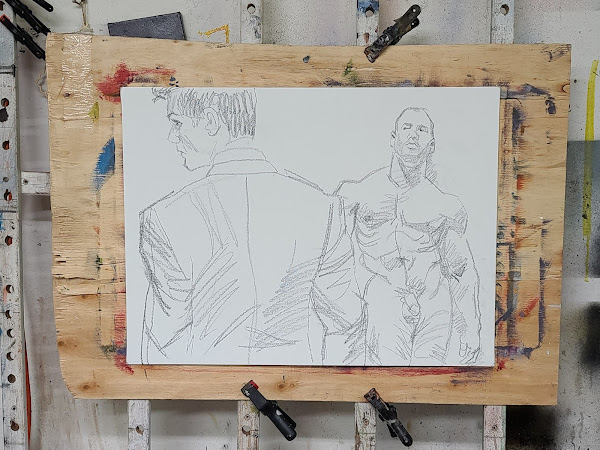 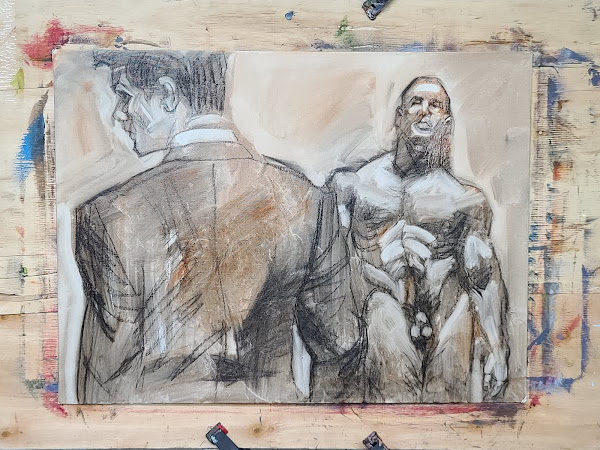 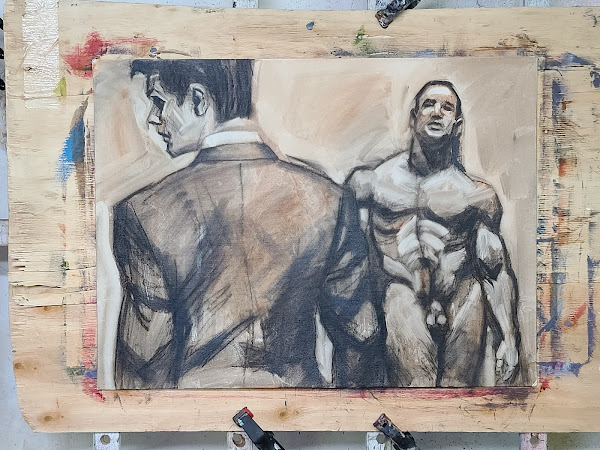 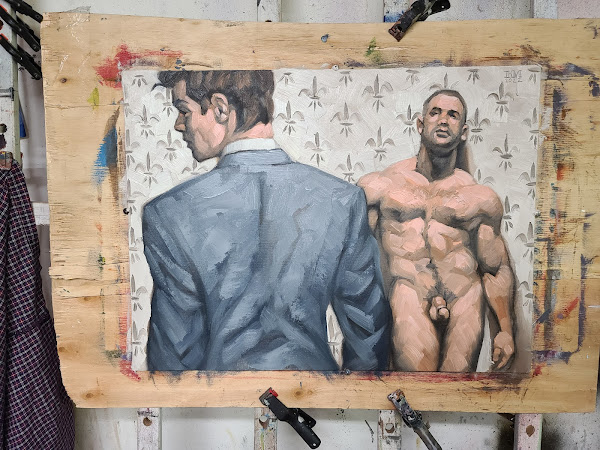 Posted by Kenney Mencher at 8:46 AM No comments:

Posted by Kenney Mencher at 2:45 PM No comments:

Tempera
A tempera medium is dry pigment tempered with an emulsion and thinned with water. It is a very ancient medium, having been in constant use in most world cultures, until in Europe it was gradually superseded, during the Renaissance, by oil paints. Tempera was the original mural medium in the ancient dynasties of Egypt, Babylonia, Mycenean Greece, and China and was used to decorate the early Christian catacombs. It was employed on a variety of supports, from the stone stelae (or commemorative pillars), mummy cases, and papyrus rolls of ancient Egypt to the wood panels of Byzantine icons and altarpieces and the vellum leaves of medieval illuminated manuscripts.

True tempera is made by mixture with the yolk of fresh eggs, although manuscript illuminators often used egg white and some easel painters added the whole egg. Other emulsions have been used, such as casein glue with linseed oil, egg yolk with gum and linseed oil, and egg white with linseed or poppy oil. Individual painters have experimented with other recipes, but few of these have proved successful; all but William Blake's later tempera paintings on copper sheets, for instance, have darkened and decayed, and it is thought that he mixed his pigment with carpenter's glue.

Distemper is a crude form of tempera made by mixing dry pigment into a paste with water, which is thinned with heated glue in working or by adding pigment to whiting, a mixture of fine-ground chalk and size. It is used for stage scenery and full-size preparatory cartoons for murals and tapestries. When dry, its colours have the pale, mat, powdery quality of pastels, with a similar tendency to smudge. Indeed, damaged cartoons have been retouched with pastel chalks.

Egg tempera is the most durable form of the medium, being generally unaffected by humidity and temperature. It dries quickly to form a tough film that acts as a protective skin to the support. In handling, in its diversity of transparent and opaque effects, and in the satin sheen of its finish, it resembles the modern acrylic resin emulsion paints.

Traditional tempera painting is a lengthy process. Its supports are smooth surfaces, such as planed wood, fine set plaster, stone, paper, vellum, canvas, and modern composition boards of compressed wood or paper. Linen is generally glued to the surface of panel supports, additional strips masking the seams between braced wood planks. Gesso, a mixture of plaster of paris (or gypsum) with size, is the traditional ground. The first layer is of gesso grosso, a mixture of coarse, unslaked plaster and size. This provides a rough, absorbent surface for ten or more thin coats of gesso sotile, a smooth mixture of size and fine plaster previously slaked in water to retard drying. This laborious preparation results, however, in an opaque, brilliant white, light-reflecting surface, similar in texture to hard, flat icing sugar.

The design for a large tempera painting traditionally was executed in distemper on a thick paper cartoon. The outlines were pricked with a perforating wheel so that when the cartoon was laid on the surface of the support, the linear pattern was transferred by dabbing, or "pouncing," the perforations with a muslin bag of powdered charcoal. The dotted contours traced through were then fixed in paint. Medieval tempera painters of panels and manuscripts made lavish use of gold leaf on backgrounds and for symbolic features, such as haloes and beams of heavenly light. Areas of the pounced design intended for gilding were first built up into low relief with gesso duro, the harder, less absorbent gesso compound used also for elaborate frame moldings. Background fields were often textured by impressing the gesso duro, before it set, with small, carved, intaglio wood blocks to create raised, pimpled, and quilted repeat patterns that glittered when gilded. Leaves of finely beaten gold were pressed onto a tacky mordant (adhesive compound) or over wet bole (reddish-brown earth pigment) that gave greater warmth and depth when the gilded areas were burnished.

Colours were applied with sable brushes in successive broad sweeps or washes of semitransparent tempera. These dried quickly, preventing the subtle tonal gradations possible with watercolour washes or oil paint; effects of shaded modelling had therefore to be obtained by a crosshatching technique of fine brush strokes. According to the Italian painter Cennino Cennini, the early Renaissance tempera painters laid the colour washes across a fully modelled monochrome underpainting in terre vert (olive-green pigment), a method developed later into the mixed mediums technique of tempera underpainting followed by transparent oil glazes.

The luminous gesso base of a tempera painting, combined with the accumulative effect of overlaid colour washes, produces a unique depth and intensity of colour. Tempera paints dry lighter in value, but their original tonality can be restored by subsequent waxing or varnishing. Other characteristic qualities of a tempera painting, resulting from its fast drying property and disciplined technique, are its steely lines and crisp edges, its meticulous detail and rich linear textures, and its overall emphasis upon a decorative flat pattern of bold colour masses.

The great Byzantine tradition of tempera painting was developed in Italy in the 13th and 14th centuries by Duccio di Buoninsegna and Giotto. Their flattened picture space, generously enriched by fields and textures of gold leaf, was extended by the Renaissance depth perspectives in the paintings of Giovanni Bellini, Piero della Francesca, Carlo Crivelli, Sandro Botticelli, and Vittore Carpaccio. By that time, oil painting was already challenging the primacy of tempera, Botticelli and some of his contemporaries apparently adding oil to the tempera emulsion or overglazing it in oil colour.

Following the supremacy of the oil medium during succeeding periods of Western painting, the 20th century saw a revival of tempera techniques by such U.S. artists as Ben Shahn, Andrew Wyeth, and George McNeil and by the British painter Edward Wadsworth. It would probably have been the medium also of the later hard-edge abstract painters had the new acrylic resin paints not proved more easily and quickly.

Gesso according to the Brittanica,

(Italian: "gypsum," or "chalk"), fluid, white coating composed of plaster of paris, chalk, gypsum, or other whiting mixed with glue, applied to smooth surfaces such as wood panels, plaster, stone, or canvas to provide the ground for tempera and oil painting or for gilding and painting carved furniture and picture frames. In Medieval and Renaissance tempera painting, the surface was covered first with a layer of gesso grosso (rough gesso) made with coarse, unslaked plaster, then with a series of layers of gesso sottile (finishing gesso) made with fine plaster slaked in water, which produced an opaque, white, reflective surface.

In the 14th century, Giotto, the notable Italian painter, used a finishing gesso of parchment glue and slaked plaster of paris. In medieval tempera painting, background areas intended for gilding were built up into low relief with gesso duro (hard gesso), a less absorbent composition also used for frame moldings, with patterns often pressed into the gesso with small carved woodblocks. Modern gesso is made of chalk mixed with glue obtained from the skins of rabbits or calves.

Courses on Udemy:
Posted by Kenney Mencher at 2:38 PM No comments:

Email ThisBlogThis!Share to TwitterShare to FacebookShare to Pinterest
Posted by Kenney Mencher at 9:26 AM No comments:

Email ThisBlogThis!Share to TwitterShare to FacebookShare to Pinterest
Posted by Kenney Mencher at 9:24 AM No comments: 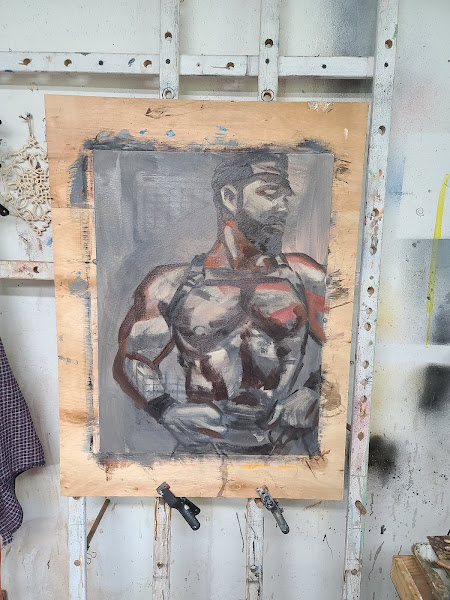 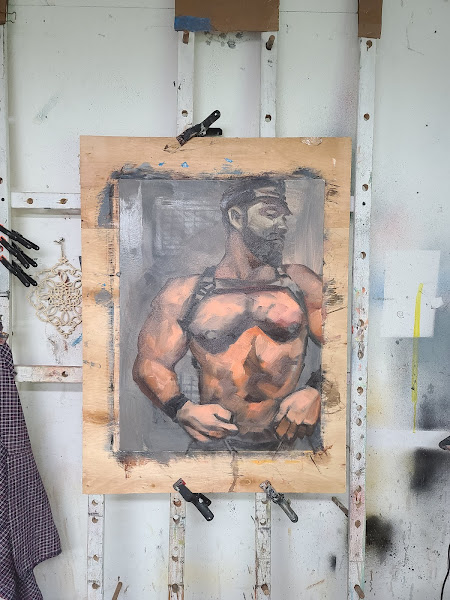 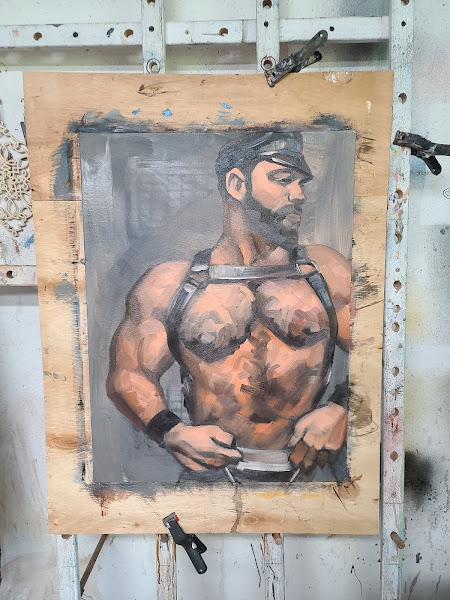 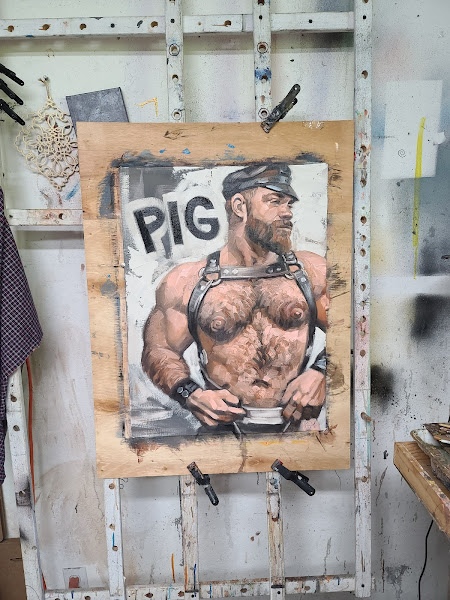 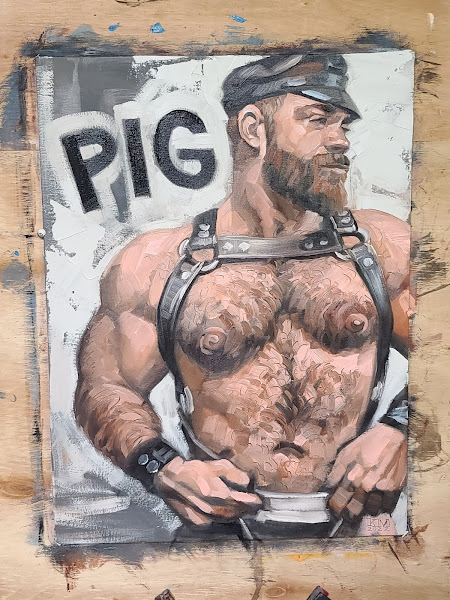 Posted by Kenney Mencher at 8:46 AM No comments:


Posted by Kenney Mencher at 2:30 PM No comments:

Posted by Kenney Mencher at 11:50 AM No comments: