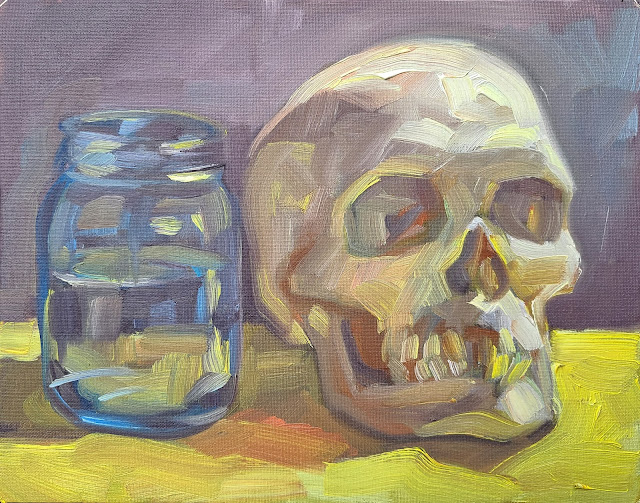 I had a couple of things in my mind when I painted this.

I’m never sure how much art historical info my clients have so me just summarize that this is a “Vanitas” also called a “memento mori.” Basically, in Latin, one means he painting that deals with the vanity of human ego and life and the other term is literally a reminder or memento of death. I suppose because I had so many health problems in the last year and a half, I’ve become acutely aware of the aging process and how unimportant I am and also what my former ego tripping was about. I don’t want it to get too depressing about it but, I just sort of realized my place in the world in the last couple of years is not as grand as I had fantasized. So, the half jar or glass of water is a representation of the cliché having to do with “half-empty half-full” and the skull obviously of Hamlet’s soliloquy is a sort of reminder of where we all end up. It’s kind of a “point of view” painting.

Some of the ideas, granted are a little sad, but are about perspective and even the fact that I painted something outside of my normal subject matter is something that I’ve been discussing quite a lot in therapy with my shrink.

In terms of the formal or physical qualities, I’ve been really trying to keep thickening the paint and the paint texture and play more with color in my paintings. This is one of the few paintings that’s also painted directly from observation. I had actually set up a still life on a table next to my easel.

Posted by Kenney Mencher at 2:01 PM