An Interview with Kenney Mencher

Mainly, I paint men because I’m better painting men and women. However, there are several other reasons why I’m more comfortable painting men. Probably the biggest reason is because I don’t feel like I’m exploiting the men I choose to paint versus, when I painted women, especially young women, I feel like I’m exploiting them. I don’t want to paint is known as “the male gaze.”

There is a longer story involved with why I paint men. It starts with painting I did in 2004 or so and it was picked up by a blogger on Tumblr named "Chubby Jay" who shared the sh!t out of it.  It’s called “Shared Space.”

The second reason why I paint men is because of the guidance that I got from a friend of mine who really appreciated the paintings that I was already doing of handsome men.  My florist, David Braddy, who I buy flowers from every week for my partner suggested/asked me to paint some beautiful men for him. His friends came over and started to literally try to swipe the paintings from his walls.  So, I made more and started to sell them parallelly to my other subject matter such as film noir and photobooth stuff.

Another reason has to do with my identity as a middle-aged man and also someone who has been in relationships with men when I was much younger as well as the fact that I’ve been accused of being “queer” my entire life. In fact my older brother who is gay and has been married to the same man for close to 30 years used to call me “Kenney Queer” when I was in junior high school after he heard a girl referred to me by that nickname while we were on the Hebrew school bus.

I realized a while ago that I look like many of the men who collect my art and that I look like a bear. After I watched a video on marketing by Michael Cuffe in which he talked about a young woman who painted subjects that looked like her, I thought, that I should be painting men who look like me.  A byproduct of this is that I began to realize why my wife and many of the men who I was friends with found me attractive. Painting older gay men, especially bears, taught me to appreciate my own beauty.

---Do you identify as straight?

Yes. I suppose that when people ask me what my orientation is I tell them that I’m a straight man because I’m married to a woman. However, in my head I often identify myself as being “queer” or on the spectrum. It’s funny because in conversation out tell people and straight but when I’m taking surveys, for example etsy.com just sent me a survey asking me who I identify as I clicked off on the LGBTQ+  box. 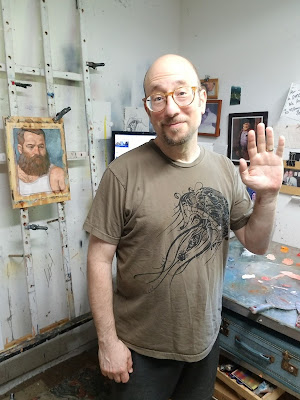 ---Do people respond differently to your work when they find out that you are not into having sex with men?

I don’t think people respond differently to my work when they realize that I’m not sleeping with men but they do sometimes behave as if they don’t believe me. I think it’s because I do it so well and I think that I often and confusing for people because of the way I behave and the things that I talk about.

In fact, many of my friends are incredulous the first time I tell them that I’m straight. I think it’s because, strictly speaking, in terms of my attitude and my belief system I don’t fit into that narrow definition.

---What would you say to someone who says you are pandering to the LGBTQ+ community? 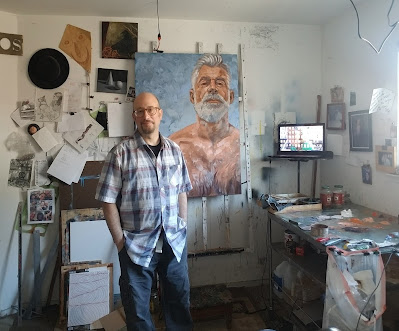 Well, I don’t believe I’m pandering, I think I’m am fulfilling the needs of an audience and group of people that appreciate the point of view that I’m promoting. I also paint non-binary people, black people and other people of color. And the reasons why paint for these audiences is that there underrepresented and I also feel like it is a politically powerful and supportive thing to do.  I do think I was “pandering” to straight males when I painted pinup style women.  I felt really uncomfortable doing that because I was perpetuating a system that degraded women.

I suppose if I really needed to justify my reasons for painting LGBTQ+ is that I actually have some skin in the game. When I was young man, I had multiple same-sex partners and even today I’m still “accused” or identified by homophobes as a gay man when they don’t know anything about me.

Aside from that, most of my friends, family, and social acquaintances are from LGBTQ+ community as well as people of color. In a way, I guess I’m painting for my friends and family.

---How do you find the models you work with?

In the beginning when I first started painting homoerotic subjects, I did some photo shoots with my friends and my family and these early paintings are from that time. 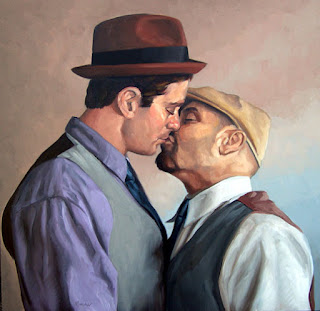 However, as my thoughts and subject matter evolved, it was hard for me to get the kind of reference material that I wanted by using people I knew so I started to collect images from various photo sharing platforms and other Internet sources.

Lately, the majority of my reference material comes from soliciting my collectors, self-portraits, and I’m working with several photographers. For example, I have another friend named Benjamine Lester who specializes in painting bears as well and he sent me this photograph of himself so that I could paint him. 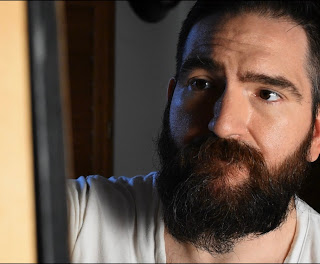 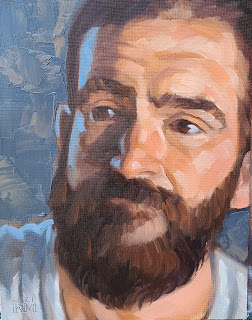 The photographer that I worked with the most is a wonderful artist who lives in France named Vincent Keith who specializes in photographing bears, which are my favorite subject. You can find his work on this website,

I kind of have a fantasy of collaborating with Vincent by having a show in which his photographs are juxtaposed against the paintings that I made using them as reference material. You really need to check out this guy’s work! The lighting and the subject matter are exactly the kinds of things that I like to paint.

---What is your favorite painting you've done?

I actually don’t have a single favorite painting or image that is my favorite. I always feel like the next painting I do is gonna be that breakthrough painting that’s the best thing that I’ve ever done.

---How long have you been a full time artist? Do you have any advice for other queer artists wanting to go full time? (feel free to plug your online business video stuff as much as possible) 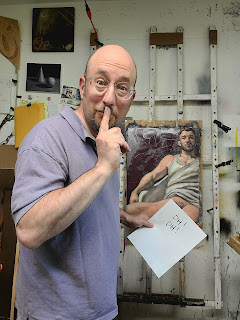 In 2016 at the age of 51, I resigned my full-time tenured professorship at Ohlone College in Fremont California where I curated the art gallery and taught art history and fine arts courses and became a “full time” artist. I had been a teacher for 25 years and a professor at Ohlone 17 years.

Part of the reason why I resigned or “retired” was that the school had been violating the rights of the students by not captioning videos that I had made for online courses. I eventually had to report the school to the ADA.

A was put in touch with some lawyers who used my initial complaint to implement a class-action suit on behalf of the students against the school. Eventually, the school had to fall into compliance with the American Disabilities Act by captioning all professors’ videos at the college. However, by that time I was in so much hot water socially with the administration and other professors that I was viewed as a troublemaker.  I felt like I was being “hazed” and so I took stock of whether or not I wanted to continue on as a professor. 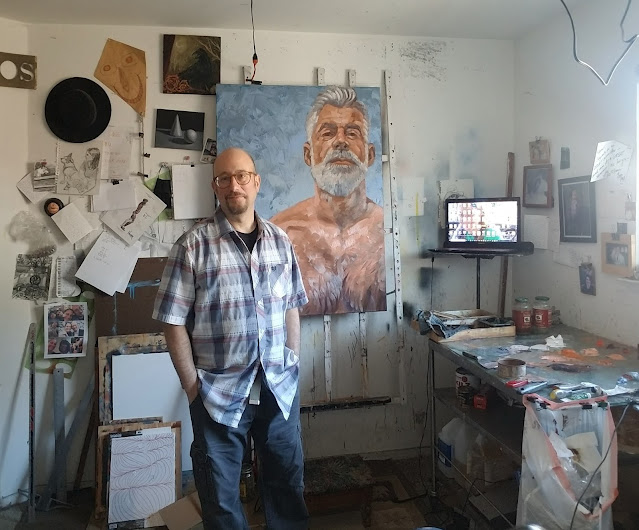 At that point I had been phasing out working with commercial galleries because they censored my work and it just wasn’t very profitable.  I began selling my work directly to collectors especially online through my website and Etsy.com and my income was growing enough that I could envision a career selling work directly to collectors and I’m happy to say that, thanks to my collectors’ support, it’s working.

I think what helped me to understand that I could do all this was that I the director of the Louie Meager Art Gallery on Ohlone College’s campus.  In conjunction with this I taught classes on gallery and curatorial practices. Teaching allowed me to try my ideas out an experiment with them. I actually still offered for free on this website.

Black is beautiful!  I actually work with a brand of lithographic crayon called “William Korns’ Litho Crayon”  It only comes in black but it’s a pretty incredible crayon.  It’s slightly water soluble and is the first thing I put down on paper.  I rarely use pencils, but when I do, I use Ebony pencils which also have a beautiful velvety black too.

---What projects are you working on now and what will you be exploring coming up next?

I’m collaborating more with my collectors and photographers, such as Vincent Keith to get more complex and interesting reference material.  I’m also planning out a photo shoot in San Francisco where I’ll put out a call to my collectors and friends and invite them to let me photograph them to make paintings from.

I have a pretty predictable cycle of how I work.  I just completed a series of 20 or more works on paper, drawings and watercolors, that are the preliminary works that I use to visualize whether or not they will become oils.  The oils that I make from these are usually between 9x12 to 18x24 inches in size.  Once these oils are completed then I often take the most successful ones and repaint them once again as large 36x48 inch paintings on stretched canvas. 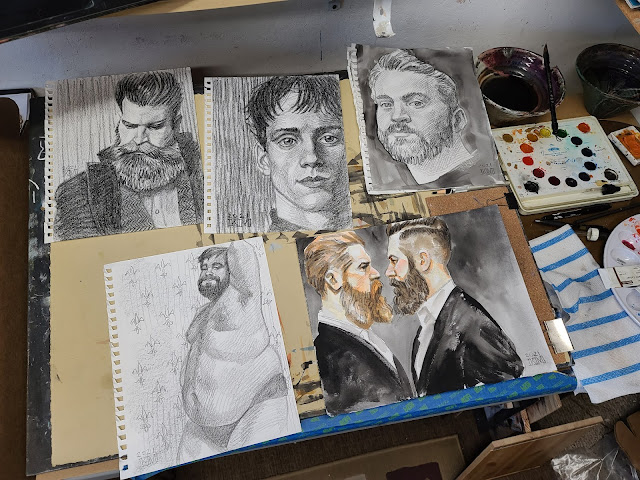 I’ve done some minor renovations in my studios and been able to install a bunch more slots in my vertical racks that now hold ten more 36x48 inch blank canvases.    These larger works are so expensive that I think that they are a harder sell on the web so I’ve been considering either renting a gallery space in Provincetown, Palm Springs or even San Francisco and having my own pop-up show, but, if I found a gallery that is really influential maybe I’ll pitch my work to them. 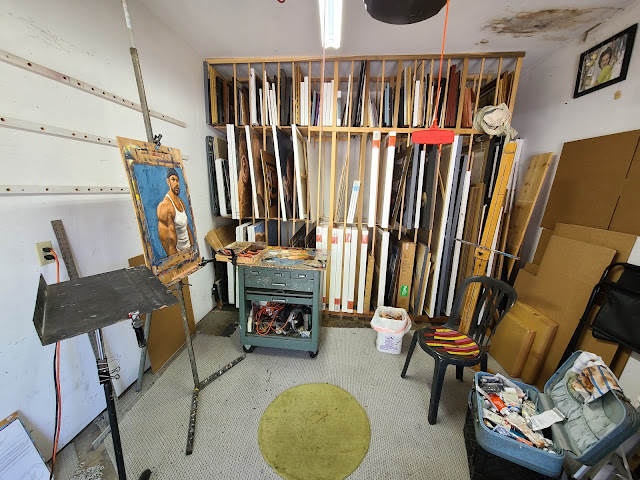 I got in touch with an influential gallery in London who shows one of my favorite artists and the director wrote back and told me to stay in touch.  It’s unusual for a gallery owner to write back directly to an unsolicited artist so maybe it means something.  Although, about fifteen years ago, Ivan Karp, from the OK Harris gallery in NYC called me and chatted me up only to explain that he just called to encourage me to keep working in the direction I was going but that he couldn’t take me on as an artist at that time.

I'm turning 57 in February and all of the health scares of the last year and a half (triple bypass surgery and kidney stones) have made me acutely aware that I may not be around forever.  I'm all healed up but I feel like my mortality is reminding me I need to work harder and make better paintings.  I’m not even sure what a better painting looks like but somehow, I learn so much from the big ones that I actually use what I’ve learned in the smaller easier paintings.

Posted by Kenney Mencher at 5:30 PM