Opinion, Why we should remove monuments. 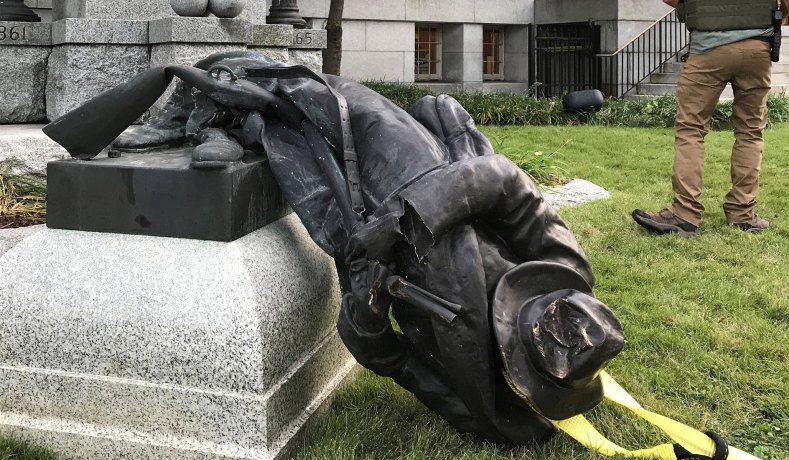 Just because something is part of history that doesn't mean it has intrinsic, moral, or artistic value as an artifact. People can educate themselves through books and other sources. Preserving an "artifact" that symbolizes racism, such as a Confederate flag or a sculpture depicting a supporter of racist regimes, such as Columbus or Robert E. Lee communicates a support for these ideologies. Removing or defacing a monument does not destroy the history it protests the value of its legacy.

What about putting them in museums?  How would that work?

Museums don't want them for a variety of reasons. It's not viable to devote an entire exhibition to things like this. Think about an entire 3 to 4 room exhibit of even small lawn jockey sculptures wouldn't be received well. Second problem, storage, these statues are literally monumental. Hard enough storing medium sized marbles. Money and expense of shipping and moving. So while it seems like having them recontextualized might be cool it's a logistical nightmare. There are various instances where later artists altered or changed the existing sculptures. One in Latin America (I think) squashed the sculpture of a conquistador between two large blocks of concrete. Another sculpture of open hands in front of a police station had red paint poured into the palms. Perhaps surrounding the sculptures with other symbols or really having plaques and other things around the existing monuments could change the meanings and give contemporary artists a chance to interact or change the meaning if the monument. In a way, that's what the protesters are doing.

I also would like to suggest that in the USSR, Germany, Italy, and other places monuments are and were regularly removed, melted down, and or replaced during and long after regime changes all the way back to Egypt and Mesopotamia.  People who argue to preserve monuments in their original locations are essentially arguing an opinion without basis in historical facts.  "Preservers" are making the argument based on an opinion of moral rectitude much like the anti racist Americans who would like the monuments removed for moral reasons.

Posted by Kenney Mencher at 3:18 PM