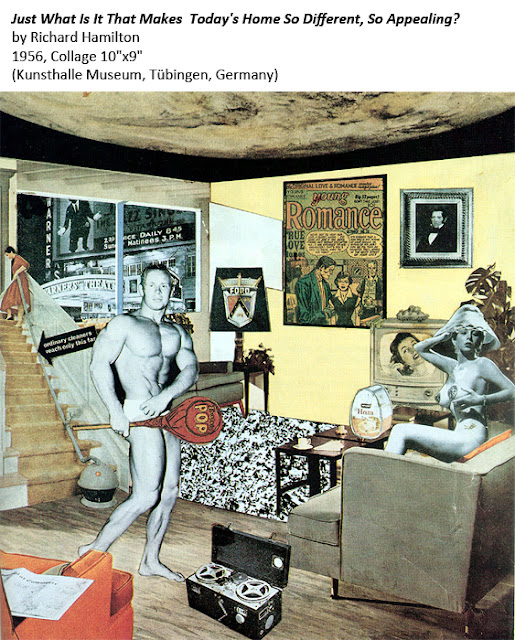 Today, looking back more than 50 years this work has a particular resonance in the fact that we are still a bunch of ridiculous white middle-class people who are the targets of click bait designed to sell us shift we don’t need.

That’s basically the message of this collage by Richard Hamilton. It’s is one of those top 40 art history works of art that I guess everyone should know about since it’s in all the history books. Of course, there’s a little more to it than that however, this is one of the first or originating collages that fully express some of the ideas evidenced by the pop art movement of the 1960s. The date of this collages 1956 which makes it literally the forward guard, or avant-garde, works of its time.

Like most collage that you would see in an art history book our imagination when seeing the image doesn’t connected to the size that’s listed under the image. In my mind the first time I saw this collage in an art history class I assumed it was 18 x 24” or super large. Possibly in the 5 to 4 foot range. It’s not it’s a tiny piece that’s about the size of the piece of printer paper. In fact it smaller it’s 10 x 9”. When you think about it this makes total sense because all of the images in this collage were cut out of magazines whose magazine size was probably no larger than 11 x 14” and many of these are small feature photos or from advertisements. One even includes a thumbnail from a comic book. Since it’s a small version of the cover of a comic book it makes the piece look somewhat monumental. It is monumental in terms of the ideas it contains and how it looks at popular culture of the 1950s.

The context of this is a little bit important too. For example, a couple of little ideas that seem to amplify the meaning is that Richard Hamilton was an English artist who was associated with some other highbrow artists, most notably Marcel Duchamp. If you look at Richard Hamilton’s history or a sort of resume ill see that he attended all the best schools and knew all the right people. This means that even though other people might have tried to make collages with similar messages this one in particular made it to the top because Richard Hamilton was associated with good schools and even better artists.

Nevertheless, the fact that this piece of art was made from a privileged point of view, and almost wealthy well-educated white man from England, it critiques the culture from which Richard Hamilton grew, most notably the wealthy elite capitalist crowd. Warhol is the same way a couple of years later in that he knew all the right people, many of which were placed in such a way that would make him wealthy or well-known. And, Hamilton and Warhol both sort of bit the hand that fed them. How did they do this? They did it by dissecting their own culture literally by cutting up magazines or dissecting the images in magazines and putting them together in a collage in a way that changed what each one of the symbols or images cut off would mean. 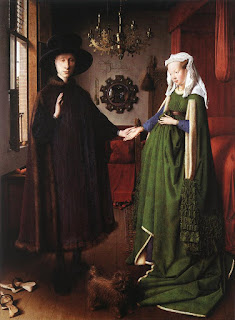 Rather than go through every single nuanced image I think that looking at it as a whole and describing it as a scene is the best way to think about it. Two young beautiful characters are inside a living room in the 1950s that has all of the latest innovative products such as tape recorders, vacuum cleaners, reading literature, antique oil paintings, and of view outside of a large picture window of the theater whose marquee shows a popular film from the previous era. This scene is almost in its content a replica of Jan van Eyck’s “The Arnolfini Wedding Portrait,” in that it shows a young well-to-do couple who happen to be very good-looking standing in a luxurious interior.

It’s the choices of the products and images that make it a sarcastic jab at consumer culture. Incidentally, Jan van Eyck’s painting is come under serious reinterpretation in that it might represent exactly the same thing.

See my blog post about the painting by Jan van Eyck.

These characters are ridiculous and made more ridiculous by the addition of the lampshade uses a hat, and a large sucker placed where the weightlifter sucker is. The luxurious products scattered around the room are clearly advertisements of new consumer products that the new industrialized nations were trying to foist on the new bourgeoisie. Same thing in the Jan van Eyck portrait as well. We’re seeing luxury goods presented to ridiculous foppish people.

A lot of the books will wax poetic about the various products being presented and how clever the choices Richard Hamilton made in choosing things like the ham, or the tootsie pop, or even the romance novel poster, but what I believe is that it was almost a random choice the same way magazines almost without a pattern present advertisements. The single unifying theme of the magazines advertisements seem to be the economic ability of the advertisements targets. So when Hamilton chose his images, he chose them from magazines that would’ve been in his home a privileged upper-class white English male. 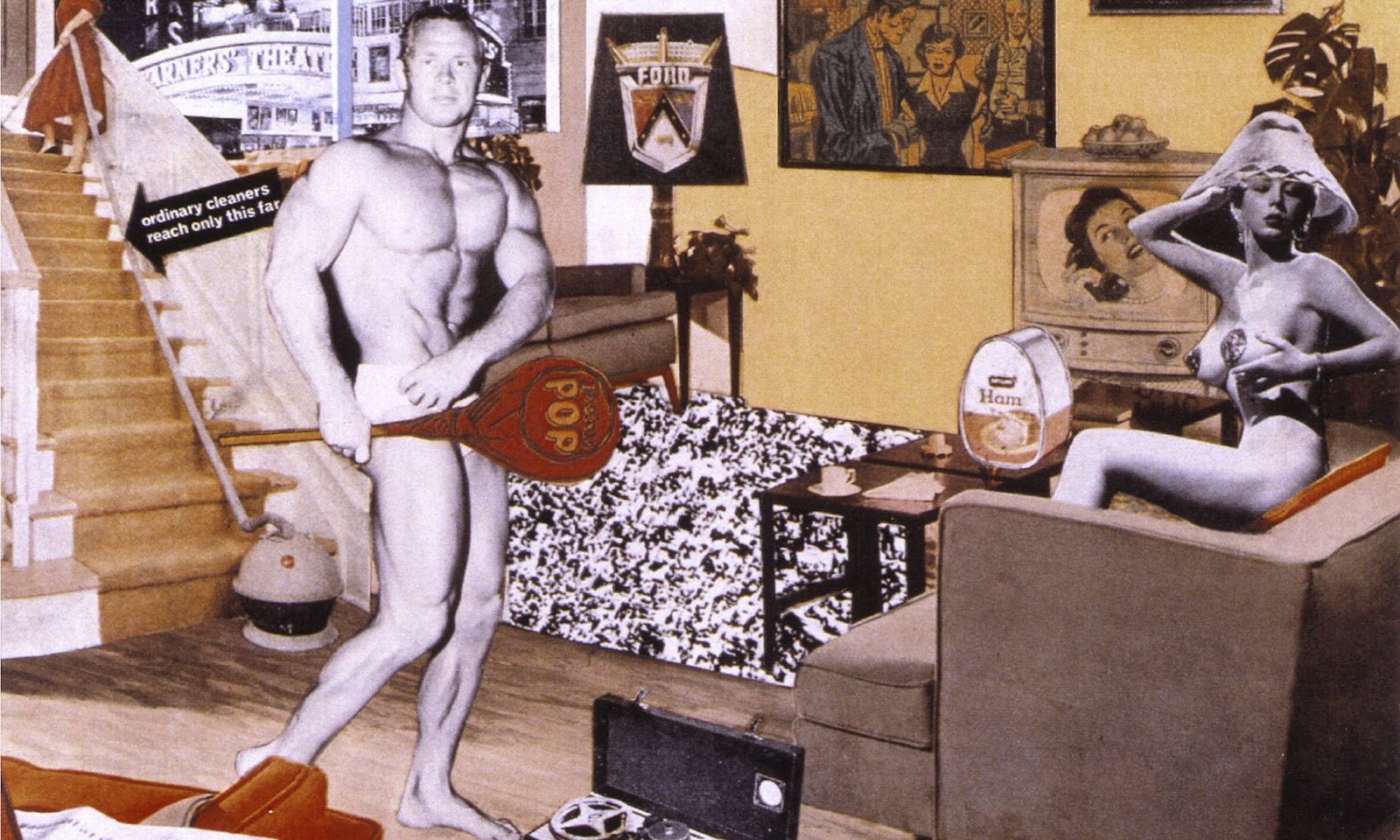 Posted by Kenney Mencher at 1:00 AM