It shouldn't be called "The Arnolfini Wedding Portrait," 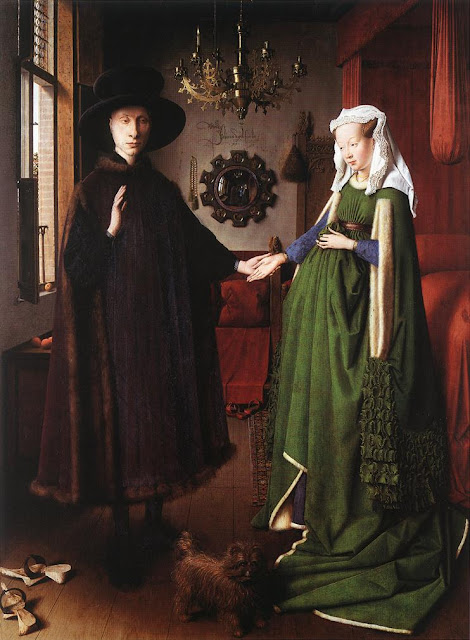 This painting was made by Jan van Eyck  in 1434.  It's super important in terms of its relationship to art history but the way it is taught is probably wrong.

Here are the facts.

It's a great example of Renaissance oil technique.  It is one of the earliest paintings to be made with oil paint. Previously to this, paintings were usually made either with egg tempera or were fresco on plaster walls. 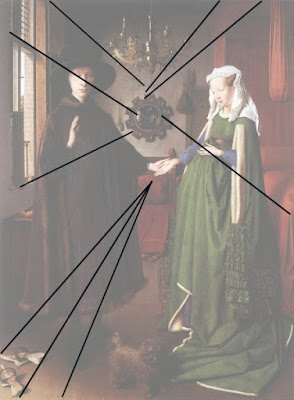 Irwin Panofsky, and art historian in the early to middle parts of the 20th century, base the title “The Arnolfini Wedding Portrait,” on finding an obscure reference to a wedding between two people from Italy that were staying in the northern part of Europe known as Flanders.

Years later another historian placed the wedding in 1447, 13 years after the date on the double portrait and six years after van Eyck's death. So interestingly enough the analysis of the symbols and the subject matter of the painting by Irwin Panofsky is probably incorrect, however, some historians insist on teaching the older interpretation of this painting and we are stuck with a title that is inaccurate.

The most recent and I think credible interpretation of this image is that the painting represents a kind of scene of everyday life called by art historians as a “genre scene.”  It is a kind of sarcastic statement about wealth and morality.  (There are plenty of examples of this, for example "The Money Lender and His Wife"  and the "ill matched couple" themes in painting.  That the scene might be an indictment of the wealth of some Renaissance businessmen.  The obvious wealth of the clothing, furniture and other items, even the dog is a type of “toy” dog and might be just a rich person’s plaything.

The original, and I think incorrect interpretation is Panofsky’s.  According to Panofsky, who based his interpretation on a document that does not seem to coincide with the right dates, this painting is that it’s a couple getting married in the sacred wedding chamber. The poses of the two individuals indicate that the woman is putting her hand in the hands of her new husband. The bare feet represent that they are on sacred ground and this is a sacred event.

The placement of the woman near the bed and the man near the window has significance for Panofsky as well in which he thought that it was a representation of what they did as a couple. The wife stayed home near the bedroom, and the husband usually leaves the home and is in a different realm. The chandelier with a single candle has been discussed a lot maybe it’s supposed to represent the light of God.  The dog might represent fidelity.  The green of the gown could represent spring time and fertility.  The woman is not pregnant but the extra amount of material in her gown is held up against her stomach and at a glance could be mistaken for the stomach of a pregnant woman.
The mirror in the background contains the back of the two figures and the artist who is painting the couple’s portrait, the reflection combined with the inscription that translates “Jan van Eyck was here.” for Panofsky this could be interpreted as Jan van Eyck witnessing the wedding contract but since they were married in 1447 but the painting was made in 1434.  Jan van Eyck would have to have been able to see the future if Panofsky was correct.

Posted by Kenney Mencher at 9:10 PM