Form: Cathedrals, in general, were made completely of stone for permanence. The construction of the cathedral, although derived from the basilican plan, is a non-uniform shape.  The addition of the transept and the bays in the apse tend to make the shape fairly irregular. 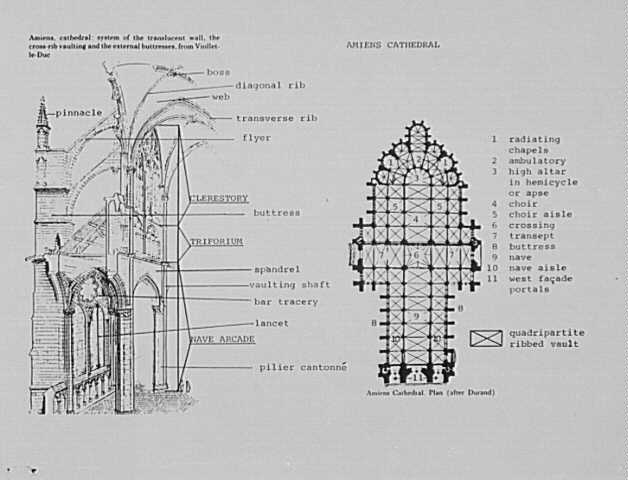 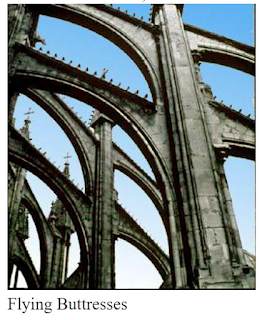 Structurally, the Gothic Cathedrals differed with their use of huge soaring structures known as 'flying buttresses'. These beautiful structures did for the Gothic Cathedrals what rounded and barrel vaults did for Romanesque churches, supported them, except they were located outside the church. They provided  a sort of exoskeleton (made of stone) for the structure as well as lending a visual sense of fragility and beauty to the look of the church, though in reality they are quite strong. Made of iron rods with stone and concrete encasing them, these buttresses are the main support as well as the main source of architectural beauty for these massive buildings.

As well as sculpture and architecture, the Gothic cathedrals brought about the advent of the 'Rose' style stained glass window. These are enormous glass window n the shape of a 'rose' and found on the facade of the Gothic cathedrals. It is supposed to represent purity, like a rose, and is symbolic of the Virgin Mary. True to Gothic symbolism and the Jesus motif, a rose also has thorns on the stem, which can also be representative of the crown of thorns worn by Jesus as he walked through the streets bearing the cross towards his crucifixion. 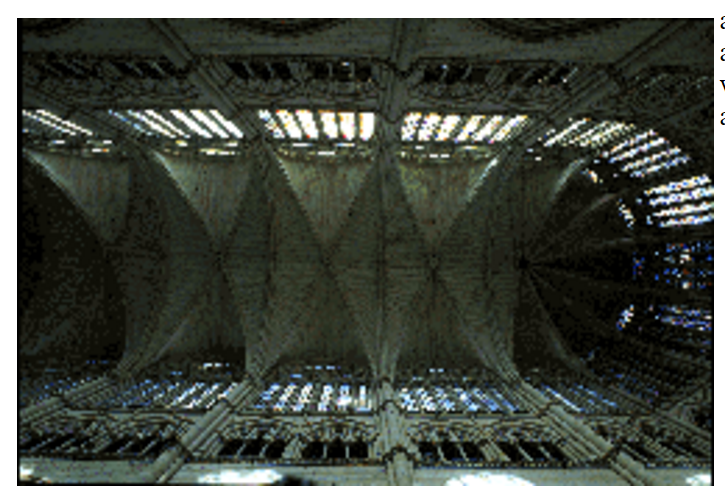 Iconography: Quatrefoils at the base of the cathedral serve a didactic purpose.  The quatrefoils each tell stories. The exterior serves a didactic purpose (teaches about Christianity). According to Stokstad, quatrefoils contain relief sculptures that greet worshippers as they enter the cathedral and are used to tell biblical or morality based stories. These usually focus on the themes of Good vs. Evil, the lives of the saints, biblical allegories as well as seasons of the months.

Context: Construction of cathedrals, such as Amiens' Notre Dame, were a labor of love that went on for decades and sometimes centuries.  Often entire generations of families would be at work on the cathedrals as an expression of transgenerational love for god. 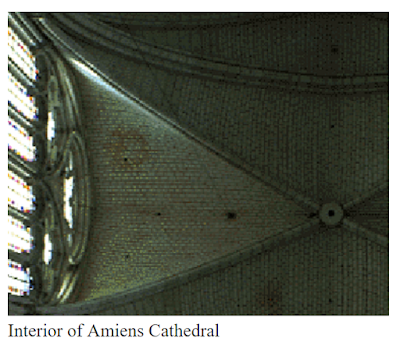 The purpose of Gothic Cathedrals was to make the worshiper feel as thought they were truly in the presence of God. The high, imposing ceilings, awe-inspiring stained glass windows and enormous buttresses dwarfed the worshipers as they entered the building and inspired a sense of awe.They were also monuments to the power of the monarchy of the time and were central fixtures in the urban centers. In this time period, much of daily life revolved around religion and a strict adherence to the will of the laity as well as the ruling monarch. This was the time of the crusades and a widespread religious fervor. 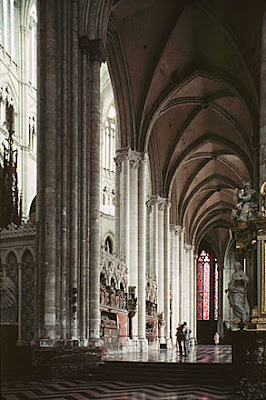 The main two design innovations evinced in Gothic architecture are the perfection and use of the ribbed groin vault and the use of flying buttresses.  Groin vaults needed massive walls to support the side stress created by them. In order to compensate for this and relieve some of the outward thrust of the traditional barrel vaults that one observes in Romanesque architecture, pointed arches were introduced.  These arches change some of the outward thrust to downward thrust.  The pointed arch also allowed for more flexibility in terms of the space that the arch could span. Flying buttresses absorbed the rest of the force generated by the arches.  Flying buttresses are essentially an exoskeleton which take a great deal of the stress off of the inner walls and allow them to be built taller and thinner and with large openings for stained glass windows.
Posted by Kenney Mencher at 6:00 AM