Why is the “Venus of Willendorf,”so important? (AP and Survey and Art History) 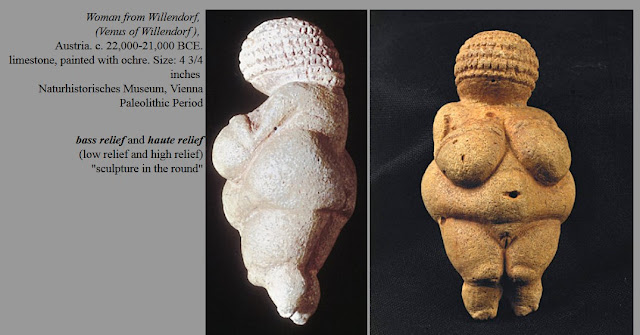 Starting with the title of the so called “Venus of Willendorf,” is now considered misnamed because most historians do not believe it is a love goddess such as we think of the Roman goddess of love and romance Venus. When it was found in 1908 by the archaeologist Josef Szombathy in the country of Austria near a place called Willendorf, archaeologists believed that “cave men” (also a term that isn’t used much) saw this figurine as a kind of ancient porno magazine. In the 1960s, after anthropology and archaeology really got going as disciplines, academics felt that the figurine probably represented an image of a woman who was sturdy, well fed, and healthy. A woman with a large amount of body fat would be nice to snuggle with during the ice age. So historians see this small sculpture in different ways and from different points of views based on when they lived, what they believe, and the culture that the person who is looking at it from. One other thing that you should know, they’ve found a lot of figurines that share very similar qualities and date from the same period.

It’s small, about 8 inches long. It was made out of stone. The feet are broken off. It has a couple of dots or small circular impressions where the face should be. The “hair” is a repeating slightly geometric pattern that looks almost like a series of ovals in rows. The breasts, stomach, butt, and thighs are very large while the arms which are crossed across the chest are almost just etched shapes. The vagina is very clearly defined. The sculpture has some traces of reddish paint on it.

There are a range of interpretations of the large body parts, the hair and the lack of realism in the features of the face and the hair. The body is very naturalistic and so are the genitals. The contrast of real looking stuff to abstract or cartoonish stuff maybe an indication that the face was less important than the body or the reverse could be true. Maybe the face was so important that there was a reason to make it just three small holes. Here’s the most reasonable explanation for what this sculpture is.

Form: Both of these sculptures are small in scale (size) and made of easily worked with and readily available materials. Both are economical in their renderings of the human form. The arms are engaged against the forms most likely to conserve material. Some aspects of the proportions of the forms are changed. The breasts and hips are very large, while the head and features are de-emphasized. Possibly, the odd proportions of the Willendorf woman were probably influenced by the original shape of the rock, not solely by the artist. However, this does not account for the similar stylization (Stokstad refers to this as abstraction) of the Dolni figure. The sculpture from Willendorf is made out of limestone. It is a subtractive sculpture (parts were carved awaye) and was originally painted with red ocher while the other was carved or molded (molded sculpture is additive) from the remains of clay and bone ash found in a fire pit. (There is another similar figure carved from hematite in Stokstad.)

Iconography: The overemphasis of the figures sexual characteristics, the breasts, stomach, and thighs are those associated with being able to carry and feed children successfully and as such represent the concept of a fertile female. Therefore these sculptures probably represent an ideal. (An ideal is a perfect example of a valued quality). The face, legs and arms are thought to have been downplayed by the artist because these are not necessary to portray the concept of a fertile female. 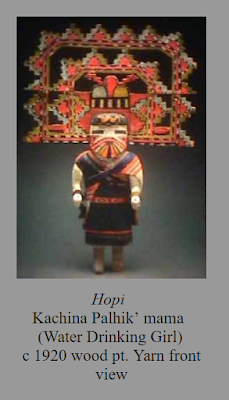 Context: We are not sure why these figures were created. It is safe to assume that they were probably sculpted in a small scale so that they were easy to carry. If compared to the Kachina figures of the Hopi peoples and one may be able to draw the conclusion that these figures served a similar purpose. They were fetish figures of some sort designed to influence the world through some sort of sympathetic magic or as a didactic tool.

The study of these figures has changed over time and so has the naming. Stokstad refers to these figures as "women" rather than "Venus" figurines because the naming of such figures influences how we interpret them.

Posted by Kenney Mencher at 9:51 PM