Why is Lascaux Cave in France so important? (AP and Survey Level Art History)

Get all the videos, and etext and study guides for $50
http://art-and-art-history-academy.usefedora.com/ 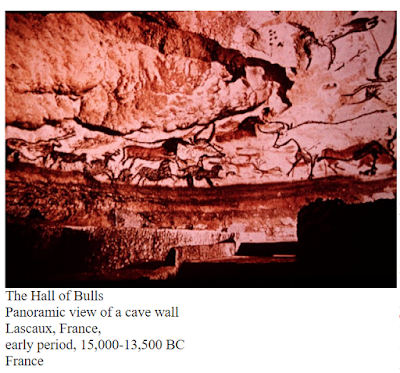 Form:  Most images from Altamira and Lascaux depict profile views of the animals done with diagrammatic contour lines.  (Not unlike the form lines used in Kwakiutl art.)  The profile view is the most effective and clear way of depicting the animals.  There is no depth or space created and the scale and sizes of the animals vary widely possibly  because these were not concerns of the artists nor are the images designed to relate to one another.

Iconography:  Bisons could represent a number of things: strength, virility, and or food. The spaces these images were painted in might have been some of the world's first churches or temples.  The caves and the ritualized descent into them may have been iconic of rejoining the earth.  Rising out of the cave might have been symbolic of rebirth.

Context:  These paintings were probably not meant purely as decoration.  The technology used is based on the available resources.   The artists that made these bison either blew the pigments on to the wall or mixed them with animal fat medium as the medium.  They used stones for palettes and made brushes or blowpipes from reeds.

The images were probable used for some kind of religious or magical  function and most likely as an attempt by early man to control his environment.  By descending into a cave, which in some ways is a sacred womb like space, early humans could paint the bison they were attempting to control.  Possibly using the images as "stand ins" for specific rituals.  The spaces they are painted in were reused over and over again.  The images are layered because they were often painted over by later artists.

Interestingly enough both the sites in Lascaux and Altamira were discovered accidentally.  In the case of Altamira, the Marquis Marcelino de Sautuola was not believed that his discoveries were legitimate and this gave rise to the use of scientific method to legitimize such finds.

Why is Lascaux Cave in France so important?

Starting with its discovery, the cave was discovered by a couple of boys trying to find their dog in the early part of the 20th century. The discovery of the cave was accidental, however, it was important discovery in the long line of some earlier discoveries mainly at Altamira but other places as well. The cave is Lascaux France is probably the most important because it legitimized some of the earlier discoveries that might’ve been questionable especially because it was discovered during a so-called scientific rational age not during the 19th century when it would being attacked or at least looked at skeptically.

Other factors that make Lascaux important are mainly due to the amount of murals found in the cave and a couple of small clay objects. Probably the most important part of the cave for a general education is the great Hall of the Bulls. The large chamber contains hundreds of overlapping paintings that were probably done over the course of literally two or 3000 years. The reason why this is important and this also shown at another cave in Chauvet France. You may want to check out “The Cave of Forgotten Dreams,” which is available on Netflix. I think just the first half hour is worthwhile the rest of the video seems like bunch of religious or mystical crap that the director wanted to get into. 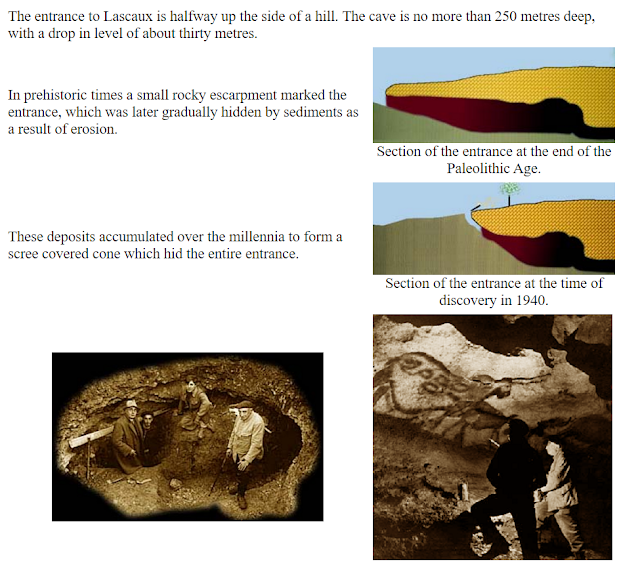 There are two really important sections of the mural in the cave. The first one is in the Hall of the Bulls.
Here are some of the more important physical and visual elements that you should be aware of in looking at prehistoric cave painting. Most paintings in caves were painted using a combination of animals fat and naturally occurring pigments that were made from ground of minerals or ground up dirt.

Get all the videos, and etext and study guides for $50
http://art-and-art-history-academy.usefedora.com/
Posted by Kenney Mencher at 9:00 AM