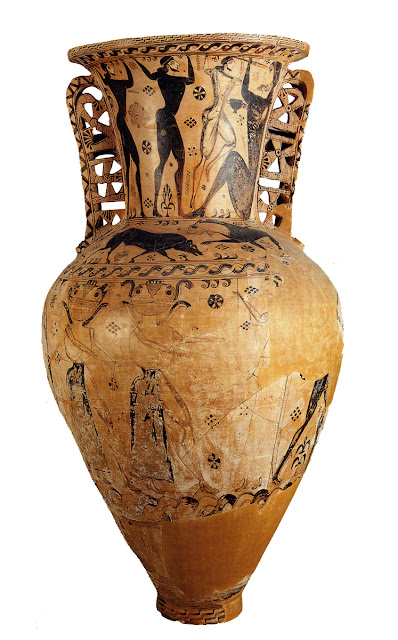 Form:  The ornamentation of this vase is organized into a series of registers or frets of almost equal size and this appears to be fairly common in black figure vases of the Orientalizing period.  Each register is devoted to a scene which depicts mythological creatures or people.  The ornamentation of the registers contains less geometricized and more naturalistic figures than the earlier geometric period's designs.  Overall the design exhibits a similar horror vacui to the vases from Knossos in that every empty space on the vase has been filled with flower like rosettes or lozenge like forms. The figures are stylized curvilinear and cartoon like.  The figures of the men in the top register are shown in a modified composite view whereas the Gorgons in the bottom most register are even more abstracted. Click on this link for more detailed views.

Developed initially in Corinth, the black-figure style in which the vase is decorated builds on the technology of earlier styles of decoration.  The natural color of the clay is used as the back ground.  Engobe is still used to create a silhouettes and touches of red purple gloss are applied here and there but the polychrome of the vase is supplemented by incising details with a sharp awl.  This is sometime referred to as scraffito.   Which means something along the order of scratched designs which is very similar to its cousin graffiti.

The vase is signed "Menaleus made me."

Iconography:  The iconography of the vase deals with mythology and legend and outlines the adventures of two clever Greek heroes: Odysseus and Perseus.  The top register depicts a scene out of Homer's "Odyssey"  the Blinding of Polyphemus.  (see Mencher Liaisons 12-14 (The Blinding of Polythemus). Odysseus or Ulysses, conquers the single eyed inhospitable Cyclops through his intelligence and scheming and therefore secures the release and safe journey of his crew.

The bottom most register depicts the three Gorgon sisters who had snakes for hair and were so hideous that if one looked upon them you would be transformed into stone.  Medusa, committed and act of hubris or hybris (an act of disrespect, excessive pride or arrogance) by lying down with Poseiden in Athena's temple.  In the tale of Perseus, he encounters the Gorgon Medusa, decapitates her and uses her head to freeze his enemies. 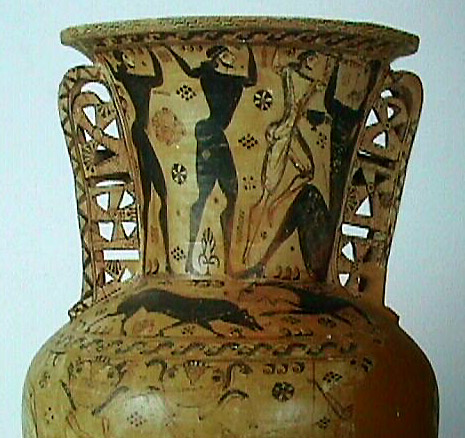 The monsters' physical attributes depicted in these tales summarize their failings.  For example, the Cyclops is short of vision and the Gorgons are ugly of spirit and the snakes represent their deceit.  The heroes are idealized versions of soldiers.  They instruct us to be clever, loyal and be a soldier.

Context:  This style represents a formal and iconographic correction of two earlier schemas.  The formal correction is that the Corinthian artists who first developed the style took the existing technology and added the engraved scraffito.   They also built on the initial designs of the geometric period and combined them with other culture's naturalistic manner of depicting animals and creatures.  The subject matter changed from a simple funerary scene to a more decorative motif. 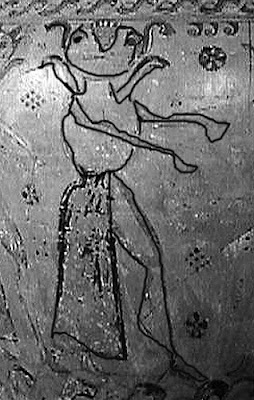 Art historians believe that these vases  have an "eastern" or "oriental" or asian kind of feeling.   Stokstad states, "the source of these motifs can be traced to the arts of the Near East, Asia Minor, and Egypt.   The term "orientalized" although an accepted art historical term seems to have a rather Eurocentric meaning.  The term seems to lump all the cultures east of Greece in this blanket term and therefore tends to generalize a bit too much.

Often you will see this vase referred to as a Proto-Attic amphora.  The term Attic refers to its origins as Athenian.  Proto- means early or before.   This term is meant to demarcate the difference between vases made in the same orientalizing style in Corinth which are sometimes referred to as Proto-Corinthian .

The status of the artist must have been on the rise in Athens as well because this is one of the first examples of artwork that has been signed.

I designed this course as a series of clear, non-jargon laden video lectures and texts designed to help any student who wants to pass AP art history and or any beginning level art history survey course.
Posted by Kenney Mencher at 2:30 PM