The Brittanica refers to Masaccio's Trinity as "rational, human-scaled and human-centred, and inspired by the ancient world."  This statement illustrates that beyond a theological point of view, the naturalistic life-size scale and placement of the figures of God the Father, The Spirit, within a Roman triumphal arch complete with Pantheon like coffers and ionic columns on the edges, represents how the Renaissance person was framing their view of the world within a classicizing and humanistic point of view.  Jesus' body is idealized and he looks almost as if he is a Greek god.  God the Father looks like a Greek or Roman philosopher and these representations make reference to the new ideas concerning neoplatonism and humanism.The neoplatonic aspect, deals with the concept of humankind's ability to be perfected to an ideal state.  One that is more spiritual and mental than flesh.  The humanistic point of view deals with the concept that while humankind is spiritual it is also physical and emotional.  When the body of Christ is depicted as a real human's body, the artist is showing you a point of view based on a more human and possibly even fallible point of view of the world.  The perfectibility of man and the ideal conception of a what a perfect person should be is discussed in Mencher, Liaisons 109-112 Baldassare Castiglione (1478-1529) Il Cortegiano (The Courtier) Excerpts from "The First Book of the Courtier"  and William Shakespeare c1600 excerpts from Hamlet 115-117All of these points of view are pulled together in by the appearance and text above the skeleton.
Above the skeleton is inscribed, "What I was you are.  What I am, you will become."  This idea that we are to be reminded of our mortality and frailty is a reminder or a lesson referred to as a memento mori.  A literal reminder of death.  This them is taken up not just in the visual arts but also in literature and theatrical productions.  Read Mencher,Liaisons, William Shakespeare c1600 excerpts from Hamlet115-117 for another example.  What kinds of iconography to they both share?

24  When they came to Capernaum, the collectors of the temple tax approached Peter and said, "Doesn't your teacher pay the temple tax?"
25 "Yes," he said. When he came into the house, before he had time to speak, Jesus asked him, "What is your opinion, Simon? From whom do the kings of the earth take tolls or census tax? From their subjects or from foreigners?"
26 When he said, "From foreigners," Jesus said to him, "Then the subjects are exempt.
27 But that we may not offend them, go to the sea, drop in a hook, and take the first fish that comes up. Open its mouth and you will find a coin worth twice the temple tax. Give that to them for me and for you."
Matthew Chapter 22
15  Then the Pharisees went off and plotted how they might entrap him in speech.
16 They sent their disciples to him, with the Herodians, saying, "Teacher, we know that you are a truthful man and that you teach the way of God in accordance with the truth. And you are not concerned with anyone's opinion, for you do not regard a person's status.
17 Tell us, then, what is your opinion: Is it lawful to pay the census tax to Caesar or not?"
18 Knowing their malice, Jesus said, "Why are you testing me, you hypocrites?
19 Show me the coin that pays the census tax." Then they handed him the Roman coin.
20 He said to them, "Whose image is this and whose inscription?"
21 They replied, "Caesar's." At that he said to them, "Then repay to Caesar what belongs to Caesar and to God what belongs to God."
22 When they heard this they were amazed, and leaving him they went away.

St. Augustine, came up with a concept in which he viewed the universe and man's existence as divided in two worlds.  One was the City of Man which was temporary and fallible.  This is represented by the architecture and the place in which the tax collectors stands and collects what is "due Caesar."  The other world is the City of God which goes on forever and in which god will provide for the faithful.  This is where Peter pulls the coin from the fishes mouth.Stokstad points out that this story was also used as a propagandistic tool and a way of instilling patriotism for Florence and raising funds.


Here's an example of two point perspective in a painting.  This painting actually has multiple points on the horizon line but I've traced most of the orthagonals to the two most dominant ones in the black and white illustration.
Here's how Giotto kind of had it right. 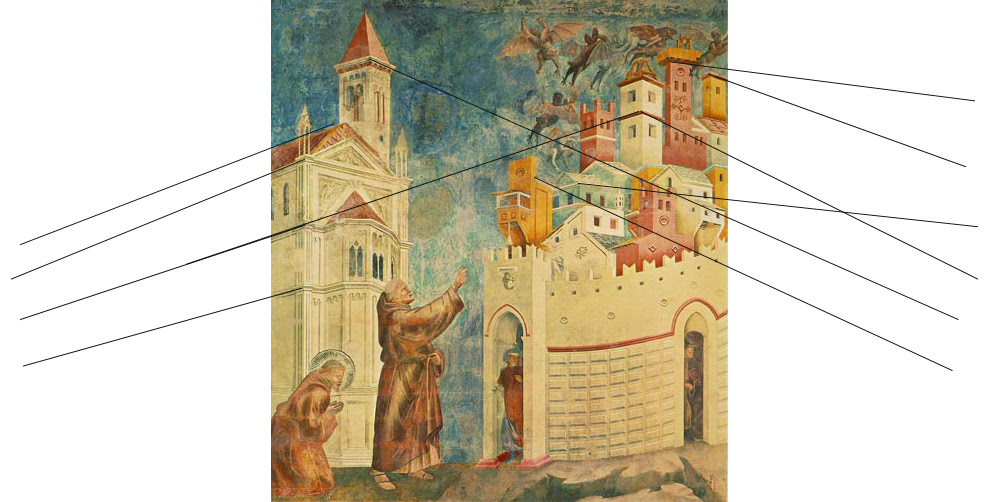 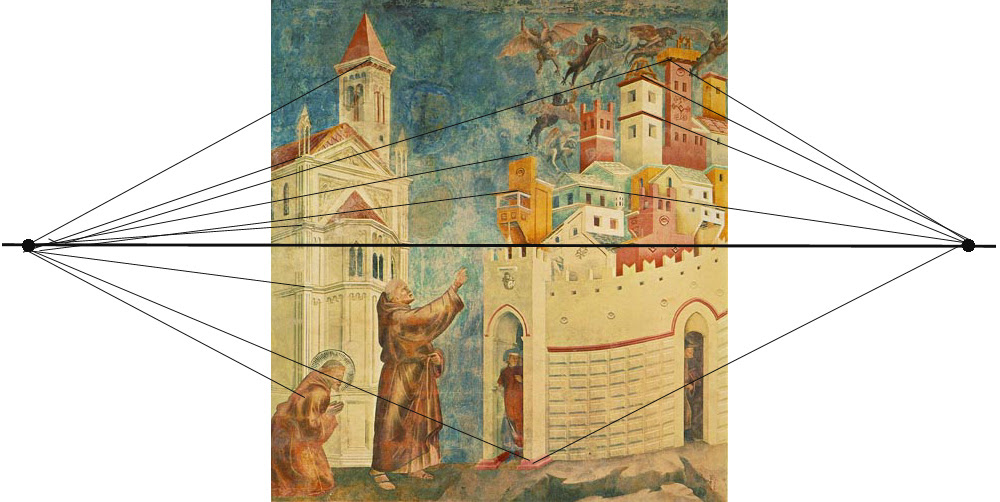 hu.man.ism n (1832) 1 a: devotion to the humanities: literary culture b: the revival of classical letters, individualistic and critical spirit, and emphasis on secular concerns characteristic of the Renaissance 2: humanitarianism 3: a doctrine, attitude, or way of life centered on human interests or values; esp: a philosophy that usu. rejects supernaturalism and stresses an individual's dignity and worth and capacity for self-realization through reason -- hu.man.ist n or adj -- hu.man.is.tic adj -- hu.man.is.ti.cal.ly advme.men.to mo.ri n, pl memento mori [L, remember that you must die] (1596): a reminder of mortality; esp: death's-head
me.men.to n, pl -tos or -toes [ME, fr. L, remember, imper. of meminisse to remember; akin to L ment-, mens mind--more at mind] (1580): something that serves to warn or remind; also: souvenir
Neo.pla.to.nism n (1845) 1: Platonism modified in later antiquity to accord with Aristotelian, post-Aristotelian, and oriental conceptions that conceives of the world as an emanation from an ultimate indivisible being with whom the soul is capable of being reunited in trance or ecstasy 2: a doctrine similar to ancient Neoplatonism -- Neo.pla.ton.ic adj -- Neo.pla.to.nist n
trompe l’oeil - (French: "deceive the eye"), in painting, the representation of an object with such verisimilitude as to deceive the viewer concerning the material reality of the object. This idea appealed to the ancient Greeks who were newly emancipated from the conventional stylizations of earlier art. Zeuxis, for example, reportedly painted such realistic grapes that birds tried to eat them. The technique was also popular with Roman muralists. Although trompe l’oeil never achieved the status of a major artistic aim, from the early Renaissance on, European painters occasionally fostered illusionism by painting false frames out of which the contents of a still life or portrait appeared to spill, or by creating window-like images suggesting actual openings in the wall or ceiling. (Brittanica)
Value Structure
Is the lightness or darkness of a color or shade.  Chiaroscuro and tenebrism both employ the use quick shifts of light and dark.
Value refers to the lightness or darkness of a color. It is a variable that can substantially alter a color's appearance, and as we will see later, it is also an important factor in achieving legibility with type and color. A hue changes in value when either white or black are added to it. A color with added white is called a tint (fig.7) ; a color with added black is called a shade (fig.8). Generally speaking, pure hues that are normally light in value (yellow, orange, green) make the best tints, white pure hues that are normally dark in value (red, blue, violet) make the most desirable shades. The palettes colors below shoes a spectrum of tints and shades based on the hues from the colors clearly shows that changes in value greatly expand color possibilities.

Mantegna's Use of Perspective in Italy
According to this site (I'm not sure how accurate it is but it sure is a great idea), http://www.sindone.org/en/icono/mantegna.htm


The body of Christ is partially covered by the shroud, it lays on a reddish stone with light white veins. (the anointing rock). . .Although this rock is never mentioned in the gospels, it appears in  Costantinopolis as a passion relic in about 1170. The description which coincides with the painting of Mantegna was transmitted in reports made by pilgrims.  It was believed it came from Ephesus (Mary of Magdala took it there from Jerusalem) and the white veins were produced by the tears of Our Lady weeping next to the body of her dead son.
The boldness of the view makes the scene more dramatic; the vision from the top to the bottom and from the depth gives prominence to the nail open wounds which are no longer bleeding. The flesh beneath the torn skin is depicted by the precision of an anatomist.  On the left there are some characters: Mary is weeping, John is praying and Mary of Magdala perhaps is sorrowful. On the right there is a small flask of ointment and an opening towards a dark room: both signs of the imminent burial.


For all the videos in order with a textbook and study guides please visit:
http://art-and-art-history-academy.usefedora.com/
Posted by Kenney Mencher at 1:00 AM