Drawing from a Sculptural Fragment from Ancient Greece or Rome 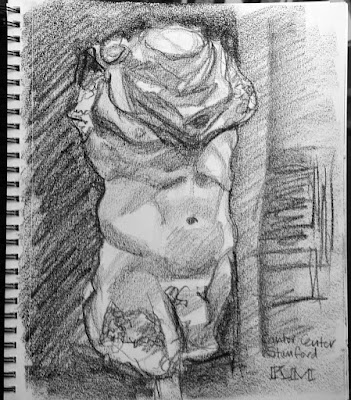 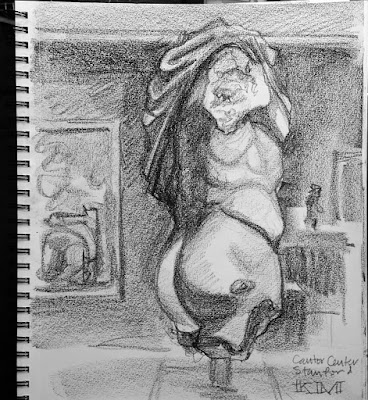 The last couple of years, I’ve been doing some studies of art historical artifacts that aren’t paintings and drawings. I found that in the way that I looked very closely at the paintings that I have studied, such as by the old Masters like Velasquez, I learned a lot by copying their work. So I decided to apply the same kind of thinking to some prehistoric art as well as other pieces that I really love such as ancient Greek art. So I filled up a couple of sketchbooks with things that I was looking at and I thought that I would share them here.

I suppose that the sculpture probably represents either Dionysus or the Doryphoros, or some other Greek or Roman God. The cloak around its neck probably means it's a God but I have seen some sculptures of just generic idealize figures that also have the same kind of cloak.

Check out the original sculpture here:

Here's a little bit about me, Kenney Mencher, the artist.

Originally from New York, NY, Kenney Mencher earned a BA and MA in Art History from City University of New York and University of California, Davis, respectively, following which he went on to obtain a MFA in painting from the University of Cincinnati in Ohio. He has taught at a number of institutions including the University of Chicago and Texas A&M University, and now teaches at Ohlone College in Fremont, California.

I have an extensive national exhibition record that includes solo and group shows. My work has been featured in newspapers, as well as the "Artist Magazine." It has also been published as cover art for four paperback noir novels and on the cover of the Laredo Philharmonic playbill, Lullaby Hearse Magazine, and the Oregon Literary Review. I maintain strong relationships with a large group of collectors in several states.

To learn more about me please visit my website at:
http://www.kenney-mencher.com/
Posted by Kenney Mencher at 3:38 PM