Women's roles during the Renaissance

For a full online text and a complete set of videos for $20 please visit:http://art-and-art-history-academy.usefedora.com/
"Man is the measure?"
Women's roles during the Renaissance 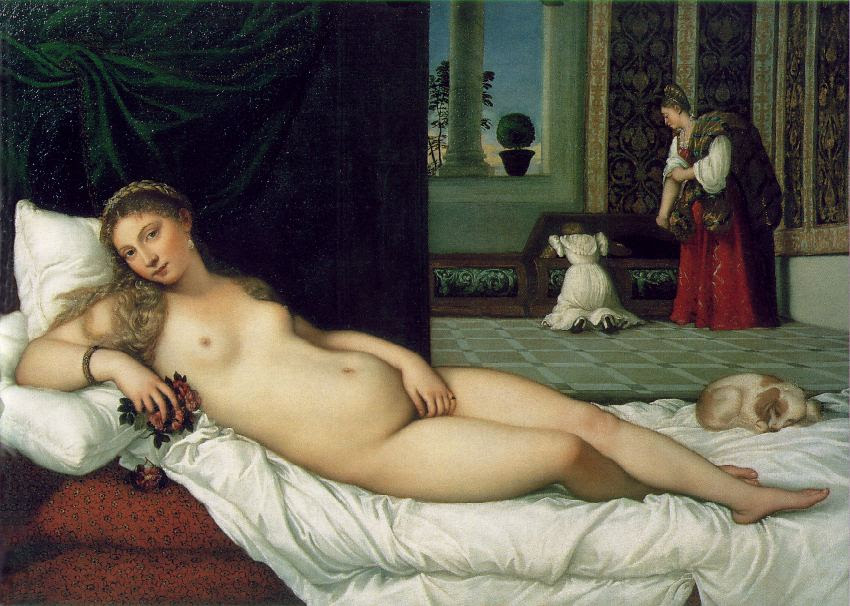 TIZIANO Vecellio (Titian) The Venus of Urbino 1538 Oil on canvas, 119 x 165 cm
Galleria degli Uffizi, Florence, Italian Renaissance
In the background of Titian’s painting entitled "The Venus of Urbino" (1538) are two women looking inside or placing things inside a chest. This chest or cassone is most likely a dowry chest, in which case the women are then preparing the chest with gifts for the upcoming nuptials. Venus, the goddess of beauty, nude in the foreground, presides over the event, but there’s something wrong with this picture. Venus is really the Duke of Urbino’s courtesan (mistress) and the title of the painting is just a disguise to make a nearly pornographic portrait palatable. This kind of double meaning in a painting is common during the Renaissance especially in portrayals of women.
What is also interesting about this images is that the artist chose to juxtapose the eroticized female form with commodities or luxury items.  By playing the textures and body of the female against expensive fabrics, fur, fruit, and dowery chest containing the family jewels and porcelain, the artist is also making the human female form another commodity which can be bought and sold.  In this way, the wealth of the patron is also eroticized.  This device is played off again and again throughout the history of art.
The cassone is a familiar object in the upper class Renaissance home. Provided by the bride’s family and kept throughout her life the chest is symbol of her marriage. The decorations on the chest are designed to educate the woman who owns it. The images that adorn cassoni relate familiar classical and biblical narratives concerning the lives of great women. For example, San Francisco’s "Legion of Honor" has a panel from a cassone by Jacopo del Sellaio that depicts the "Legend of Brutus and Portia," circa 1485. Both Plutarch (AD 46-119), a Greek historian, and Shakespeare (1554-1616) in his play "Julius Caesar," depict Portia as a strong and loyal wife. In Shakespeare’s "Julius Caesar," Portia exclaims, "Think you I am no stronger than my sex, Being so fathered and so husbanded?" (Act 2, i, 319-320) and stabs herself in the leg to prove to Brutus that she can bear any discomfort for him. After she learns of Brutus’ defeat, she kills herself by swallowing hot coals. Another cassone from the Louvre depicts the Old Testament story of Queen Esther and her self-sacrificing patriotic acts that saved the Jewish people. The subtext of these tales is not just loyalty but self-sacrificing loyalty in the face of adversity.
Titian's painting has been the subject of much observation.  It's interesting that so much positive "press" has been associated with this image considering how much it has been vilified in the past.  Mark Twain, in his biography Tramp Abroad, recorded his response to his encounter with the Titian painting: