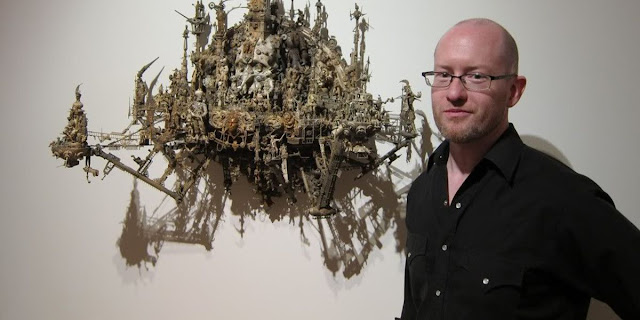 Recently I was introduced to artist Kris Kuksi by gallerist William Wilson (Grande Theatre for the Arts in Tracy, CA).

The first thing I said to William is, “He’s better than me damn him!”  and he is. 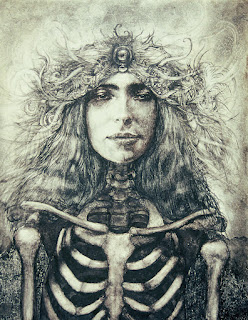 Although known for his assemblage primarily, at least right now, Kuksi can draw his ass off.  So the reason why I mention this is that to me the essence of visualization and craft is in 2D planning and drawing.  For me it validates his work even beyond the meticulous craft of his assemblages.  His drawings show a knowledge of anatomy, proportion, and an understanding of rendering light and shadow.

His paintings do too and surprisingly enough most of the work I’ve looked at is in acrylic but the handling and knowledge of color made me guess it was oil. 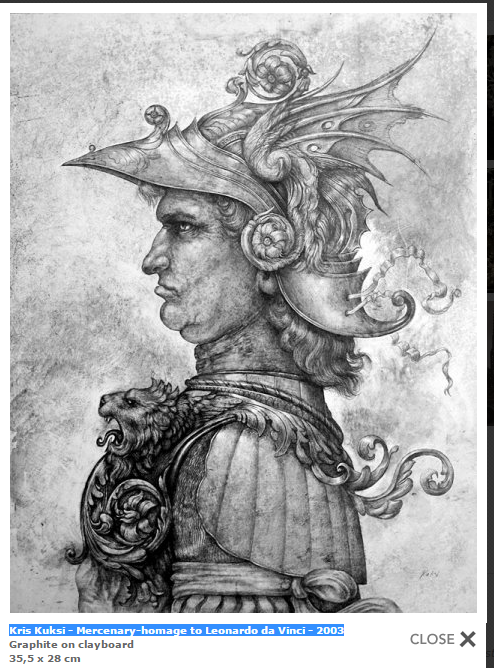 One of the thing that drew me to his art is the fact that there are clear cut references to art historical sources.  In a way, he is not the “low brow” artist he appears to be because he has a clear insight into “high culture.”  For example, his homage to Leonardo.  His re rendering of Leonardo’s work also references Leonardo’s deft touch. 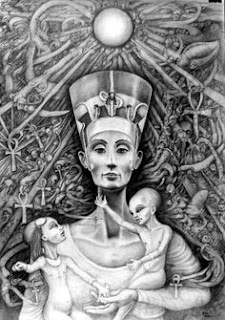 His appropriation of Akhenaton’s Egypt is insightful in an art historical way.  The reign of Akhenaton, and Akhenaton’s religious heretical reforms are evidenced in this drawing. Akhenaton was a heretic because he did away with the traditional religion, based on rebirth in the afterlife and replaced it with the “Cult of Aton,” a religion which literally worshipped the sun (Aton.) and his

This drawing references the famous sculpture found at Amarna of Nefertiti (Akhenaton’s Queen).  Kuksi assembles the iconography of Aton and shows a knowledge of some of the sunken relief sculptures that represent the family of Akhenaton.  These scenes of everyday life were unknown until Akhenaton’s reign and pretty much disappeared right after his grandson Tut died. 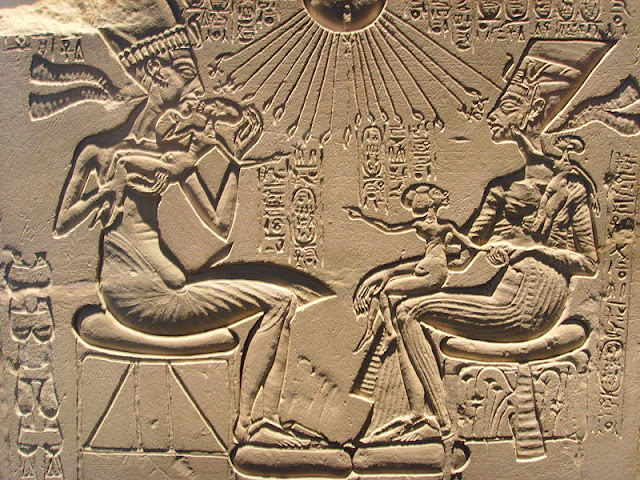 More obvious and less clear are his references to the work of reformation German printmaking and the art Bosch, and Brueghel. 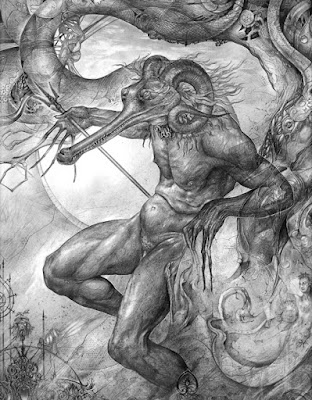 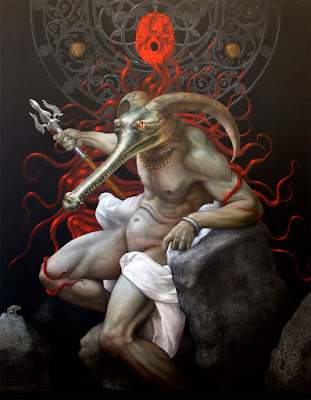 "Lucifer Before The Entrance To Hades" 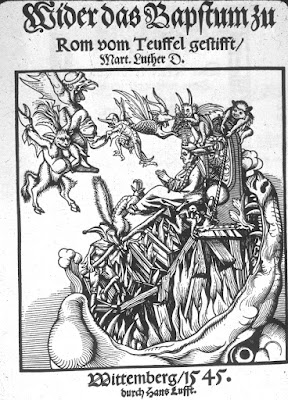 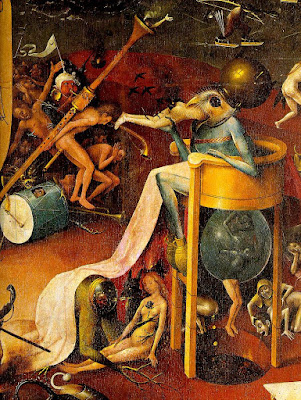 He even has a knowledge of Gothic Architecture and updates it in a delicious combination of WW2 Panther tanks and Gothic Cathedrals.  These might be his most popular and populist works. 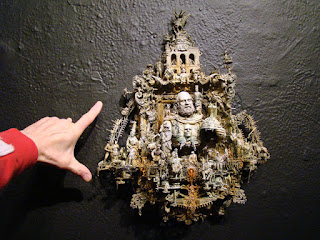 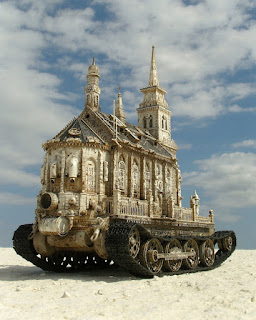 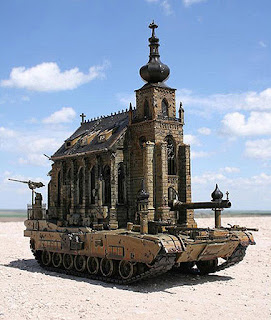 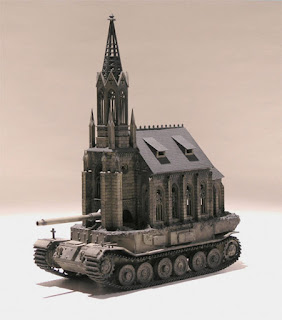 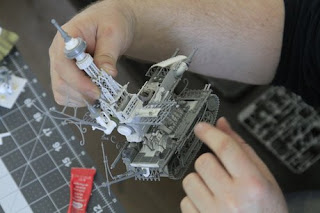 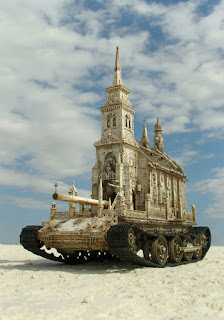 He is clearly in our time and able to make an almost antiquarian reference to antique imagery in his reference to the “Hunger Games.” 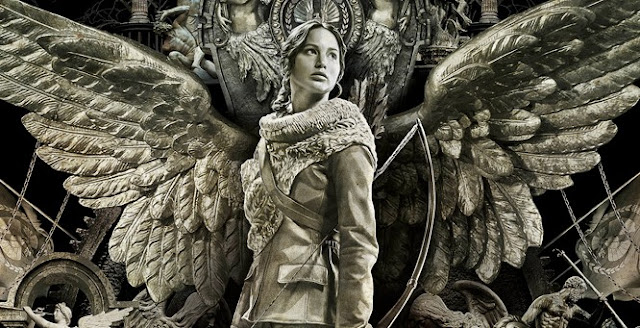 William Wilson also told me a story about how the producers and creative types who were developing “Black Sails” visited one of Kuksi’s shows and appropriated his imagery for their own purposes although not really as good.  Wilson explained that people often attribute the “Black Sails” imagery to Kuksi but it was kind of stolen from him, I guess in the same way that Kuksi “steals” from Art Historical sources.

While the detailed alabaster and bronze sculptures, including pirates, ships, skeletons, horses, and a massive octopus, that populate the Black Sails titles convincingly appear as though they are indeed hand-carved works of art, it is all computer-generated imagery, of course, produced in about three months. "We worked with an illustrator, and we composed each shot, and then we created those in CG and textured them so that they felt like physical objects," Dougherty explains, noting of the characters, "We really labored to get their expressions just right so when you saw them in that frozen moment you felt this emotional connection to them.


http://www.fastcocreate.com/3025252/how-the-main-titles-for-michael-bays-black-sails-became-a-work-of-art
Posted by Kenney Mencher at 10:20 AM