Form:  This book is tiny!   At 8" by 5" the artist had a very small area to work with in rendering his subjects, yet each image is extremely detailed and realistic.  The figures clothing, postures, and environments such as landscapes and homes were extremely carefully and accurately rendered.  Nevertheless, the artists who painted these did not bother with the strict conventions of linear perspective that we see in Italian art from the same period.
The space is constructed using a combination of intuitive perspective, some linear and vertical perspective.  Atmospheric perspective is out of the question. 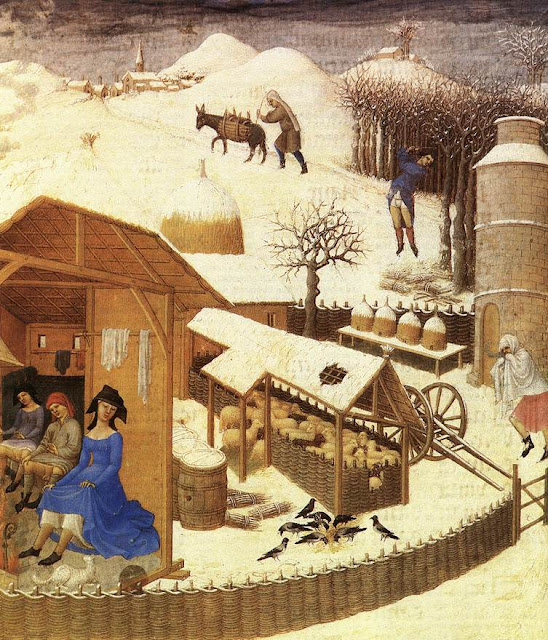 Iconography:  The depiction of genre scenes, the depiction of everyday life and everyday events,  is a convention that really begins with Giotto's and Assisi's humanism.  If one sees the face of God in every event and every interactaction, well then one might behave.  The realer it looks, the more we can personally realte to it and the more pursuasive it might be.  God is then in the everyday details.  However, the lack of linear and atmospheric perspectives of these images is iconic or at the very least somewhat symbolic of a very Northern idea, that "God is in the details" in another way as well. 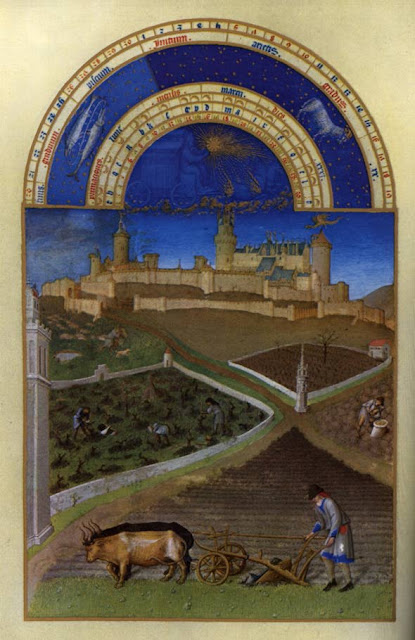 For the Limbourg brothers, the idea that images should be didactic first is a prime concern.  Even though the images are very real looking and therefore we can relate to them because the realism is so pursuasive and the clothing so accurate it was more imortant that the ideas were clear.  Sometimes realism was sacrificed for clarity.

devotional book widely popular in the later Middle Ages. The book of hours began to appear in the 13th century, containing prayers to be said at the canonical hours in honour of the Virgin Mary. The growing demand for smaller such books for family and individual use created a prayerbook style enormously popular among the wealthy. The demand for the books was crucial to the development of Gothic illumination. These lavishly decorated texts, of small dimensions, varied in content according to their patrons' desires.
One of the most splendid examples, the Trés Riches Heures of the Duc de Berry, was created in northern France and the Low Countries during the 14th and 15th centuries. Now held in Chantilly at the Musée Condé, it is an excellent pictorial record of the duke's spectacular residences, with magnificent calendar pages illuminated by the Pol de Limbourg and his brothers (c. 1414-18), as well as many biblical scenes and illustrations of the lives of the saints. 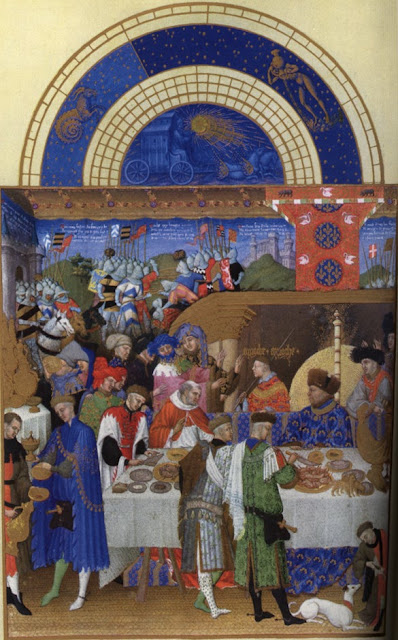 Most likely, the use of the book of hours and specifically this one is based on this Bible passage from Ecclesiastes.  The passage and the pages might share the following.  In almost all of the images from this manuscript there are images of work in the foreground of the image.  In the background are images of castles and churches.  It might be possible to conclude, at the risk of reading too much into things, that the kingdom of heaven awaits after all the hard work of living a righteous life is done.

1
There is an appointed time for everything, and a time for every affair under the heavens.
2
A time to be born, and a time to die; a time to plant, and a time to uproot the plant.
3
A time to kill, and a time to heal; a time to tear down, and a time to build.
4
A time to weep, and a time to laugh; a time to mourn, and a time to dance.
5
A time to scatter stones, and a time to gather them; a time to embrace, and a time to be far from embraces.
6
A time to seek, and a time to lose; a time to keep, and a time to cast away.
7
A time to rend, and a time to sew; a time to be silent, and a time to speak.
8
A time to love, and a time to hate; a time of war, and a time of peace.
9
What advantage has the worker from his toil?
10
I have considered the task which God has appointed for men to be busied about.
11
He has made everything appropriate to its time, and has put the timeless into their hearts, without men's ever discovering, from beginning to end, the work which God has done.
12
I recognized that there is nothing better than to be glad and to do well during life.
13
For every man, moreover, to eat and drink and enjoy the fruit of all his labor is a gift of God.
14
I recognized that whatever God does will endure forever; there is no adding to it, or taking from it. Thus has God done that he may be revered.
15
1 What now is has already been; what is to be, already is; and God restores what would otherwise be displaced.
16
And still under the sun in the judgment place I saw wickedness, and in the seat of justice, iniquity.
17
And I said to myself, both the just and the wicked God will judge, since there is a time for every affair and on every work a judgment.
18
I said to myself: As for the children of men, it is God's way of testing them and of showing that they are in themselves like beasts.
19
For the lot of man and of beast is one lot; the one dies as well as the other. Both have the same life-breath, and man has no advantage over the beast; but all is vanity.
20
Both go to the same place; both were made from the dust, and to the dust they both return.
21
Who knows if the life-breath of the children of men goes upward and the life-breath of beasts goes earthward?
22
And I saw that there is nothing better for a man than to rejoice in his work; for this is his lot. Who will let him see what is to come after him?

If you count your time on earth and keep track of the days and seasons, well then there is still a possibilty of making it into heaven.  The book of hours and its tracking of the heavenly bodies and the seasons also refers to Aquinas ideas having to do with the harmony of the universe.

Limburg also spelled LIMBOURG (all b. after 1385, Nijmegen, Brabant [now in The Netherlands]--d. by 1416), three Flemish brothers who were the most famous of all late Gothic illuminators. They synthesized the achievements of contemporary illuminators into a style characterized by subtlety of line, painstaking technique, and minute rendering of detail. The sons of a sculptor, Arnold van Limburg, they were also the nephews of Jean Malouel, court painter to the Duke of Burgundy, and are sometimes known by the name "Malouel." The brothers worked together, and although the most celebrated appears to have been the eldest brother, Pol, it is difficult to distinguish their individual styles.

About 1400 the brothers were apprenticed to a goldsmith in Paris, and between 1402 and 1404 Pol and Jehanequin were working for the Duke of Burgundy in Paris, possibly on the illustration of a Bible moralisée now in the Bibliothèque Nationale, Paris. Some time after Burgundy's death in 1404, they entered the service of his brother, the Duke de Berry, and it was for him that their most lavishly illustrated books of hours (the popular form of private prayer book of the period) were produced. The Belles Heures (or Les Heures d'Ailly; now in The Cloisters, New York) show the influence of the Italianate elements of the contemporary French artist Jacquemart de Hesdin's illuminations. The Très Riches Heures du duc de Berry (Musée Condé, Chantilly, Fr.), considered their greatest work, is one of the landmarks of the art of book illumination and ranks among the supreme examples of the International Gothic style. It is essentially a court style, elegant and sophisticated, combining naturalism of detail with overall decorative effect. An awareness of the most progressive international currents of the time, particularly those deriving from Italy, suggests that at least one of the brothers visited there. The Très Riches Heures was left unfinished in 1416 but was completed about 1485 by Jean Colombe.

The Limburg brothers were among the first to render specific landscape scenes with accuracy. Their art did much to determine the course that Early Netherlandish art was to take during the 15th century.

For videos, a textbook, and study guides please visit:
http://art-and-art-history-academy.usefedora.com/
Posted by Kenney Mencher at 6:00 AM