A monument documenting the shift in conception of Imperial power is represented by the Triumphal Arch built by the Senate to commemorate Constantine's defeat of his rival Maxentius at the Battle of the Milvian Bridge in 312 A.D. It is hard to underestimate the importance of Constantine in the narrative of Medieval art. His patronage and ultimate conversion to Christianity were pivotal in the transformation of Christianity as a religion on the margins to Christianity as integral to imperial power. An important theme we will be developing in the first part of this course is the Christianization of Rome and the Romanization of Christianity. It is interesting to note that on the Arch that was constructed adajacent to the Colosseum, near the formal center of old Rome, there are no references to Christianity. There is not even a reference to the famous vision of the monogram of Christ that Constantine was believed to have seen before the Battle of the Milvian Bridge. It is important to see how this monument justifies Constantine's power by linking him to the Roman Imperial past. In its form as a Triumphal Arch it links Constantine to the tradition of this form going back to monuments like the Arch of Titus constructed after 81 A.D.http://employees.oneonta.edu/farberas/arth/arth212/late_antiquity_imp_image.html


Notice how Constantine has the same ad locutio gesture we observed in the comparison of the Augustus of Primaporta and the Colossus of Barletta. In the language of Roman Imperial art, this gesture clearly identifies the active subject of the image. The ritualized nature of the gesture also associates the bearer of the gesture to the tradition of Roman Imperial power. This connection to past power that we have already noted in the plan of the arch as a whole is further reitterated in specific details of this relief. It has been noted that the two seated figures at either end of the rostrum are representations of sculptural portraits of Hadrian and Marcus Aurelius. The three highest figures in the relief are, thus, Constantine (had his head survived) and the two second century predecessors. The five columns behind the rostrum make a reference to the link between Constantine and his immediate predecessor Diocletian. In 303 A.D. a monument commemorating the tenth year of Diocletian's rule was constructed at the rostrum. The monument was composed of five columns with the central one topped by an image of Jupiter, flanked by others topped by images of the four Tetrarchs. This relief thus places Constantine at the center of Rome both physically and historically.http://employees.oneonta.edu/farberas/arth/arth212/late_antiquity_imp_image.html

Context:  These medallions are probably sculptures that were transplanted from a monument created in the first century AD.

1
"I am the true vine, and my Father is the vine grower.
2
He takes away every branch in me that does not bear fruit, and everyone that does he prunes so that it bears more fruit.
3
You are already pruned because of the word that I spoke to you.
4
Remain in me, as I remain in you. Just as a branch cannot bear fruit on its own unless it remains on the vine, so neither can you unless you remain in me.
5
I am the vine, you are the branches. Whoever remains in me and I in him will bear much fruit, because without me you can do nothing.
6
Anyone who does not remain in me will be thrown out like a branch and wither; people will gather them and throw them into a fire and they will be burned.

Go here for a Catholic Sermon on the iconography of vines: http://www.abideinchrist.com/messages/jn15v1.html


Since Jews and Christians share in many of the ideas expressed in the Old Testament, one of the concepts they share is the second commandment which forbids the creation of graven images.  Early Jews and Christians took this commandment quite literally and did not create any such sculptures or images.  The rational was that image making could lead to idolatry.  Some Jewish groups and Christians felt that the word graven indicated a ban on sculptural images but both graphic ones.  Christians were split over this decision but came on a comprise in which images were useful because they instructed. This controversy is called the iconoclastic controversy (see Stokstad "Iconoclasm" page 309).  This may account for the deliberate stylizations and lack of naturalism of the figures that is similar to the relief sculptures on the Arch of Constantine.


One of the main products or art forms the monks produced was the illuminated manuscript.

Out of the Depths... 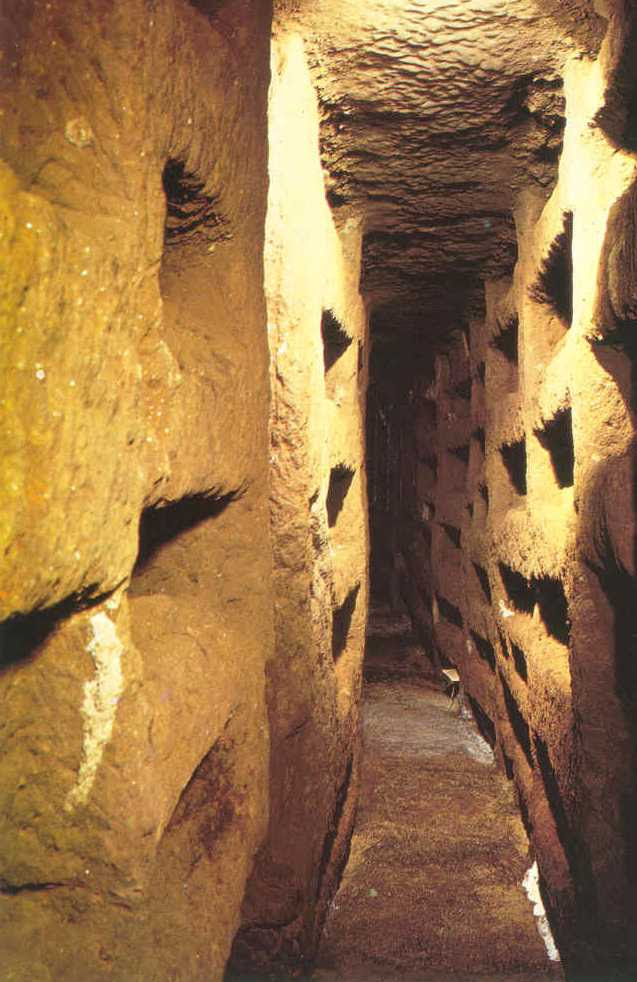 A typical gallery, this one in St. Callixtus;
showing the burial niches or loculi. 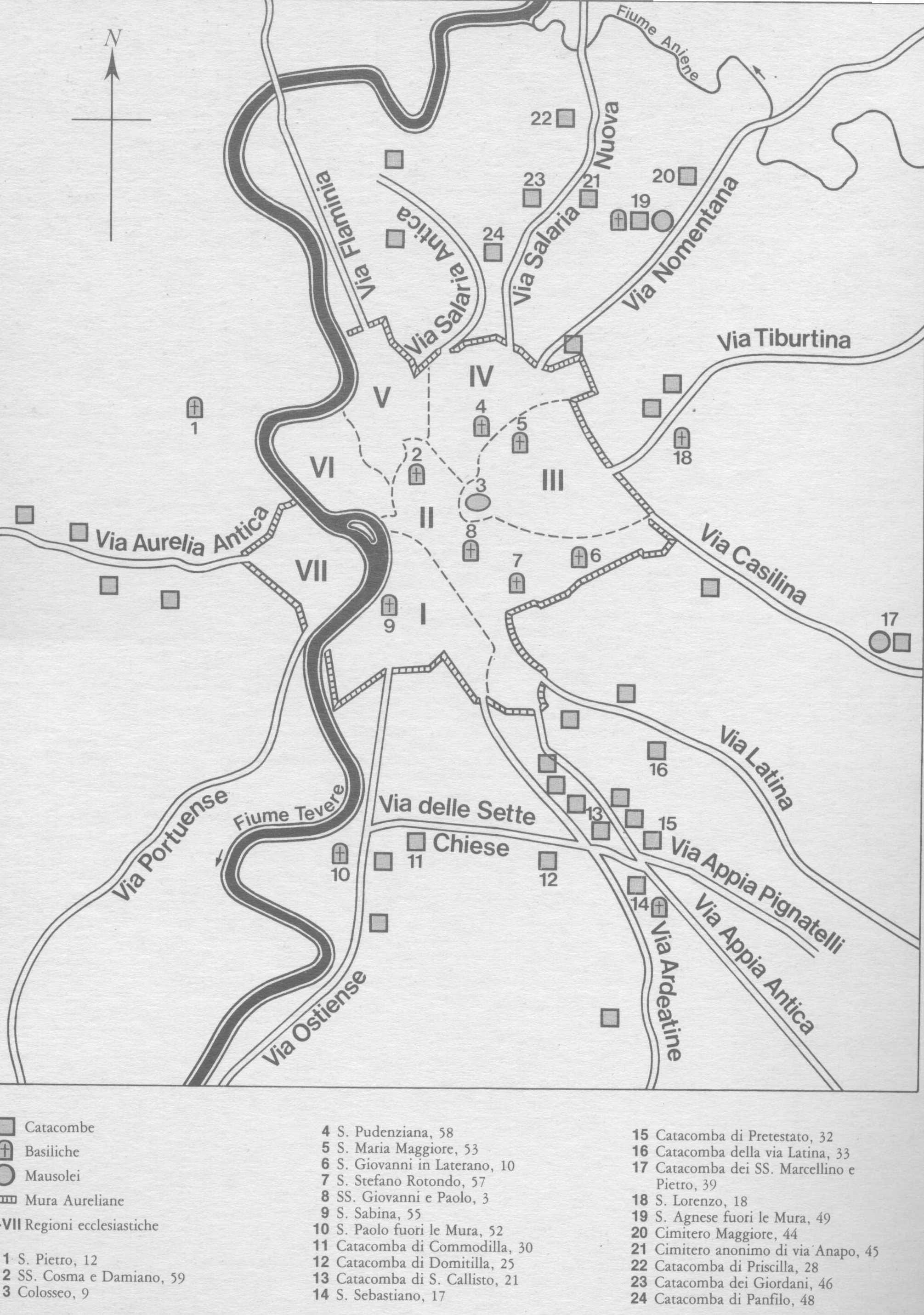 HISTORY OF THE CATACOMBS 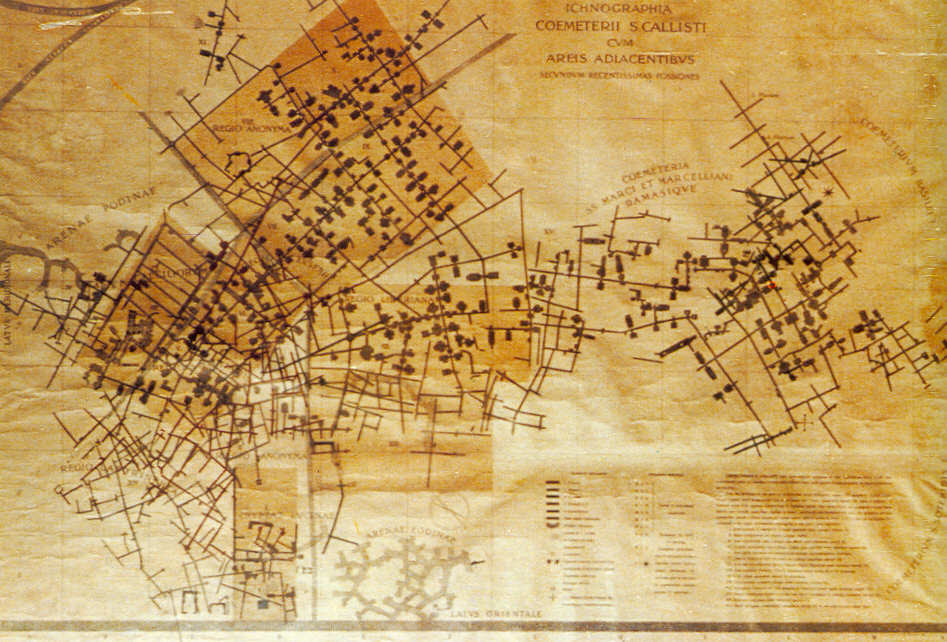 Time Line
Ancient Greece 100 B.C.
Golden Age of Pericles- 500 B.C.
High Hellenistic Period- 350 B.C.- 100 B.C.
Beginning of Pagan Roman Empire- 200 B.C.
Roman Empire- 200 B.C.- 315 A.D.
Early Christian Era- 315 A.D. - 800 A.D.
Context: Notes on Judaism (the Jewish Religion)
Judaism is similar to Islam in that the Jewish people are not a race but a people who share a religion and a culture.  Judaism began around the time that Egypt and Mesopotamia were rising in power.  It begins with a single patriarch named Abraham, who in some ways has a very similar story to the Islamic Mohammed.  According  to the Old Testament, the Jewish Bible called the Torah, Abraham was instructed directly by god to found a monotheist faith and nation, which would eventually become the nation of Israel (Gen. ch. 2). From Isaac, the son of Abraham, came fourth the nation of Israel (Gen. ch.21). However, Abraham also had a son with one of his servants (Gen. ch. 16). This son, Ishmael, became the father of the Arabs. Mohammed, one of his descendants, founded Islam. The Jews, like many other nations and groups, were conquered by the Roman Empire. The Jews were conquered because of the tremendous force and power of the Romans but although the Jews offered cultural resistance to the hegemonic powers of the Roman Empire often they adapted and adopted some of the values of the peoples with whom they lived.  Judaism and Islam also both share in many of the same laws, philosophies and even dietary restrictions.  The most relevant to art is that Judaism's Second Commandment forbids the creation of graven images.

The injunction against image making continued during the late 2nd Temple period to exercise a significant degree of influence on the cultural preferences of the Israelites. In fact the Greek and the Roman conquests periods that parallel the late 2nd Temple Period were pierced through by a series of high profile clashes over the use of figurative images in religious and semi-religious contexts. Such theological clashes were also often the cause or pretext for political confrontations, insurgencies or outright revolts.As of the second to third century C.E. onwards there was against all expectations, a noticeable shift/relaxation in the application of the 2nd commandment. A distinction was drawn up between images in the context of decoration and images in the context of adoration or ritual, and a greater acceptance of figurative images in a decorative context made itself felt. The change in attitude may have been partly connected to the disappearance of Israel as a physical entity. It led to a flowering of mosaic art in the synagogues of the third to the sixth centuries C.E., and in instances such as Dura Europos Synagogue and possibly others, to the introduction of images into worship itself.
quoted from:http://bible.ort.org/bible/htm/atlas/Artefacts/jew_art.htm

Posted by Kenney Mencher at 7:26 PM