At Home with Themselves: Sage Sohier’s Moving Portraits of Same-Sex Couples in the 1980s

by Maria Popova
A tender, thoughtful lens on life and love in the margins. 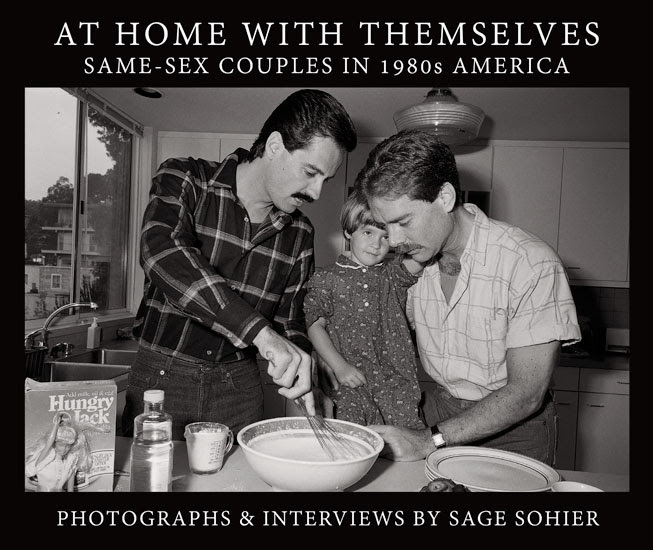 By the second half of the twentieth century, same-sex love had undergone a tumultuous journey — in the middle ages, widely held male bonding ceremonies condoned the same love that would become punishable by death just a couple of centuries later; and yet in the 19th century, America’s first gay bar appeared, while women engaged in “romantic friendships” and even married each other, all within society’s transparent closet; but by the early twentieth century, the closet had become increasingly opaque — even luminaries like Virginia Woolf, Oscar Wilde, and Margaret Mead celebrated their same-sex love only in private and queer couples lived in secret; those who dared not to conceal their lives were persecuted and punished — public tragedies like the fate of computing pioneer Alan Turing were only the tip of a chilling iceberg of injustice.
And yet love being love, perhaps the most remarkably resilient phenomenon the human heart will ever know, it persevered. The 1970s brought the first pride parades and a new era of civil rights for the LGBT community commenced.
The mid-1980s were a time of particular upheaval for the plight of same-sex families — a time when kids were writing Judy Blume endearing and exasperated letters about being gay, a time when the world saw its first children’s book about a two-mom family, a time when today’s inclusive ideas about what makes a family, not to mention the prospect of marriage equality in the eyes of the law, seemed like a radical proposition yet defined the daily reality of those courageous queer families who withstood the bigotry of the mainstream and lived their lives, at once extraordinary and extraordinarily ordinary, with dignity and grace. 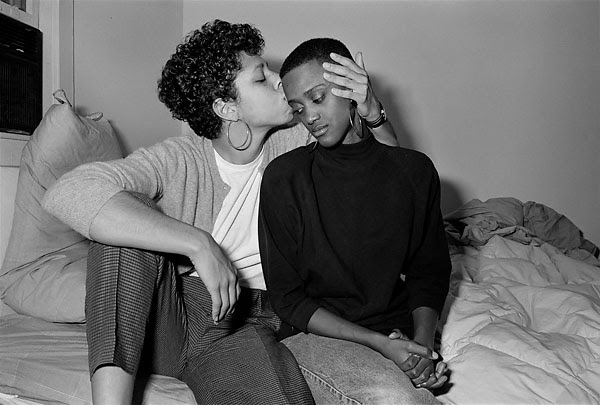 It was at this peculiar point in history that photographer Sage Sohier began her tenderly thoughtful project At Home with Themselves: Same-Sex Couples in 1980s America — a series of intimate photographs and interviews, documenting the simple human truths behind the cultural complexities of queer love. 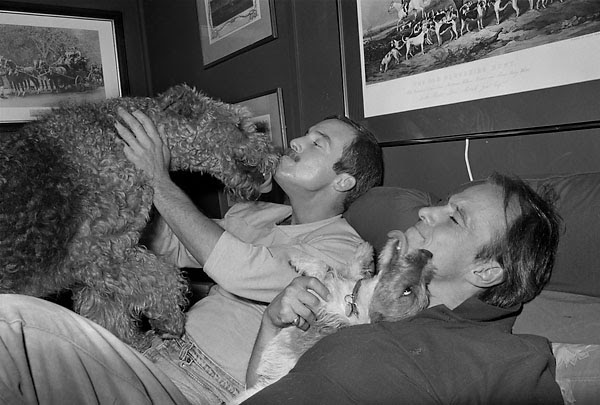 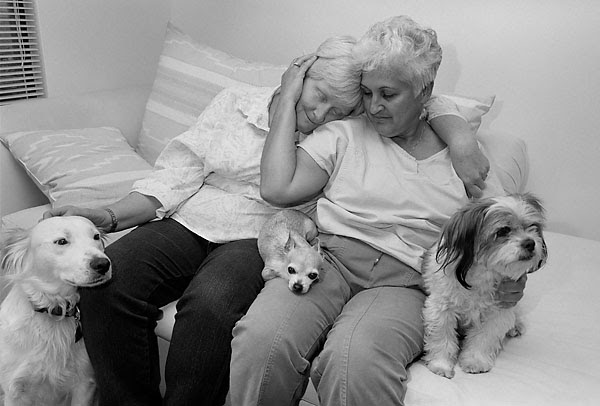 The project sprang from a deeply personal place — a few years earlier, Sohier had found herself at once startled and unsurprised to learn that her father was gay. Her cousin had spotted him dancing with a young man in a New York City nightclub and the incident instantly made him make sense — Sohier parents had divorced when she and her sister were still toddlers, and despite being a handsome and eligible bachelor, her father had never remarried. Sohier writes in the introduction:


My sister and I began reinterpreting history and realized that somewhere in our teens the beautiful young women he brought out to dine with us were replaced by beautiful young men, each one introduced as “a colleague from my law office.” 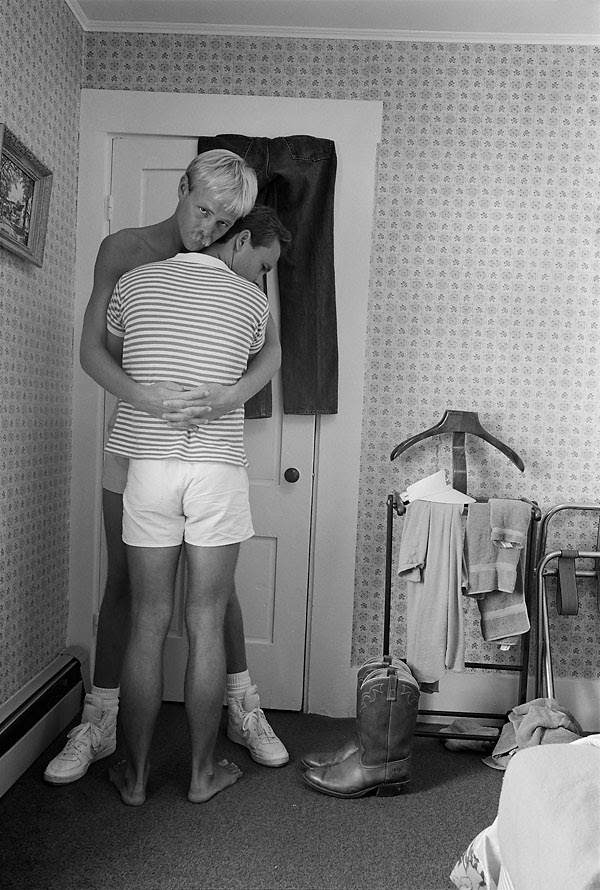 But despite the discovery, Sohier’s father didn’t come out to her and “it became increasingly clear that he didn’t intend to” — the wall between father and daughter may have suddenly become transparent, but it was still a wall and still a source of anguishing separation. The project became Sohier’s way of knowing her father, of offering him the implicit acceptance for which he was too timid or terrified to ask. She writes:


Some years later, a means of tackling this subject with some degree of indirection presented itself. In the spring of 1988, I was just finishing my same-sex couples project. It had taken me almost halfway into the project to realize that I had been inspired to a great extent by my lifelong curiosity about my father and more recent curiosity about his lifestyle. I was in New York showing the work to galleries and museums, and decided to call and see if my father was in town. He invited me over for lunch the next day; I had my portfolio with me, but figured I would never get up the nerve to show it to him. His partner, Lee, answered the door when I rang…. Lee made sandwiches for us while I chatted with my father. I mentioned my project and, after some urging from Lee, showed them my photographs. My father appeared to be interested, amused, and touched. As we kissed goodbye later, his eyes teared up. His emotion and relief at my coming out for him was palpable.

This compassionate curiosity for her father’s lifestyle and inner life is what Sohier brings to the many couples she photographs in the project — a kind of quiet humility before their love and unconditional celebration of its many dimensions, from the romantic to the sexual to the domestic. 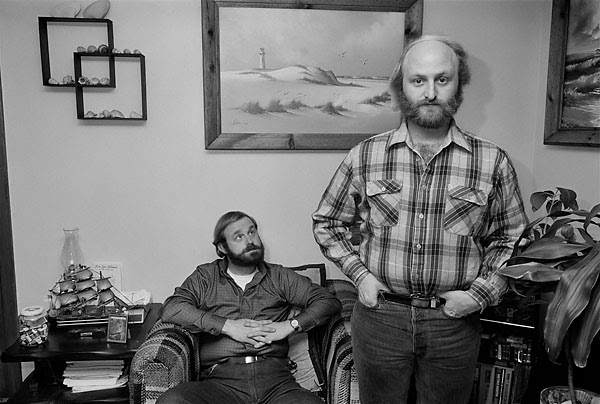 DANA: I didn’t want to grow old and grab somebody out of desperation. I wanted to grow old with somebody. 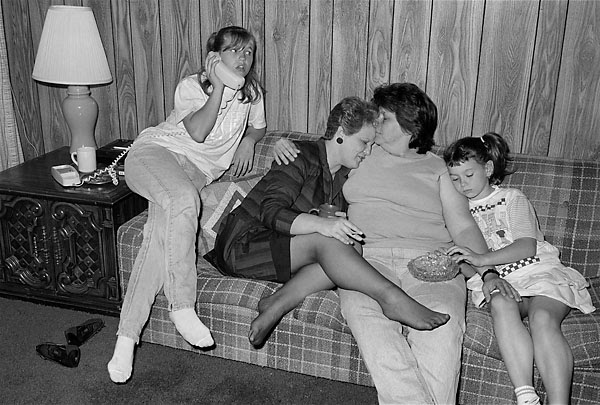 DIANE: If I put on a dress I feel like a drag queen. There’s nothing feminine about me. I’ve given birth 8 times, I’m a good mother, I love my children dearly — I don’t want to be their father, I am their mother — but dresses aren’t my thing you know; make-up’s not my thing, even when I was married to my husband. 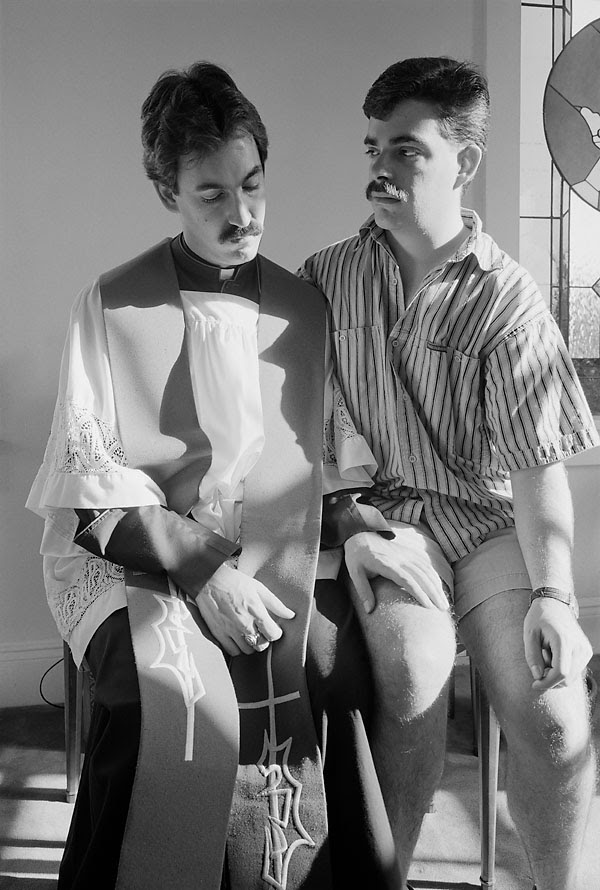 TOM: When I met Steve, I was very rebellious with the church, and it fascinated me that Steven was gay and involved with the church at the same time. I had a very fundamentalist background, so it was very hard for me to come out ’cause I had all these religious friends who told me I was going to hell. [I went to a] Bible college, so I didn’t have a pretty time at first. I was running around with friends that drank and took drugs, and Steven rarely drank, wasn’t into drugs, so that fascinated me. And he was very sweet and gentle.

What makes the project so wonderfully disorienting is that it reminds us, ever so subtly, that we are always a product of our era’s normative biases — cultural, social, political, even technological. It is hard to imagine today, in our age of selfies and the general compulsion to share every sliver of the self on social media, just how much courage it must have taken for these couples to face the camera with their most intimate, private, vulnerable selves as same-sex couples. And yet the act of doing so channels the simple, profound sentiment Andrew Sullivan would come to write in his pioneering essay on the subject a few years later: “Silence, if it does not equal death, equals the living equivalent.”
To see and be seen, I continue to believe, are the greatest gifts we can give one another. Sohier’s project is a masterwork of generosity. Her choice of black-and-white film also adds an element of timelessness, as if to remind us that love, whatever its permutations, has always been the single most immutable presence in the human journey. Flowing from Sohier’s lens are what Isaac Asimov called “the soft bonds of love” — the same invisible threads of belonging that pulled our cave-dwelling ancestors toward one another and continue to bind every couple who ever lived. 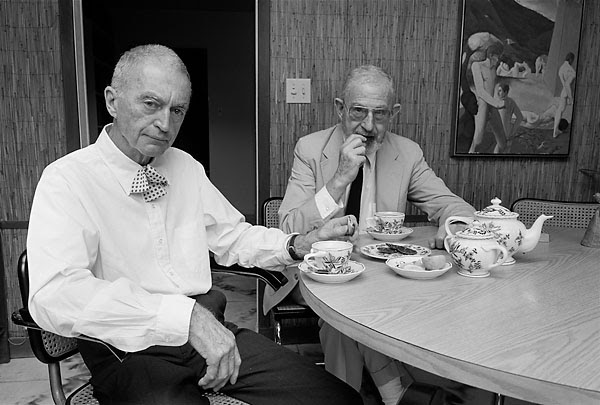 Sohier reflects on the pioneering bravery of her subjects:


[In some photographs] there’s a tentativeness, in others a kind of not-to-be-taken-for-granted raw tenderness. People in my father’s generation had grown up feeling that being openly gay was just not an acceptable option. In my generation that began to change, and I was grateful to be witness to it.
It’s a wonderful step forward for the civil rights of this country and our collective humanity that same-sex relationships and marriages have become accepted and celebrated. It’s important, though, to recognize that these relationships have always existed, and, in many cases, thrived. They were often discreet, and many lived their lives in the margins. But the success of the same-sex marriage movement would not be possible without the efforts of all those couples who came before and who worked to achieve this goal. Their private love, and their persistence in going public with it, should never be forgotten.

Captivated by “the visual novelty yet total ordinariness of these same-sex relationships,” Sohier decided to complement the photographs with extensive interviews. Echoing Susan Sontag’s unforgettable insight into the “aesthetic consumerism” of photography — Sontag, appropriately, was busy subverting sexual stereotypes at that very moment — Sohier writes:


A photograph derives its strength from the singularity of its assertion, but people’s lives and beliefs are more complex than that.

At Home with Themselves is many layers of beautiful and thoughtful in its entirety. Complement it with The Invisibles, Sébastien Lifshitz’s spectacular portraits of same-sex couples in Europe in the early twentieth century, then revisit Edith Windsor, perhaps the single most important person in the modern marriage equality movement, on what equality really means.

Thanks, Wendy
Posted by Kenney Mencher at 10:40 AM