Write a story about "Oration" and Win the Watercolor Study

Round #2 of Renovated Reputations will culminate in three shows.


The story you write should be a "Flash Fiction" which is a complete story in one thousand or fewer words.

The story you write should be a "Flash Fiction" which is a complete story in one thousand or fewer words.  Please post the story in the comment section, you will have to provide your name and an email address in order to be qualified to win or you can e-mail me at kenney.mencher@gmail.com with your info.  There is a problem with how many characters can post (only about 4,000) so if you cannot post it.

E-mail it to me at kmencher@ohlone.edu

This is the second version of this show!

Round #2 of Renovated Reputations will culminate in a show at Ohlone College in Fremont, California at the Louie Meager Art Gallery in February 2012.
Stories will be published in a vintage style  newspaper catalog and the gallery will be converted into a 1930 or 40's cabaret set and students will be acting the stories out as monologues at some of the events at the college in the art gallery.

This came in by e-mail:


Despite the cold fog outside, the office was beginning to get uncomfortably hot.  Reporters were crammed in the room and spilling into the outer office.  Inside they were shoulder to shoulder, pens jotting on notepads.


The Mayor was sitting at his desk, leaning back in the leather chair, hands folded at his belly.  A cigar smoldered in an ash tray just at arms reach.  None of the reporters broke the plane formed by the front edge of his large oak desk and the room.


“The campaign was tough, real tough this year, boys,” The Mayor was saying. “But I’m confident I will come out ahead in the final tally.”


“How’d you manage it?” called a reporter from the side of the room.  He was leaning against the wall, smoking, and the only one without a notepad in sight.


“We worked a lot of long nights and rallied everywhere in the city, including those areas neglected by the other candidates.  I’d like to thank all my supporters for turning out and rallying for my cause, and would appreciate it if you would quote me on that.”


“You looked to be on the ropes there a bit, Mr. Mayor,” said another reporter.


“Yes, there was a point where things seemed to be going against us.  Nothing that a little hard work couldn’t turn around.”


“The Sailor’s Union only came around to you in the last week or so,” said a third reporter.  He was front and center, unshaven and missing a tie.


“Is there a question in that?” asked the Mayor, reaching for his cigar.


“How hard was it for you to win them from Councilman Lee?” continued the reporter.


The Mayor puffed his cigar.


“Councilman Lee never had their support in the first place.  You can’t lose what you never had.”


The Mayor held his hands up, being careful to keep the cigar away from his leg.


“There are more defining differences between Councilman Lee and me.  Look at my last 3 years as mayor.  When cities like Chicago are under siege from gang violence, our city has seen a consistent decrease in crime.  City services are more efficient, new construction is rising, and business is booming.”


“What will you do in your next four years?” asked the smoking reporter.  A few of the others rolled their eyes.


“I’ve got extensive plans to expand business to our ports.  We will be the place for business to ship to.  I don’t need to tell you the benefits of being the biggest hub for regional distribution.”


“And what of the reports by waterfront workers who said they were strong-armed by the American Legion,” said the unshaven reporter.


“Hold it right there,” said The Mayor.  “I, nor anyone on my staff, has ever used nefarious means in the course of our duties.”


“And the reports of scabs trucked in on city vehicles?”


“Ellis, I’m offended,” said The Mayor.  “You’ve worked the city beat for many years and are an icon of integrity.  But you know how many rivals I have and how they attempt to undercut my actions.  I can assure you my staff was not involved.”


“I never meant to accuse you of any impropriety, but surely you must be aware that there are those who would act unscrupulously in your favor.”


“Again, not by me, and not by anyone on my staff.  For your sake, Elllis, this line of discussion is over.”


“We’re going to press with the story of the City Manager meeting with the owner of the boarding houses used by the strikebreakers.  Any comment.”


“This line of questioning is no good, Ellis.  There are things out there bigger than you or me.”


“He met with Big John Torrio.  I know that prior to the meeting he withdrew a large sum from the city’s General Fund.”


All the reporters were quiet.  The Mayor looked grave.  The smoking reporter stood up and sauntered to the back of the crowd.


“Is that your statement?”


“No, Ellis, there was no impropriety.  I believe you’re mistaken.  I’m sure a reasonable explanation will be found for what you think you know.”


“We’re running with it in the morning.”


The Mayor sank in his seat a bit.  “I really wish you had been more reasonable, Ellis.”


Ellis took the stairs down to the lobby with the other reporters.  Some finished up their notes, and others went to the bank of phones to call in their stories.


“A lot of hot water in the morning,” mused a reporter.


“Dynamite, Frank.  I’ve been waiting a long time to blow the lid off the backroom of this administration.”


“And will you ever,” said another.  “Wanna let us know what that sum was?”


Ellis adjusted his coat and hat and exchanged goodbyes.  Several reporters patted him on the back on his way out.


He turned out front of City Hall and went up Market Street to catch the streetcar to the paper’s office.  He’d add a line or two regarding The Mayor’s non-comment and call it a night.  As he walked he mused over the best way to articulate the long pause in The Mayor’s response.


Two large men stepped out of the shadows of a building, blocking his path.  He was between two streetlights, and the men had hats pulled down low on their head.  The collars of their coats were turned up.

Posted by Kenney Mencher at 7:18 PM No comments:

Posted by Kenney Mencher at 9:29 PM No comments:

Some drafts of ads that I need opinions on

I have to put one of these ads in the Art Collector Magazine and I can't decide which one.  Opinions?
It's due at 5. 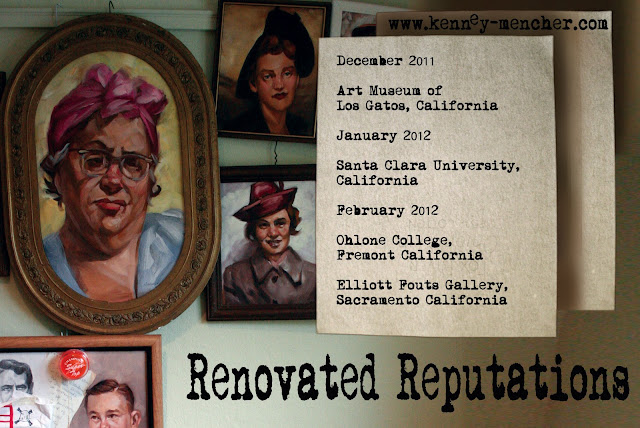 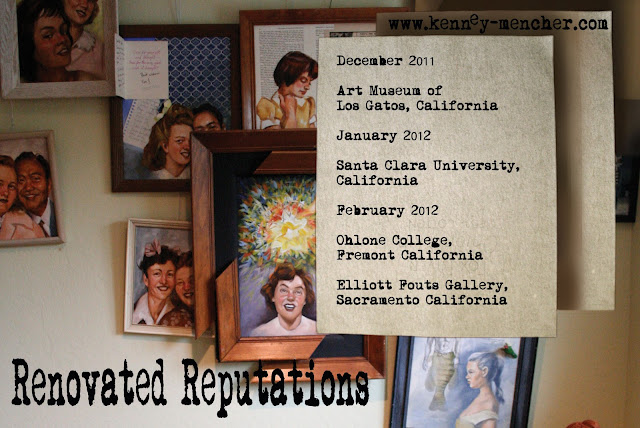 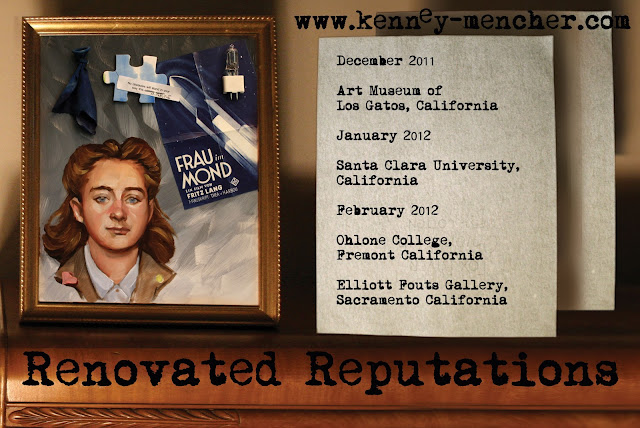 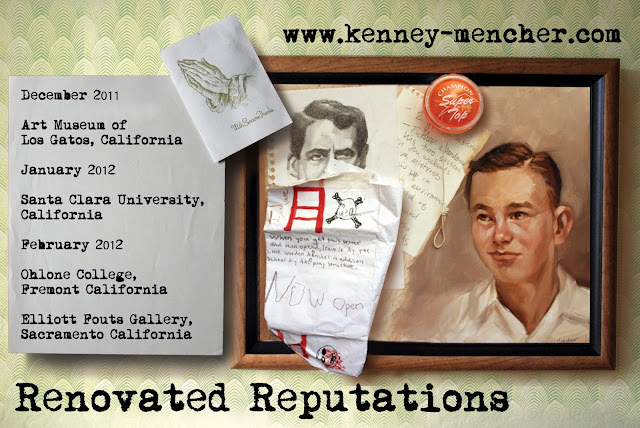 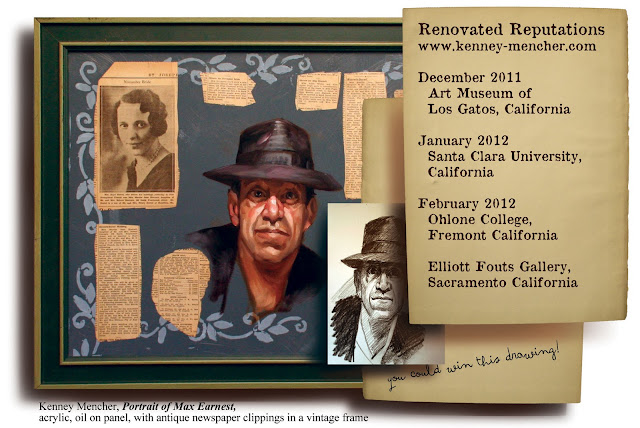 Posted by Kenney Mencher at 3:43 PM No comments: 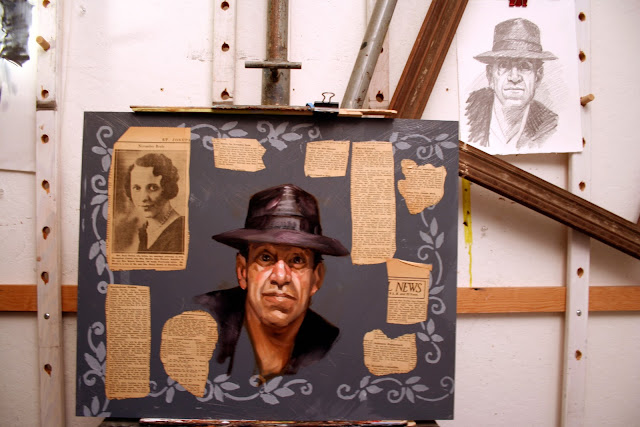 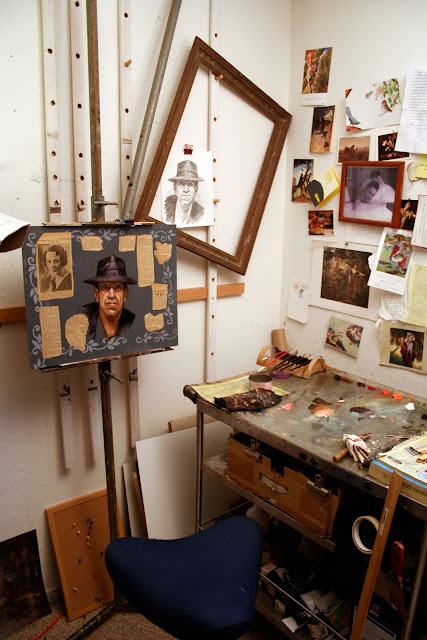 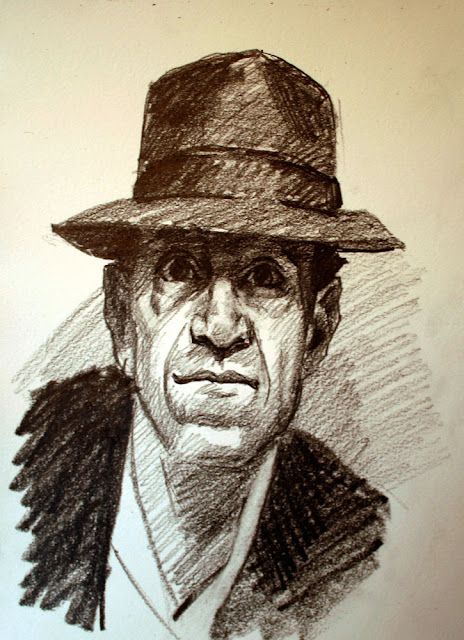 Posted by Kenney Mencher at 4:49 PM No comments: