Round #2 of Renovated Reputations will culminate in three shows.  One show will be in December 2011 at the Art Museum of Los Gatos in California.  Two others will be in February 2012 at Ohlone College in the Louie Meager Art Gallery in Fremont California and the Elliott Fouts Gallery in Sacramento California.

The story you write should be a "Flash Fiction" which is a complete story in one thousand or fewer words.


The story you write should be a "Flash Fiction" which is a complete story in one thousand or fewer words.  Please post the story in the comment section, you will have to provide your name and an email address in order to be qualified to win or you can e-mail me at kenney.mencher@gmail.com with your info.  There is a problem with how many characters can post (only about 4,000) so if you cannot post it.


E-mail it to me at kmencher@ohlone.edu


This is the second version of this show!
Round #2 of Renovated Reputations will culminate in a show at Ohlone College in Fremont, California at the Louie Meager Art Gallery in February 2012.
Stories will be published in a vintage style  newspaper catalog and the gallery will be converted into a 1930 or 40's cabaret set and students will be acting the stories out as monologues at some of the events at the college in the art gallery.

These came in by e-mail:


Les fantômes du sonore
by Elisa Bandy
When the pianist had met the woman who was to become his wife, it'd been clear to him that she'd been crying.  There was a handkerchief in her hand, well-worn and well-used, and her eyes were puffy and red as she thanked him for his performance of Tchaikovsky's most famous piano concerto.  It was impossible to resist her when she asked in a broken accent accompanied by gentle tones, “Could you play the cadenza for me, one more time?”  They'd waited until the lounge was cleared of its patrons, and the janitorial staff began its night's long haul.
Her slender hands were glued to her mouth while she listened with a fervour that he'd never seen in an audience before.  From her chair just beyond the edge of the stage, she wept in silence, in spite of the visible tremors that shook her entire body.  He'd stopped playing in the middle for fear of her well-being, but she had begged him to continue.  “Please,” she whispered in between ragged, harsh breaths.
Years later, he finally understood the swell of pain she always got when she listened to the cadenza of the first movement.  Typical anguish paled in comparison.  The kind she'd felt was an icepick to the back of the throat, scratching at first, then stabbing.  When it bled, all he could do was choke.
She'd always mention when he played it for her per request as she sat next to him on the bench in the lounge after-hours how it reminded her of her mémé, and how they would attend the theatre whenever Tchaikovsky's works were in performance.  She would talk about the Opéra de Nice with its massive, sweeping staircase, and the hundreds of candelabras around it all glittering like stars.  When she'd been a child, those trips to the opera were like excursions to the heavens themselves.  “C'est comme les étoiles, n'est-ce pas?” she asked after adorning the piano with her collection of wax candles once.  Her eyes glittered with the flickering reflection of the flames as he replied, “I agree.”
She used to ask him to repeat the cadenza over and over again.  One night, she'd told him that if she just detached herself enough from the world, she could almost feel the marble of the opera house under her feet, and hear the rustling of her grandmother's silk dresses as she climbed the opulent staircase.  That was a long time ago, back when life was simple and the opera was the only thing that had mattered.
Now if he closed his eyes, he could swear that he was able to smell her perfume linger on the air.  Lilies, with rosewater.  How quickly it had become his favourite despite the simplicity.  Her voice would flutter throughout the lounge, echoing with her replies to his attempts at conversation.  It was like a crystal so clear that he was always shocked to find her gone when he opened his eyes again.
It was like losing her over and over every night.  And yet, he couldn't help himself.  He insisted on keeping company with the ghosts of the past.
Maybe it was like she'd told him when they'd first met: within the music, they would always find each other.
Posted by Kenney Mencher at 11:06 PM 3 comments: 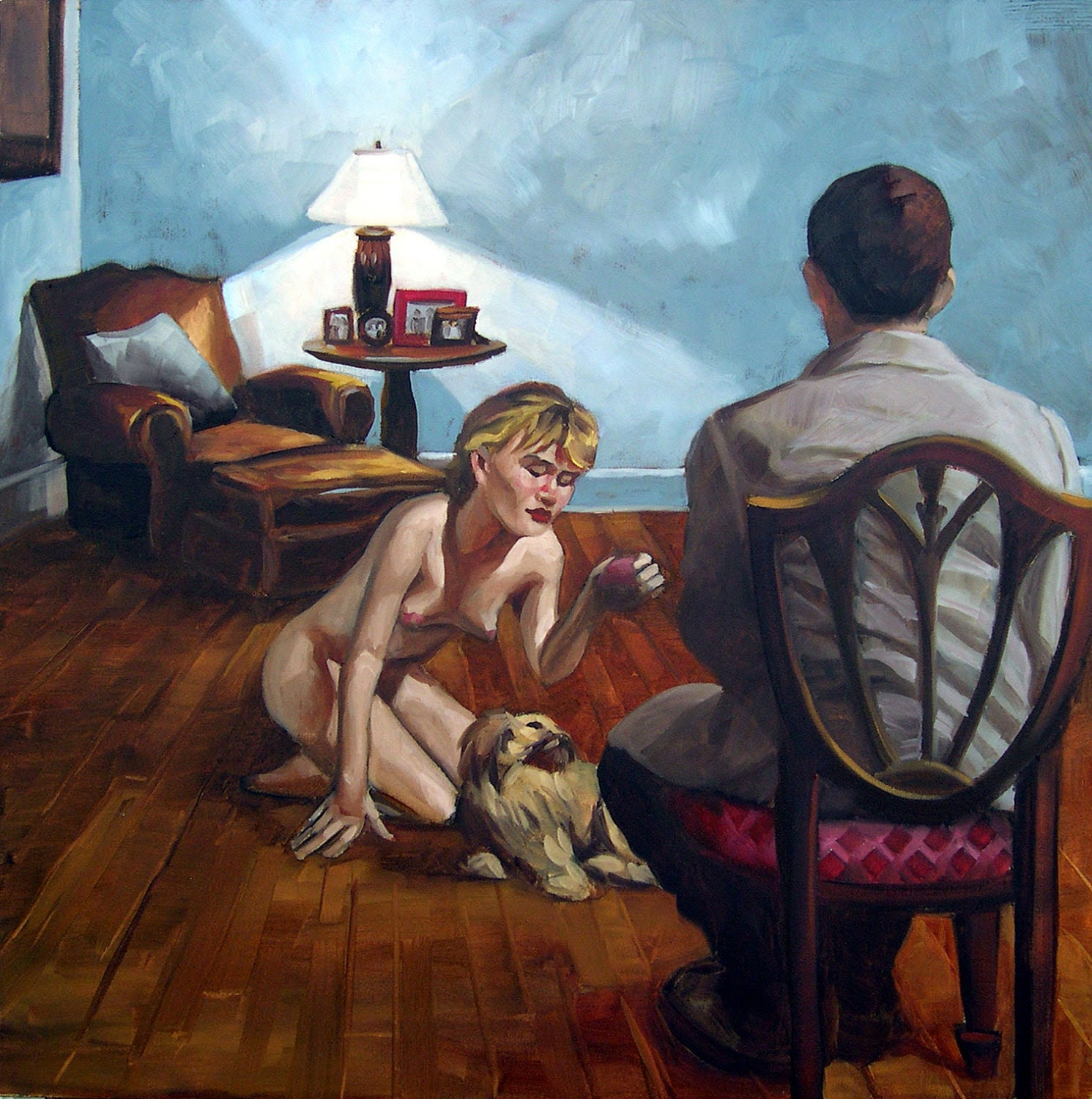 When the couple got back from their trip, John wrote in his little daily journal “Amaranth  has a beautiful tail. When she walks and her butt moves I think I want her. I wonder if we could keep her and play with her for a few days while we decide if we want to get one of our own.”
When the cleaning girl came, she perused John’s diary, as usual. When she had read the page about Amaranth, she got pen and paper and left John and Deena a note saying “Clean your own fucking house, you perverts.” The cleaning woman’s name is Amaranth.
_________________________________________________
CHANGE OF HEART by Cotton Joliet
He had a heart transplant. It was absolutely necessary; without it he would die.
His wife, Ilene, noticed the changes in him beginning the first day he came home from the hospital. Her husband Lucas had been a CEO with a will of steel. He was the quintessential workaholic and feared by many. His explosive temper was legendary. Now he was gentler, kinder, more subdued. In California they would have called him “mellow”. In New York they called it getting soft. Ilene was ecstatic. She loved this new Lucas. He treated her with respect and constantly displayed signs of affection. 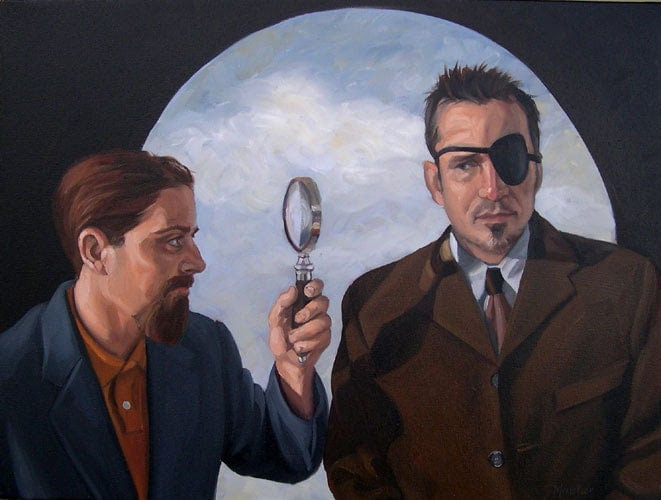 At some point Lucas became obsessed with finding out whose heart was beating so beatifically in his chest. Usually that kind of information is unattainable, but Lucas still had a few strings he could pull. He found out that the heart had belonged to a Tibetan monk killed in a car crash in New York. He had been visiting his dying sister. Lucas began studying the teachings of the sect to which the monk had belonged. He became more and more involved in his studies. Finally, after 7 months, he went to his wife Ilene and told her that he had a calling to join the monastery. Ilene was distraught and hoped it was a phase. She got her husband to agree to see a therapist, which he did. The therapist felt that Lucas was totally rational and had found his calling. So Lucas went to Tibet and lived as a monk for 3 years.
One day Ilene, Lucas’s wife, showed up at the monastery. She said to Lucas, “I thought you might want to read this.”  “We have discovered that our records were in error. The heart came from a drug dealer sharing a cab with the monk. We are so sorry for the mistake.” Ilene was sure Lucas would come home with her finally.
Lucas blanched, composed himself, and said “Then it was my fate to save the drug dealer’s soul. I shall remain a monk.” It’s up to you, the audience, to decide whether you think he made the right decision.
__________________________________________________ The lone guy sauntered into the “hip” cyber café. He almost looked normal, even mundane, if you will accept that label for a person, but he seemed a little nervous. What’s to be nervous about in a cyber café? Maybe a virus?  I don’t know. But, to everyone’s surprise, he held out what looked like a gun in his pocket and said, quietly but with a kind of whacky authority, ”Close down those fucking computers. Come on, all laptops on the table here in front of me. I’m a maniac; I just may shoot if you don’t comply.”
“Oh Jesus,” one man was heard saying,” I was almost through with my report.”
“Now I command all of you to assemble yourself into groups of four and have conversations. I don’t care what about. Just talk, face to face.”
First there was a profound silence, then groups formed. At first, the talk was stilted, but it became more and more animated. After fifty minutes or so, the “criminal” said, “Okay. I’m going to leave now. You can take your computers back after I leave, or you can keep talking face to face. If you want, I guess you can call the police. I’ll be riding a royal blue Triumph motorcycle with racing stripes. It was nice seeing the transformation. Thanks.” And he turned and left. Another profound silence hit the room. And then a huge wave of laughter erupted. The conversations continued.
______________________________________________
Posted by Kenney Mencher at 8:00 AM No comments: