The Winner of the Jacquie M. Balla Contest is W.H. Matlack 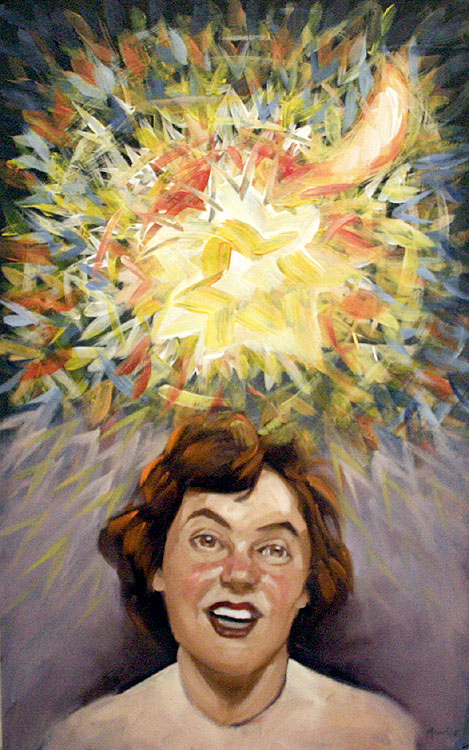 Il ya de nombreux Jacquies by W.H. Matlack
In all respects Mme Jacquie was a normale Parisian housewife with one indulgent husband and three small children. Each morning after her husband went to work and her children were off to school, she would gaze contentedly from her small deck at her beloved Paris. To Mme Jacquie, Paris was her very existence. No one understood her life and her place in the world more than Mme Jacquie.
Sometimes, after her chores were done, Mme Jacquie would take a short, glorious walk through her Paris neighborhood for a croissant at the wonderful little bistro a few blocks away. There the contented and happy Jacques would let random thoughts roll warmly through her pretty head – joyeux fois.
Hélas, one day while she was contemplating the beauty of Paris, a small, dark cloud passed over her contented head in the form of a frowning, older man. The cloud’s name was Pierre Basset, a local intellectual whose hobby was disillusioning young people in bistros all over Paris. He thought of himself as a merchant of reality, and loved to see a happy, young face deteriorate into angst after being “enlightened” to the depressing realities that surrounded everyone. He was an Existentialist heavily influenced by Camus’ darker visions.
It was facile to open a dialogue with the pretty, young Jacquie. All the sophistiquée Monsieur had to do was smile so that his eyes crinkled just the right amount and ask, “Madam, do you know why Paris is so beautiful this time of year?” She would meet his gaze and ask back, “No, pray tell, Monsieur. Why is Paris so beautiful this time of year?”
Thus would begin a series of daily lectures on how France gave Paris to the Nazis for their promise not to destroy it, horrors of the concentration camps, how Existentialism was borne from those camps, and how existence is such a futile illusion, really.
Each morning Jacquie would walk to the bistro, her mind filled with questions she had never before imagined. Each morning Monsieur Basset would answer those questions with more questions until Jacquie’s little head spun with wonder – wonder of things that seemed so obvious to her, but had been so invisible just days before. One day Monsieur Basset gave the impressionable Jacquie a mental challenge. “Jacquie, presuppose to be presuppositionless, and then see if you can experience the raw edge of pure existence.”
Through all of Monsieur Basset’s lectures, Jacquie had remained the dutiful wife and mother. Even so, her husband became increasingly uneasy with the vacant look that would come over Jacquie’s face in the quiet evenings when they sat together and read. Jacquie would read Camus’ The Plague over and over.
Each evening Jacquie felt that she was getting closer and closer to total presuppositionless awareness of, as Monsieur Basset called it, the raw edge of developing reality. Monsieur Basset explained that reality is not a solid, static thing. Rather it was like the bow of a ship that smashes into the formless water and classifies it as right spray or left spray, just as Jacquie classifies every element of her reality without being aware of it.
After that session, Jacquie came home and sat on their little outside deck just looking at everything and trying to not classify it. No longer were the beds made, the dishes done or even the kids kissed off to school. Those were suppositions, and Jacquie worked hard to not make them. Jacquie would just stare and stare.
Next Monsieur Basset focused on the multiple realities of quantum physics – the infinite number of realities and the infinite number of Jacquies. This was a difficult concept to accept until Jacquie realized that it was just another supposition, and she let it go. As soon as she did so, an infinite number of Jacquies began to contemplate the universe in concert with each other.
One day Monsieur Basset told Jacquie to focus on the time distance between her awareness of reality and her perceptions. Jacquie suddenly understood. Her inner awareness was a dimensionless point that existed (totally by itself) in the present. Everything else had occurred in the past before she became aware of it.
As she sat on the balcony, her suppositions all fell away to reveal the totality of pure suppositionless awareness. Jacquie existed alone in the present. There was nothing else except Jacquie’s total, unending fascination with the reality that hit her awareness like a rogue wave every second of the eternity that surrounded her.
The diagnosis reported to her crying family was schizophrenia, but Monsieur Basset knew the truth. He had won her soul.
___________________________________________________________
I chose Il ya de nombreux Jacquies by W.H. Matlack as the winner mainly because Matlack’s  story had magic realist flair in the vein of films like Amelie but also had something in common with age of Dada and Futurism as artistic movements.  (The painting itself was a tongue in cheek homage to Giaccomo Balla’s Streetlight.)  The references to Camus and existentialism brought me back to the Dada Manifesto and Marinetti’s poetry but also had a little flavor of Herman Hesse’s novel “Steppenwolf.”
All the stories seemed to deal with the main characters experiencing epiphanies.  These stories were great and I enjoyed how each author shared in the theme of how sensation and thought can inspire changes in consciousness.  Marilyn’s story had a wonderful sense of how nostalgia and recollection can inspire a type of awakening.   A different type of “awakening” occurs in Alexander Slavitz’s tale of a young woman who on waking from a dream is also awakened spiritually.

Read them all here:
http://kenney-mencher.blogspot.com/2010/12/write-story-about-jacquie-m-balla-and.html


For more contests visit my site:
http://www.kenney-mencher.com/
Posted by Kenney Mencher at 8:51 PM