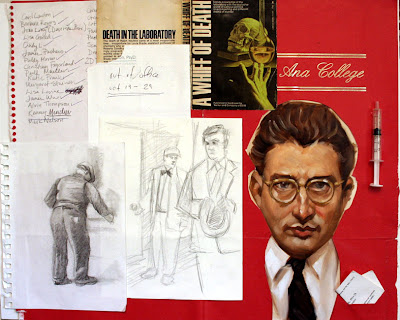 Deliberations by Matt O'Malley
Kenny had found David’s diary and the manila box of small mementos he kept locked away in his study and the look of horror David saw on his son’s face when their eyes met that cold November morning told David all he needed to know.
And there was no sense in yelling at the boy. It was too late and beyond that. All that was to be known was known. David merely walked over to him, took the diary from his hands and cleared the desk of the keepsakes Kenny had placed on David’s work desk. He then carefully, solemnly, placed everything back into the manila box and into the desk drawer. David outstretched his hand and Kenny placed the desk key that David had inadvertently left in the open, into David’s palm.
The afternoon was spent in silence. Kenny had moved a chair some three feet in front of the living room television and sat catatonic, glassy eyed and motionless as David watched him from the comfort of the living room couch, deep in thought.
Evening and a tasteless cold dinner failed to fill the void David felt in the pit of his stomach as he pondered the situation. His son’s eyes were still filled with horror and were now shifting, restless, piercing as he sat across the dining room table. His son’s demeanor reminded him of the caged laboratory animals just before they were to be pulled for an experiment. They always seemed to know what was coming next. David realized he had to do something and it was to start with a sleeping pill that took until ten that night to take effect.
Doctor David Mencher carried his sleeping son into the child’s room, tucked him into bed and then went down the stairs to his study where he poured himself a glass of bourbon and retrieved the manila box and his diary. He scanned through the pages until he found the page that listed names of those who had died by his hand. He considered each and every name, especially those names that belonged to males on his list; all of them who had landed on this list due to no fault of their own, or David’s. Each one of the men had just found David in a compromising position with one of the women on the list; just a matter of them being at the wrong place at the wrong time. Similar to the two names he was about to add to the list.
With a pencil, David now listed Mark Nelson, the neighbor who was asking about the woman he saw entering David’s house the other day, the woman noted as missing on the evening news, and Kenny Mencher, his own son. He pondered these last two names, then clenched his teeth as he rewrote Kenny’s last name in blocky letters and underlined it. He also crossed out Mark’s name “It ends here,” he said under his breath. He then reread all the names out loud and placed a check at the end of each name except for the last two.
From his study’s mahogany bookshelf, David pulled a book that had been made a tomb to hold a syringe and a small clear vial. He filled the syringe with the contents from the vial then placed the vial back into the book and the book back into the bookshelf. Slowly he climbed the stairs to Kenny’s room where the opening of the bedroom door created a rectangular coffin of light that stretched from the hallway into Kenny’s dark bedroom.
David stepped into the light, his frame filling the rectangular space as he stood at the head of Kenny’s bed with the syringe in his hand. He pressed the syringe’s plunger and a drop of clear liquid clung to the tip of the needle. He looked at his son, the covers across his chest rising and falling with each breath. He tried to console himself with the thought that we all eventually die of some sort of heart disease or cancer.
David clenched his teeth and felt for a vein. It was easy enough to find. Years of practice makes perfect. He emptied the contents of the syringe before it fell from his hand and to the floor.
______________________________________________
Surprise and misdirection!  I like having an expectation and then having that expectation overturned.
A startling shift in format from script/dialog to prose form in Luz del Sol’s story reminded me a bit of the simulacra like format of Bram Stoker’s Dracula but with a great sense of humor.  Christina Jeter’s Baron Samedi’s first person point of view was a little bit like crawling into the mind of a sinister predatory figure much like the aforementioned count.  Dee Turbon’s character has a similar story however, his “Doctor” is a bit more sympathetic although both make an attempt to justify their actions.  (I really did sympathize with Dee’s character’s motives.)
All the stories employed an element of misdirection which is obviously a quality that I like they also startled me for another reason most of the stories included my name both as a villain and sometimes as a victim!  Kind of creeped me out but on the other hand it did get my attention.
I chose Deliberations by Matt O’Malley because it had all the best qualities of the rest of the stories, it was a menacing, sympathetic and sharp story with a wonderful surprise Hitchcock like twist to it and clean concise prose style.

Read the rest of the stories here:
http://kenney-mencher.blogspot.com/2010/11/flash-fiction-contest-dr-d-mencher.html


More contests listed on my site:
http://www.kenney-mencher.com/
Posted by Kenney Mencher at 7:45 PM