Matt O'Malley: The Winner of the Benton and Eva Destruction Flash Fiction Competition 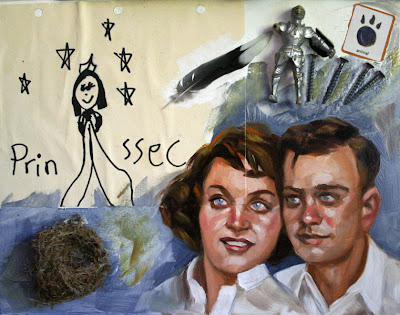 The day the earth split into two halves! by Matt O'Malley

Ten
The gleaming silver bullet shaped rocket stood on the tarmac spewing exhaust as the loading platform pulled further away.

Nine
With the earth splitting from the inside out from a shifting magnetic field, a consortium of nations had searched to find the best, the brightest, and the most genetically pure humans to continue the human race on a new found planet.

Eight
Captain Benton and copilot Eva Destruction, poised to leave a dying earth to travel to the far and distant planet in hopes of saving a portion of humanity, sat in the nose of the rocket as the countdown continued.

Six
He always seemed to have a couple of screws loose and as he aged, he had grown to be a daredevil, bungee jumping, parachuting, race car driving, astronaut pilot.
She always had a nesting urge and as she waited, she had grown to be the brainy, mathematician, physicist, nuclear scientist, inventor doctor.

Five
Together they had a dream white and champagne wedding in the most glamorous and exclusive beachfront resort filled with dignitaries, fellow scientists, astronauts, family and friends.

Four
A year long worldwide traveling honeymoon from Europe to Asia, Africa and South America then back to the States where they were selected to pilot the rocket ship and to be one of the pairs of Adams and Eves.

Three
But the honeymoon was five years ago and today she woke up cranky from her period and he was cranky from nursing a hangover and playing poker late into the night with the boys.

Two
And he was always this way. Impulsive. Reckless.
How could he have forgotten to call her mother and say goodbye!

One
And she was always this way. Impulsive. Reckless.
She broke the gyroscope with her fist.

Zero
It was going to be a long flight.

___________________________________________________
I think I may have to get an editor who is more decisive than I am.  Am I pleased too easily?  I really don’t think so because I often discard books after reading just a couple of pages, but, damn it, all of these all were really great!
I’m going to award Matt O’Malley with the drawing of Benton and Eva because his countdown style prose is an Andre Breton-esque verse that plays a game of “Exquisite Corpse” with the items in the painting and gender stereotypes.   I think I settled on Matt O’ Malley’s because, first “There can be only one.” And second, I could immediately visualize how I could integrate it into the design of my catalog, but, I so dig the others too!
Benton and Eva Destruction by D. Charles Florey excellent, dialog, which created a sense of time and place.  Florey’s story is a sort of Greek tragedy set in the Depression era, enhanced by his homage to films like “Gun Crazy” and “Bonnie and Clyde.”
Wow!  Dee Turbon’s is a cocktail made of one part Lord Byron’s biography, two parts, Greek tragedy and for that American flavor, a splash of “Rocky Horror” too.  I don’t want to spoil it for you but you can probably tell it won’t end well.
Speaking of literary references, this time not so “tragic” check out Roger’s nod to kid’s nursery rhymes coupled with a funny reference to the truism that make men and women so different!
Read all the stories here:
http://kenney-mencher.blogspot.com/2010/11/flash-fiction-contest-benton-and-eva.html
Check out more competitions on my site:
http://www.kenney-mencher.com/
Posted by Kenney Mencher at 1:28 PM