How to paint a glass of water. 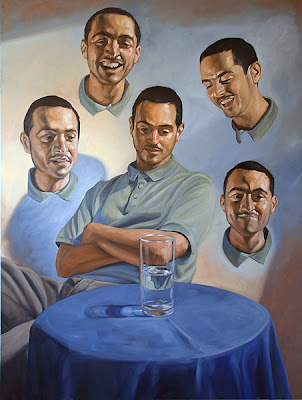 Painting the Glass and How to think about it.
Buoy oil on canvas 36"x48"

The most important thing in painting a clear vessel of water is to detach yourself from the idea that it is a cylinder with distinct outlines around it.  Because the outlines of the glass dissolve and merge into the background and the curve of the glass and the water in it distort and change what is seen through it, visually what you are really seeing is a series of interlocking colored shapes and tones that often do not correspond to the outlines of the glass cylinder.
I began by first painting a neutral gray tone for the background with a mixture of black and white gesso.  On top of this neutral gray I did the under drawing in 2B charcoal pencil.  Usually I use a T square to create a vertical axis for any cylindrical object. In this case, however, I indicated the midline of the water glass and the ellipses by eyeballing them and then double-checked the ellipses with an ellipse guide. The rest of the details in the drawing are guides to show where the light and color breaks occur on the glass.  I think of the glass of water as a series of abstract shapes that are filled with value and color. 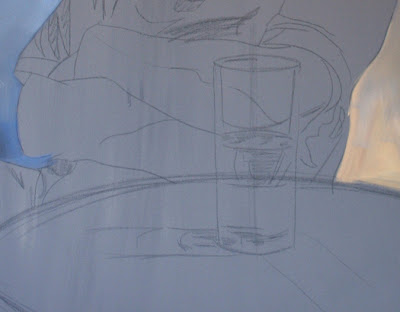 In this painting, my underpainting of acrylic corresponds closely to the colors of the painting I will be putting on top of it.  The glass of water is the focus of the painting and sits in the foreground, so I painted everything else behind it in acrylic paint first. Water refracts and reflects the objects and colors around it, so as I painted the tablecloth I used some of the same colors in the glass of water.  I also observed and painted the light passing through the glass of water and the forms of light and shadow it created on the tablecloth. 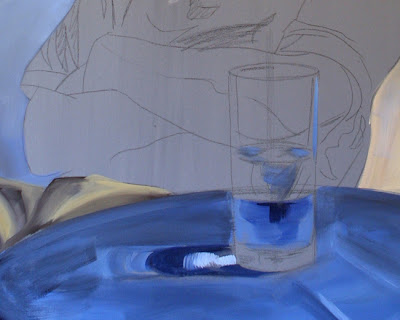 Still working in acrylic, I rendered the shirt visible through the water glass.  The glass and the water in it did not change the colors or value as they passed through; rather, the water and the curve of the glass magnify, shrink, and in general distort the shapes of the shadows and colors that pass through it.
Having completed the acrylic underpainting, I began painting in oil.  I worked from background to foreground again, and since this painting took multiple days, I saved the colors that I mixed for the walls, tablecloth, shirt and flesh tones in plastic wrap to reuse later.  I planned to use some of the leftover paint in the highlights and reflections on the surface of the glass.  After painting the wall behind the figures and the heads and arms, I began work on the tablecloth, shirt, and glass. Then I painted some of the abstract forms the shirt made in the glass itself. 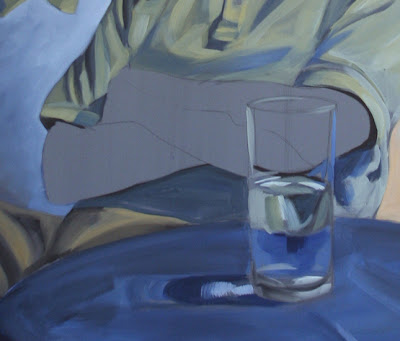 Having rendered the tablecloth after the shirts and pants, I incorporated some of the tablecloth colors into the glass.  After rendering the arms of the figures, I let these dry overnight.  Again, I preserved all the colors I had mixed in plastic wrap.  The next day I returned to the glass.  Now that the paint was mostly dry or tacky I was able to scumble some of the highlights along the rim and the surface of the glass.  I also repainted some areas wet into wet especially the reflections of the flesh tones on the bottom of the glass and in the water itself. 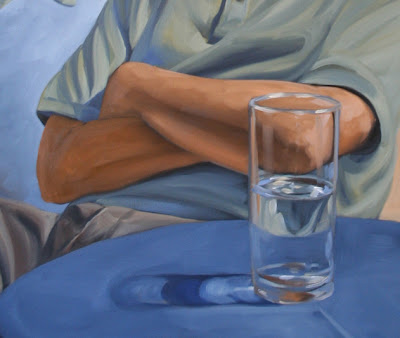 Buy this painting on Etsy for $700

More "How to" Articles and Tutorials
I have a solo show until June 25th 2011
Renovated Reputations and Manufactured Memoirs
is a solo show at ArtHaus gallery and an illustrated anthology of short stories in which Griffin and Sabine collide with neo-noir fiction.