I Make Art for Other People

I make art for other people, not for myself.  (Not a misquote.)

I grew up with so many of my art friends and educators telling me that “a true artist always make art for themselves.  Artists do NOT make it art to for other people.  Self-expression and artistic integrity are more important than selling your work.

When confronted with these clichés I always wondered why I couldn’t have artistic integrity and make a good living making art.  I also wondered what was so wrong with making art directed towards a particular audience or client and still be a respected or good artist.

I totally get how that kind of conventional wisdom sounds right, especially after being fed the romantic ideas about artists that when exposed to a close inspection just don’t make sense.  Cases of artists accused of selling out who I’d like to be:  Norman Rockwell, Velasquez and John Singer Sargent.

A person who couldn’t sell work but is cited as having a fantastic career and maintaining artistic integrity, we all know many of these artists personally.  I don’t regard them as being particularly happy people nor as successes and I don’t think other people will celebrate them after they are dead.

How about a famous “success” story that we have all been taught, “Made art for themselves and maintained artistic integrity at the risk of being a financial disaster.”  Examples, Modigliani, Gaugin, and his room mate Vincent Van Gogh.

Vincent Van Gogh was making religious art.  He also made art with the intention that he would like someone to buy it and no one did while he lived.

I suspect that if he were given the choice between being,

1) a happy person and a selling artist

2) an unhappy person not selling his art

I’ve never read anything in all his letters that expressed the idea that all his suffering was vindicated by making art not did he ever really express ideas concerning artistic integrity and uniqueness.  Read his letters and documents they are available online.  He complained an awful lot about money to Theo.

Here’s my story.  I’m not a Blockbuster level artist but I make art and make a living at it because I think about my audience or subject matter that I think might be enjoyed by other people.

I think about an imaginary, sometimes real people who are collectors, pop in to my head, and I make something that I think both my audience would like and I would enjoy making art about.  Example, I make art about Leather Daddies because I think they look cool and I also know that other people think so too.

I make paintings of older hairy men, “Bears,” because I know that there is a demographic of men and women who find this attractive and want to engage with the subject, I love the subject because that’s how I look and it makes me feel good to paint men who look like me, and I love painting the male figure, mainly because I’m better at painting them than almost anything else.

I first started painting and drawing heroes because I wanted to make pictures that I could share on Facebook that I thought might friends might get some inspiration from.  I was hoping that my pictures would counteract the negative stuff going on in the world and express a hopeful alternative.  I actually did not start making them to sell, they were meant as disposable art that I would put in storage.  When I put them up for sale I was surprised at the popularity. 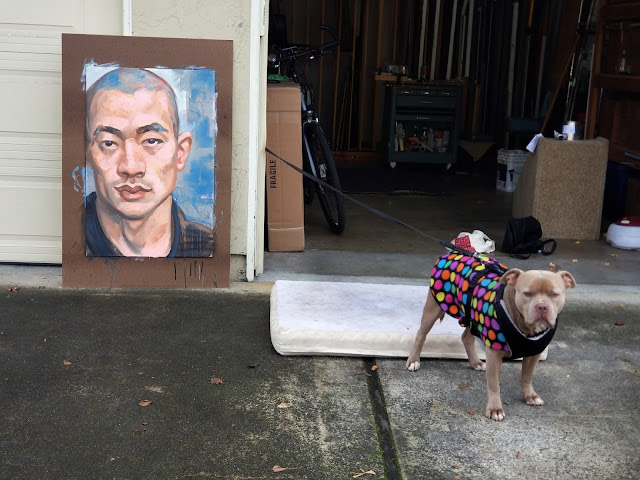