What you should know about the “Bison from La Madeleine”

It has a variety of names, Bison with turned head, fragmentary spearthrower, from La Madeleine, Dordogne, France ca. 12,000 BCE.  Is now in Museum in France close to where it was found around the middle of the 19th century.

This bison which is only about 4 inches long. It was found in La Madeleine, it started probably as just a small chunk of bone that they decided to preserve as much of the bone as possible and not carve away too much of it.  The shape of the bone may have suggested to the artist the outline of a bison.  The artist would have been aware that any delicate extensions like legs could be easily broken off.   It's an interesting idea that the materials and the shape of the materials suggested the form to the artist.  One of the important vocabulary terms in art history classes to describe making something like this is called “subtractive sculpture.” This means that anything carved away or subtracted from something creates its form. It’s a buzzword but I bet it’ll help you get in a on the test. 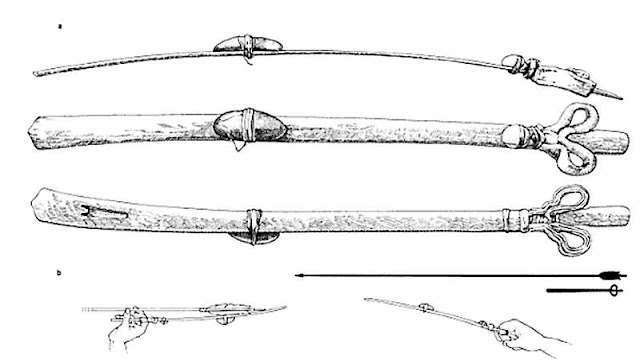 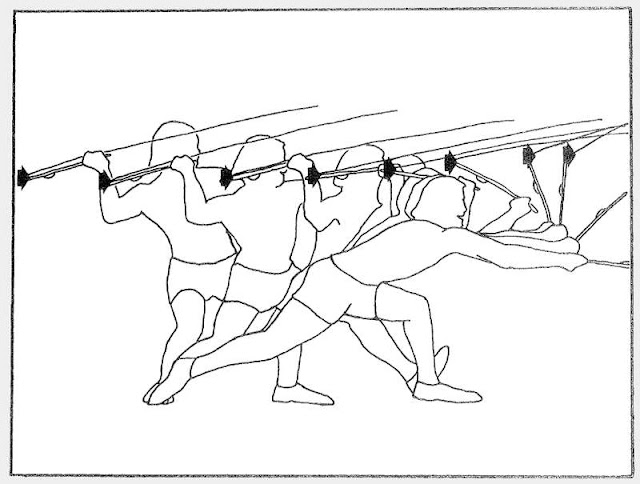 It appears to be part of an antler that was carved a way to make the shape of the bison turning back and licking its hindquarters. There are several other depictions of bisons doing this and most likely the reason why the bison is being depicted this way is because it uses less antler to create it. Some textbooks suggest that the form of the antler that it was carved from suggested to the artist the shape and form.

It appears to be a broken off section from a larger antler, other tools may from antlers with similar designs on them have been found and they appear to be a kind of tool that is used to throw spears and increase the force through leveraging a longer arc or sweep of the arm. There’s a nice description of this at the beginning of the film “The Cave of Forgotten Dreams.” So the most logical suggestion of how this thing was used is that it was an ancient tool that was used to increase the force of throwing a spear.

Art historians, archaeologists, anthropologists often try to do a deeper reading of what objects like this symbolize. Based on what we know about prehistoric man in the region of France that were talking about it appears that a bison would have been a very useful animal to hunt. It also be a hard animal to hunt. Some books suggest that bison bones were prepared by burning them down to make grease which would’ve been an important dietary supplement. Most likely, because of this evidence and because a bison is something that was important to them are the main reason for creating something in the shape of the bison.  However, based on what we think we know about religion and how humans think about supernatural kinds of things it may be possible that the iconography or what the bison symbolizes goes deeper than what we understand. Here’s a couple of suggestions about what the iconography or symbolic meaning of bisons are for ancient peoples.

It may have just been a work of art for the sake of beauty or a religious fetish.

1 a : an object (as a small stone carving of an animal) believed to have magical power to protect or aid its owner ; broadly: a material object regarded with superstitious or extravagant trust or reverence b : an object of irrational reverence or obsessive devotion : prepossession c : an object or bodily part whose real or fantasied presence is psychologically necessary for sexual gratification and that is an object of fixation to the extent that it may interfere with complete sexual expression

2 : a rite or cult of fetish worshipers

It also could be a fetishistic item in a way for instance think of kids to put posters the celebrities in their locker on their wall and it's almost like they have little altar to that celebrity and by owning in effigy or a picture of that celebrity icon they have some sort of connection to that icon.  Have you ever taken a lock of hair from someone? Perhaps a mother preserves a lock of hair from her baby. The hair is symbol but it is also like holding a little piece of that person.  If you have a representation of something like for instance a bison it could be a representation of something that was important to them and by holding onto it.  They might've been able to feel that they have some kind of control over real bison so those are some of the reasons why small sculptures from the Paleolithic era might've been made. I think that I am it's interesting to take a look at the motivations from the cultures that we know a lot more about who share similar technology and apply what we know about those cultures to the prehistoric eras.

Posted by Kenney Mencher at 2:28 PM