Form:  This lifesize bronze sculpture stands in a contrapposto stance.  His musculature is that of a young boy, probably around the age of thirteen or so.  The hat he wears (described by Stokstad as jaunty) is anachronistic and possibly out of place even for a shepherd boy from Italy in the 15th century.  David stands atop the bearded and helmeted head of Goliath who he has just vanquished.
Iconography and Context:  According to Janson, "this is the first life sized free standing sculpture since antiquity."  The figures size and pose are almost direct references to the classical tradition of casting idealized athletic figures in bronze with the lost wax process as evinced by the Doryphoros and Riace Bronzes (although they would not have been familiar with the bronzes since they were discovered in the 1970's).  In this way, Donatello would have combined the Bible story of David and Goliath with the classical and humanistic concept of kalos.  In effect, he was uniting both a theological and neoplatonic/humanistic point of view.

You may find Donatello's David a little bit ridiculous looking in his sun hat and almost effeminate stance and you are in good company.  Irving Stone's the chapter entitled "The Giant" from the book The Agony and the Ecstasy excerpted in Liaisons (page 164) Michelangelo explains why he thinks Donatello's version of David is ridiculous. 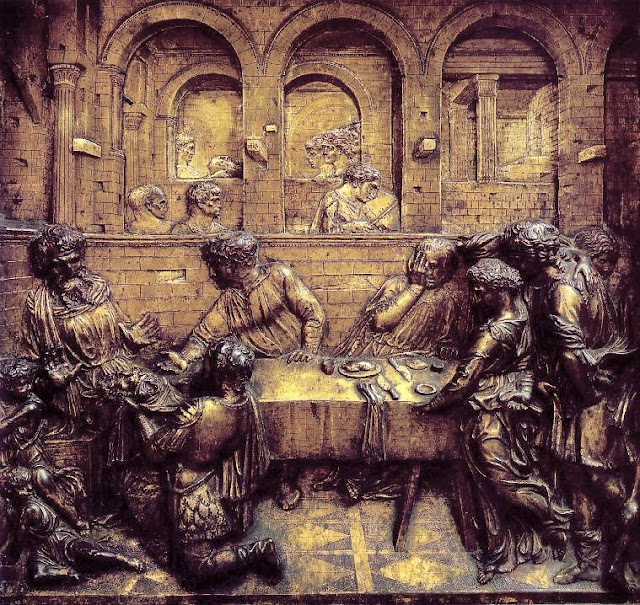 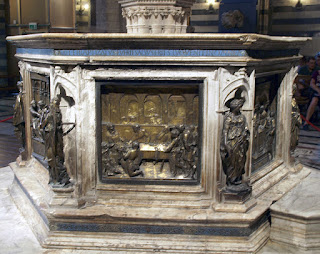 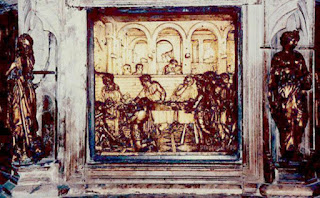 Similar tales, such as "Judith and Holofernes" and "Suzanna and the Elders" (both excerpted from the Old Testament in Liaisons pages 197-214)  depict men's lust for women as responsible for powerful men's demise.  The depiction of women in this way is interesting because it is a theme that becomes a popular one throughout the Renaissance and ties very neatly into the concept of Platonic love.  By the time the 20th century rolls around depictions of women with heads on  trays become so commonplace that the story of "Judith and Holofernes" and the "Dance of Salome" become indistinguishable.

17
Herod was the one who had John arrested and bound in prison on account of Herodias, the wife of his brother Philip, whom he had married.
18
John had said to Herod, "It is not lawful for you to have your brother's wife."
19
Herodias harbored a grudge against him and wanted to kill him but was unable to do so.
20
Herod feared John, knowing him to be a righteous and holy man, and kept him in custody. When he heard him speak he was very much perplexed, yet he liked to listen to him.
21
She had an opportunity one day when Herod, on his birthday, gave a banquet for his courtiers, his military officers, and the leading men of Galilee.
22
Herodias's own daughter came in and performed a dance that delighted Herod and his guests. The king said to the girl, "Ask of me whatever you wish and I will grant it to you."
23
He even swore (many things) to her, "I will grant you whatever you ask of me, even to half of my kingdom."
24
She went out and said to her mother, "What shall I ask for?" She replied, "The head of John the Baptist."
25
The girl hurried back to the king's presence and made her request, "I want you to give me at once on a platter the head of John the Baptist."
26
The king was deeply distressed, but because of his oaths and the guests he did not wish to break his word to her.
27
So he promptly dispatched an executioner with orders to bring back his head. He went off and beheaded him in the prison.
28
He brought in the head on a platter and gave it to the girl. The girl in turn gave it to her mother.
29
When his disciples heard about it, they came and took his body and laid it in a tomb.
For all the videos in order with a textbook and study guides please visit: https://www.udemy.com/user/kenneymencher/

Posted by Kenney Mencher at 1:00 PM