Posted by Kenney Mencher at 9:10 PM No comments:

Posted by Kenney Mencher at 9:58 PM No comments:

Posted by Kenney Mencher at 12:01 PM No comments: 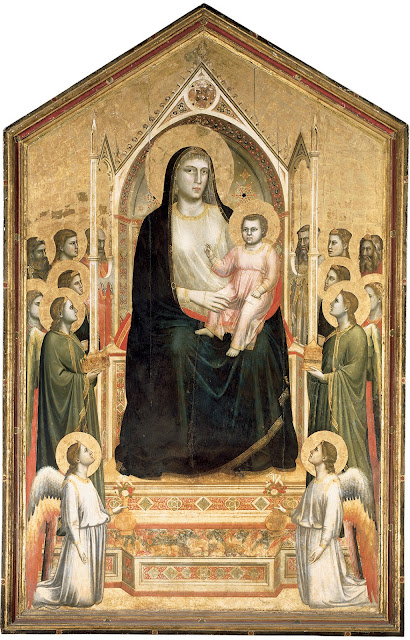 Giotto’s version of the "Virgin and Child Enthroned" is an excellent example of how rapidly late Gothic art evolved into the Renaissance style. Giotto was the student of Cimabue and built on Cimabue’s initial plan or schema of how to paint the theme of “Throne of Wisdom.” Giotto builds on the arrangement and the composition that was established in the late Gothic era but changes it radically by including light and shadow, the illusion of space, humanistic gesture, and more accurate anatomy.  Compare Giotto’s version against Cimabue’s version. 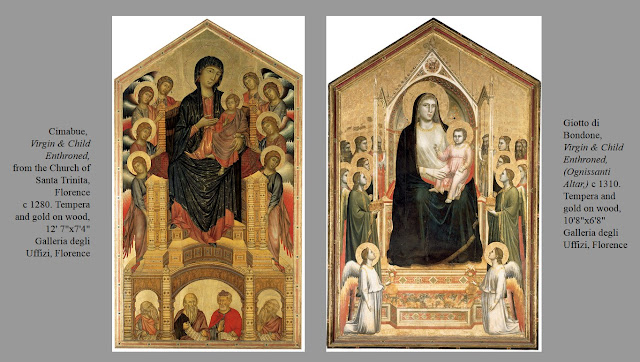 Form:  Giotto's painting of the Virgin child shows some marked formal differences. Giotto is a kind of special effects master. His paintings are more three dimensional. He also uses more contrasts of light and shadow. This is called chiaroscuro. He also uses overlapping of the figures to create a sense of space. Compare to Duccio or Cimabue's paintings in which the figures that accompany Mary seem to be standing on bleachers as if for a class photo. Giotto also uses more lifelike gestures. The figures interact and tend to regard one another. Notice the tilted heads in adoration of the Virgin. The figure of Mary is more lifelike and even dresses more in the Italian style. Notice that her hair is slightly uncovered and her clothing reveals the anatomy beneath almost like the wet drapery style of the ancient Greeks. The throne is also more convincingly rendered it looks like an actual architectural structure.

Iconography:  In an overt description of the iconography Giotto's rendition of this then seems identical to Cimabue's but on closer inspection, the naturalism and illusionism of the work is symbolic of some of the fundamental changes that were occurring during the late Gothic to Renaissance periods.

The naturalism relates to the study and pursuit of humanism.  The ideas of Christian and Catholic though go through a radical change with the canonization of St. Francis.  The idea that one should and could emulate the life and behavior of Christ meant that art needed to relate more to the individual and strike a chord of compassion.  The heightened realism of such images was designed to create a sense of sympathy or empathy with the religious characters they portrayed.

Study with me here: https://www.udemy.com/user/kenneymencher/

Posted by Kenney Mencher at 1:00 PM No comments: 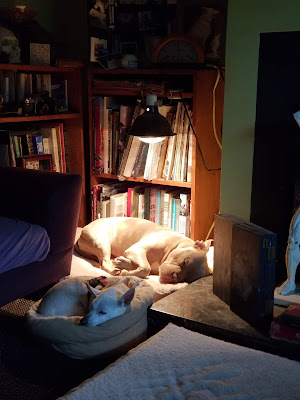 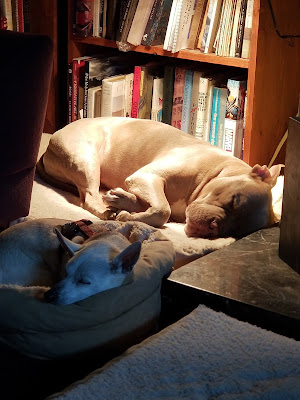 Posted by Kenney Mencher at 12:21 PM No comments:

Art History: How to Analyze or "Break Down" a work of art or what are the main characteristics of a work of art?

What are the main characteristics of a work of art?

I think that there are three major themes that a work of art can be analyzed.
The physical or tangible, or formal characteristics which are in physical properties. This includes size, color, texture, what it is made of. In general formal analysis is how it looks and feels.
The second characteristic has to do with the work’s meaning and what it represents. This has to do with the story it tells and how people interpret the meaning of the painting. Some times this is referred to as iconography.
The third category or characteristic has to do with a history, geography, and how it was produced. Who bought it or asked for it to be made? Where was it sold? What was the city or culture like that made it? When in history was it made? The context that surrounds the work.
Formal Analysis
form
(1) : orderly method of arrangement (as in the presentation of ideas) : manner of coordinating elements (as of an artistic production or course of reasoning)
(2) : a particular kind or instance of such arrangement
b : PATTERN, SCHEMA
c : the structural element, plan, or design of a work of art -- visible and measurable unit defined by a contour : a bounded surface or volume
(3) The literal shape and mass of an object or figure.
(4) More general, the materials used to make a work of art, the ways in which these materials are used utilized in terms of the formal elements (medium, texture, rhythm, tempo, dynamic contrast, melody, line, light/contrast/value structure, color, texture, size and composition.)

Form consists of the physical properties of the work. Whether we look at a sculpture's size, mass, color, and texture or a poem's order of elements and composition, all are part of the work's form. When you are doing a formal analysis, you describe the way that the work looks, feels, and is organized. The next passage is a formal analysis of a work of art; the Augustus of Primaporta is a statue from the first century BCE.
The statue stands six feet eight inches tall and is made of white marble. It depicts a male figure wearing armor and some drapery, with his right arm raised. The figure carries a bronze spear or staff in his left hand. The texture of the hair and skin mimic the texture of real hair and skin. Augustus stands in contrapposto, appearing to be stepping forward with most of his weight resting on his right hip. Attached to his right leg is a small dolphin with a winged baby on its back.

One of the more important elements concerning form is the idea of composition. Composition can include how things are laid out in two dimensional space or how the picture plane is organized.
For example, the top two images in this illustration are asymmetrical. The blue circles are not evenly distributed through out each rectangle.
The bottom two most images are symmetrical. There are balancing elements on each side of the blue sphere in the lower left hand image. Even though one of the objects is a square and the other a circle, they take up about the same amount of space and have the same visual weight.
The boxes on either side of the tall white rectangle are mirror images of each other and this can be referred to as symmetrical too. Since you could draw a vertical line down the center of the center rectangle and on each side of this imaginary line it would be a mirror image, this is called bilateral symmetry.
The "Whirling Logs" textile on the left is arranged in a bilaterally symmetrical fashion because we could draw cut the design in half and the left and right sides are nearly a mirror image of each other. Nevertheless, for all its symmetry, this textile appears kind of flat looking.
Composition also has to do with the creation of the illusion of space. When we look at pictures (as opposed to sculptures as the Augustus above) we often think of the picture as an imaginary window. The front of the window, or the glass, is the picture plane that we look through.
In order to create space artists conceive of the picture plane as having three planes that recede back. In order to create space in the picture plane and the appearance of a foreground, middleground and background we can overlap objects to give this illusion. If there is nothing overlapped then we can say that there is no real illusion of space in the picture.
These two pictures demonstrate this idea. If you look at the one on the left, there is very little overlapping in the picture plane and the figures seem to be pressed against this imaginary window. While the one on the right has some overlapping and we can tell that some figures are in front of others. This overlapping gives us a sense of space.

These two sculptural friezes demonstrate these ideas in a three dimensional form. If you look at the one on the left, there is very little overlapping in the picture plane and the figures seem to be pressed against this imaginary window. While the one on the right has some overlapping and we can tell that some figures are in front of others. This overlapping gives us a sense of space.

Here is an example of a formal analysis of the Greek tragedy The Bacchae written by Euripides in 406 BCE. You can use a similar format of analysis when examining a work of art.
The Bacchae is play written in a chant form called dithyramb. Musical instruments, especially the drum, were used to keep time in the performance of the play. Approximately eighty percent of the play is dialogue while only a small portion is devoted to action on the stage. The order of the narrative is predictable and therefore symmetrical because there is a continuous cycle of basic components that are repeated throughout the play. These components are known as the prologos, parados, episode, stasimon, and exodos. The repeated sections are the three central components of the parados, episode, and stasimon, which are retold in predictable form as many as five times in the typical Greek tragedy.

Another look at schema and correction:
Summary of Gombrich
Renown art historian Ernst Gombrich developed a theory to explain these adaptations and changes and refered to it as schema and correction. If we were to look at the Archaic period's art and architecture as the plan or schema, we can see how the later Classic period might have taken the archaic art as its schema and updated it in order to make the designs more pleasing according to the later tastes. These changes are referred to as the correction.
The next update or correction occurs when the same pose and musculature from the Doryphoros were adopted and adapted for use by the Romans in the portrait of Augustus.
To understand his theory called "schema and naturalization," or "schema and correction." To understand it you basically just need to know the definitions of three words.

Gombrich's idea can be expanded to looking how later groups can take the earlier work of art and mimic it (mimesis). This is a kind of Darwinian theory kind of like Darwin's theory of the "survival of the fitest."
Read some more stuff by Gombrich if it interests you!

The next passage is a contextual analysis of the Augustus of Primaporta.

The portrait of Augustus of Primaporta is work of political propaganda. Augustus waged an extremely profitable series of wars and was able to extend the Roman Empire's borders. His ability to control the Senate maintained his status of unchallenged power within the Roman city as well. The unnaturally tall height of the statue is symbolic of the god-like status of Augustus because the average height was around five feet. The statue of Augustus is a correction of an even earlier sculpture called the Aulus Metellus.
Augustus's raised right arm symbolic of his abilities as a master orator and refers and builds on the iconography of Etruscan portrayals of great statesman such as depicted by the Aulus Metellus. The raised arm, a symbol of rhetorical power as a speaker is combined with the bronze staff and armor are references to the abilities that any Roman leader should possess. In some ways, this is the originating idea of our conception of the "Renaissance Man" of the 1500's. The references to the Aulus Metellus statue, the contrapposto pose (invented by the classical Greek culture) and the Cupid (representing Augustus as a descendent of the gods) grant both the Augustus Primaporta, and Augustus himself, an authority based in time honored traditions.


Study with me here:  https://www.udemy.com/user/kenneymencher/
Posted by Kenney Mencher at 1:00 PM No comments: