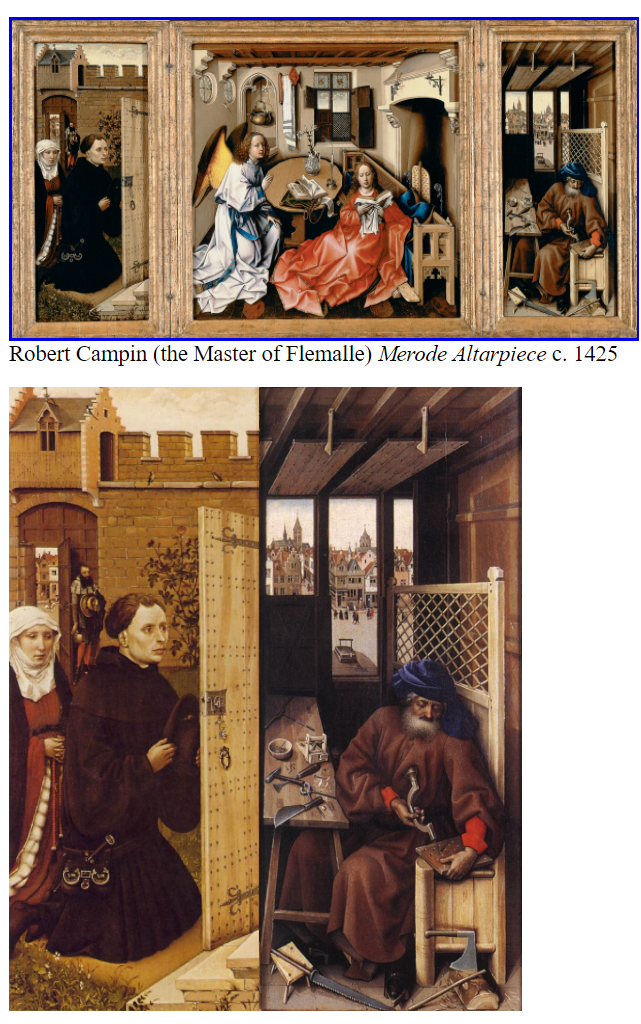 Iconography: This painting is overtly a  genre scene.  The idea behind making this scene look like a scene from everyday life is meant to make the viewer identify with the message of the image.  If a person who sees this image identifies with Mary and sees that Mary lives in a home similar to their own they may feel like it is possible to be like her.  Therefore, all the objects and trappings of the home could also have similar meanings and therefore, "God is in the details" in another way as well.  For this reason, the iconography is important and often has a dual or submerged meaning sometimes referred to as submerged symbolism.If this image looks familiar to you it's probably because it is very similar in for to some earlier paintings of Annunciations we have looked at.


The Merode Altarpiece was created by Robert Campin, a Flemish artist (previously known as "the Master of Flemale"). The picture is a triptych, composed in three hinged panels (the outer wings can be closed over the middle panel, and probably has another painting on the closed wings). A particularly northern aspect of this painting are the many details, which are rich with symbolic meaning. The central panel focuses on Mary, who is absorbed in her reading. The angel Gabriel comes to her, announcing that she will be the mother of the Christ child. Symbols of her purity include the vase of white lillies, the open biblical text, (Mencher's note: the open biblical text is probably a book or hours like the Limbourg brothers)  and the white linen. Close inspection also reveals an image of Christ on the Cross, floating from the direction of the circular windows, and the extinguished candle probably also relates to his death. The tilted perspective of the room allows all of the contents to be seen more easily than if he had used linear perspective (which has, by now, spread to the north, but not always used). Note also the gothic details evident in the architecture. To the left, a couple kneels at Mary's doorway to witness the scene (these are the donors who paid for the painting), and the right panel reveals Joseph working in his workshop. He is building mouse-traps, which is symbolic of Jesus' "trapping" of evil.
http://www.urtonart.com/history/Renaissance/northrenaiss.htm

The iconography of flowers plays particularly strong into this image because in the left hand panel we have an image of who is most likely the patrons of the image who are kneeling just outside of the door.  This patron could be in the guise of a Saint, perhaps Peter, because of the key, or John the Evangelist.  The flowers he is almost kneeling on are violets.  Violets, although royal in color, grow close to the earth and are often walked on.  In this way, these flowers represent Mary, who is both royal an humble.  The rose bush behind them also may represent Mary because images, such as the rose windows of Gothic cathedrals, represent Mary and her passion.

Context: You've probably noticed that the caption above gives two names: Robert Campin and the Master of Flemalle.  This is because there originally was a series of paintings attributed on the basis of style to a single painter but historians didn't know his name but they knew he was from Flemalle.  Later on researchers discovered,


Documents show that Campin was established as a master painter in Tournai in 1406. Two pupils are mentioned as entering his studio in 1427--Rogelet de la Pasture (generally identified with the great Rogier van der Weyden) and Jacques Daret. The only documented work by Jacques Daret, an altarpiece executed for the Abbey of St. Vaast near Arras, shows close stylistic analogies with works by Rogier van der Weyden on one hand and works earlier in style by the Master of Flémalle on the other. Both seem to proceed from common models, for they obviously are not copies of one another. As the Tournai records give the name of Campin as master of both Daret and Rogier, it has been generally assumed that the Master of Flémalle may be reasonably identified with Campin. Some scholars, however, have stylistically considered the works ascribed to the Master of Flémalle as early works by Rogier himself."Campin, Robert."   Britannica 2001 Standard Edition CD-ROM.   Copyright © 1994-2001 Britannica.com Inc.   November 19, 2002.

And so the debate goes on.Context and Iconography: Art historians have often described this image as one that is full of "submerged symbolism."  This means that the symbolism of the image is not exactly clear and many historians invent complex theories in which to interpret the introuction of such elements as mouse traps.  One historian has proposed that the mouse traps represent that Jesus is the rat catcher of heaven.
Some of the debate about the iconography of this image stems form the development of new subject matter in art because of the rise of a new class of people.  The new merchant classes were now beginning to commission artists to paint their portraits.  In the process of including every day people in these images an element called genre began to show up in art.  Genre in French means a kind, but art historians have assigned a different meaning to the word.  A genre element is one in which an everyday person or objects appear in the painting.  Unfortunately for art historians, the introduction of genre elements  introduces some confusion into the interpretation of some of these images.  In general though, the introduction of genre is symbolic of the rising of a new class of people who are patrons of the arts in Europe.

Study with me here:  https://www.udemy.com/user/kenneymencher/
Posted by Kenney Mencher at 5:16 PM