For all my videos in order with an on-line text please visit:
https://www.udemy.com/user/kenneymencher/

Form:  This is a massive painting done in oil rather than fresco.  This is significant because monumental paintings in the past was usually executed in fresco.

Aside from the more obvious Mannerist distortions of the figures' anatomies, this painting demonstrates a slight break with other Mannerist's use of color in El Greco's use of a low key or earthtoned palette for some of the regions of the painting.  This use of color is almost iconic.

Iconography:  Count de Orgaz was a significant and important patron to the Church.  In order to glorify his contributions and patronage a monumental image was called for.  The grandiosity of the Count is further complimented by the supernatural vision of the Heavens above which open to greet him.   He is further complimented by the company he keeps and by those important individuals who are attending his funeral.  The funeral is well attended by the Spanish nobility of Orgaz's time but their faces are updated and replaced by members of contemporary Toledo society.  This is done much in the same way that Raphael gives cameo appearances to his contemporaries in his School of Athens.  El Greco even includes his own son in the lower left hand corner and provides him with a handkerchief monogrammed by the artist himself.  But the really honored guests are Saints Augustine and Stephen who appear to be helping to entomb the Count.
Heaven and earth are distinguished symbolically through the use of color.  Saints Augustine and Stephen and even the Counts armor are depicted in colors that echo the ones in the heavenly scene above.  The earthbound participants are literally wearing earthtoned colors. 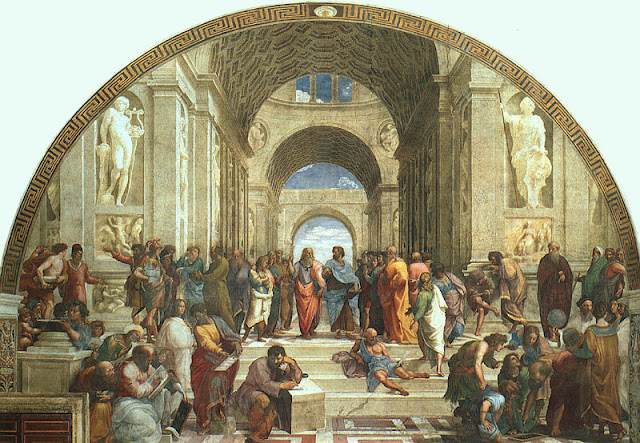 Context: El Greco is a nickname which chronicles or traces all the places where El Greco lived and where he was born.  He was born in Crete (then a Venetian possession but still considered a Greek island by the Italians) Doménikos Theotokópoulos moved to Venice since he was officially considered a citizen.  There he acquired the nickname of il Greco (the Greek.)  After studying Venetian painting and possibly realizing that the competition may have been a bit too steep, Theotokópoulos moved to Spain in search of more commissions.  In Spain, it is possible that the "il" article in front of his name was exchanged for the Spanish one of "El."
Posted by Kenney Mencher at 4:27 PM