What you should know about Lucian Freud

There are some artists who are household names at this point. Especially for figurative painters there is one artist who stands out more than others in terms of being the quintessential “fine artist” who paints figures. I’m talking about Lucian Freud. Pronounced, according to his studio assistant “looshun,” is one of those artists that none of us can afford.  However, most of the artists I admire refer to Lucian Freud as one of the great artists of the 20th century.

Probably the most important thing about Lucian Freud’s work is that it looks beautiful and as a physical texture that complements the image. It’s almost as if the layers of paint that described the figure are like a skin.  Probably the most important qualities of Freud’s paintings are how they look and feel. The physical qualities stand out at first more than the content of the images.

In terms of how Freud’s paintings look the first thing that appeals to most people is that it’s the nude form and it looks very real in some ways. However, there’s a distortion in the anatomy of Freud’s paintings that some people find disturbing and for this reason some people also find it really beautiful. In some instances, he exaggerates features in the face and then in the case of women, almost takes it to a grotesque level. It’s almost like finding something kind of grotesque and ugly beautiful in a way. 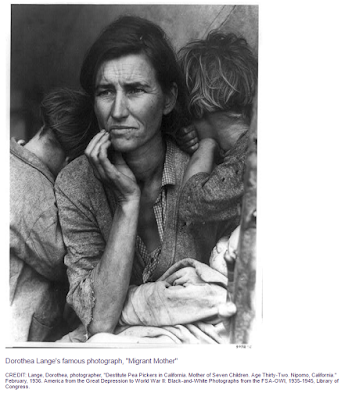 For example, some people really love the photographs of this WPA era photographer named Dorothea Lange. If you look at her photos these people are so ugly that their beautiful and they are almost caricatures.  The shifts of value and shading are part of their beauty in the same way that shading is part of Lucian Freud’s work. In some ways, even the content of Dorothea Lange’s portraits are similar in a psychological fashion to Freud’s because they don’t deal with overtly beautiful content.

Freud, in the same way that Dorothea Lange and even Gothic novelists exaggerate the grotesque, Freud renders something ugly into something beautiful. Part of how he does this is how he exaggerates the point of view and perspective in which he paints the figures from. This also distorts how we see the figure because it’s closer to optical reality than it is to photographic reality. Freud also exaggerates and distorts parts of the anatomy.

For example, Freud loves to paint almost grotesquely overweight people because the flesh is so interesting to paint. Likewise, Freud does not shy away from anatomical details such as bony knobs on knees, awkward looking angles in torsos and the overall skeletal structure.

He also does the same thing with skin tone and color. It’s kind of funny but the skin tone in Lucian Freud’s paintings feel an awful lot like how the color in some English movies looks when they’re portraying how gray it is in England. 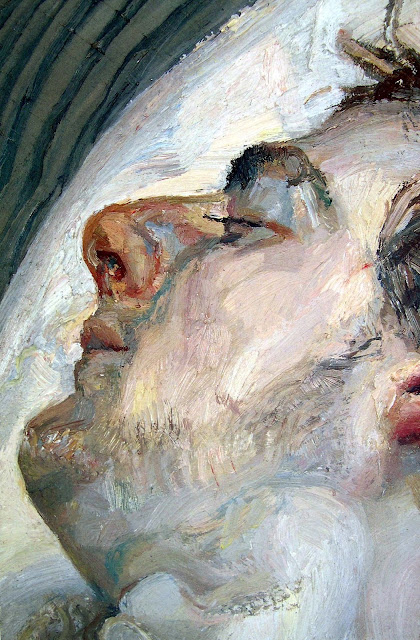 Even in some of the warmer tones of Lucian Freud’s depiction of flesh tones he kind of inserts what’s called a complementary color such as a gray or a blue which automatically takes it down a notch in terms of feeling orange or pink. In a way, some of his flesh tones look almost as if there green. I think he was using burnt umber and black but I haven’t really researched his palette. The flesh in Freud’s versions of skin color look almost a little zombielike but they appeal to us in the same way we like to look at zombie makeup. I don’t think most people find these paintings erotic I think that they find them sort of challenging and that’s what makes it exciting to look at. 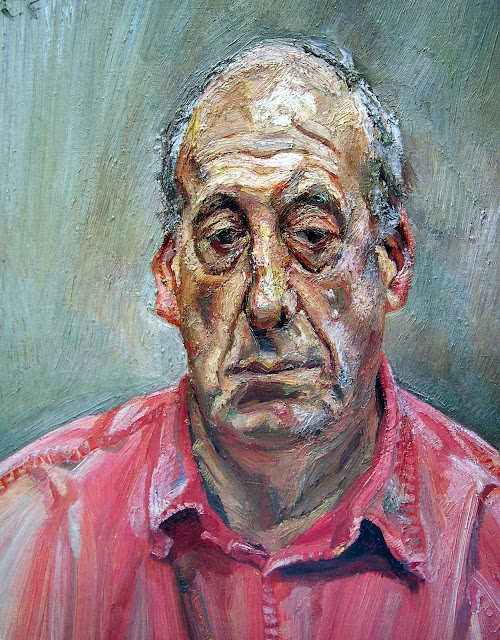 The physical texture of Freud’s paintings is also part of their appeal. I’m talking about texture. Freud uses very thick paint and he also lays it on layer after layer week after week to build up the surface of the paintings can be almost an inch thick with paint. If you were to pick up one of these paintings, even a small one, you would probably notice or note that the painting was very heavy. That’s because Freud uses a lot of paint and he also uses very dense paint. He applies the paint with hog’s hair bristle brushes. Thick paint is expensive and making art is a bit of a luxury. Although Freud’s family was upper-middle-class they weren’t necessarily wealthy, but they were wealthy and not to pay for Lucian Freud’s education at some good schools as well as to help finance his art career in the earlier days. Some things are important in terms of the context of Lucian Freud’s life, for example Freud was good friends with Francis Bacon and David Hockney as well as other artists. He is also the grandson of Sigmund Freud.

Sigmund Freud probably influence the career of his grandson in several important ways. First of all, it gave him entryway into British society. Freud’s biographers note that Freud actually felt a little bit conflicted or guilty about this because he felt that it gave him possibly a bit of an unfair advantage over other artists. Sigmund Freud’s psychological theories also seem to influence the content of Lucian Freud’s portraits of people. In a way, Lucian Freud’s paintings are a good example of cognitive dissonance, one of Sigmund Freud’s psychological theories. 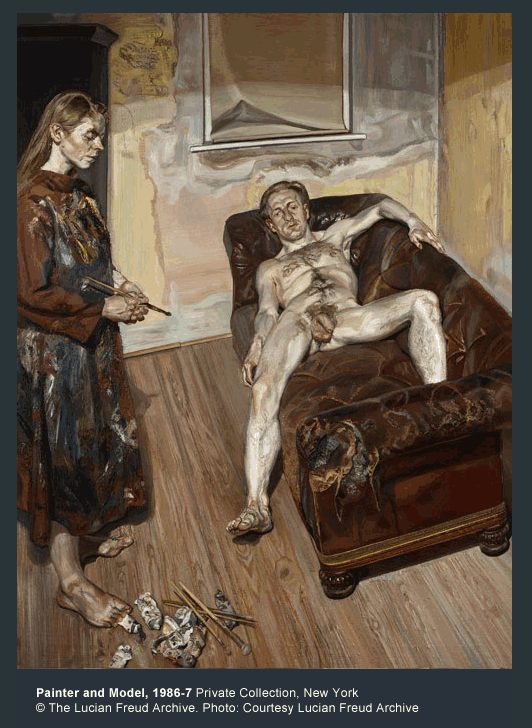 The viewer who sees Lucian Freud’s painting has the whole two opposing thoughts in their mind at one time. One is, the painting in some ways is very beautiful because of the paint texture and the colors, however, there aspects about the way Freud paints that are a bit ugly. The paintings are both aesthetic and unaesthetic. Another compelling psychological aspect is that the viewer is left trying to figure out why someone would paint the figure that way how the model actually looked how Freud interpreted the model and why were compelled to look at the paintings. 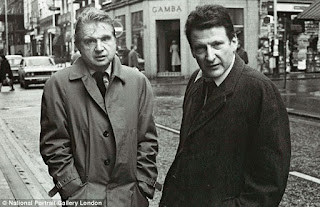 Freud’s success as a painter is linked to his pedigree and education, his legacy of being the grandson of Sigmund Freud. However, there’s also other romantic aspects of Lucian Freud’s life that probably added to his fame. Lucian Freud grew up knowing Street tough gangster kids in the 30s and 40s. He is even thought to have been linked with some gangster types who may have helped him collect on some debts from collectors. He also either cultivated a romantic attitude which complemented his sharp features in thick head of hair, but one biographer actually describes him as a bit of a sex maniac. He’s described as taking breaks from painting from a model to go into the next room and have noisy sex with a woman who would show up at his studio and then leave immediately afterwards. This is described as a pretty common state of affairs in Freud studio. We also know that he was married and divorced several times and has in excess of 10 children were more. 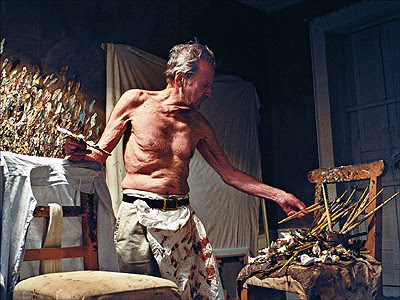 The last several decades of Freud’s life, well into his 80s, Freud was described by his biographers as being completely dedicated to painting sometimes as much as 10 to 12 hours a day. He painted standing up because sitting down was to inactive for him and his biographers note surmise that in the last two decades of his life he was pushing as hard as he could because he knew that would be the last body of work he would be able to produce before he passed away. One anecdote describes that Lucian Freud went to his doctor well into his 70s, and complained that he just didn’t feel right, the doctor responded to Freud explaining that he was an old man didn’t have the energy that a young man might have.