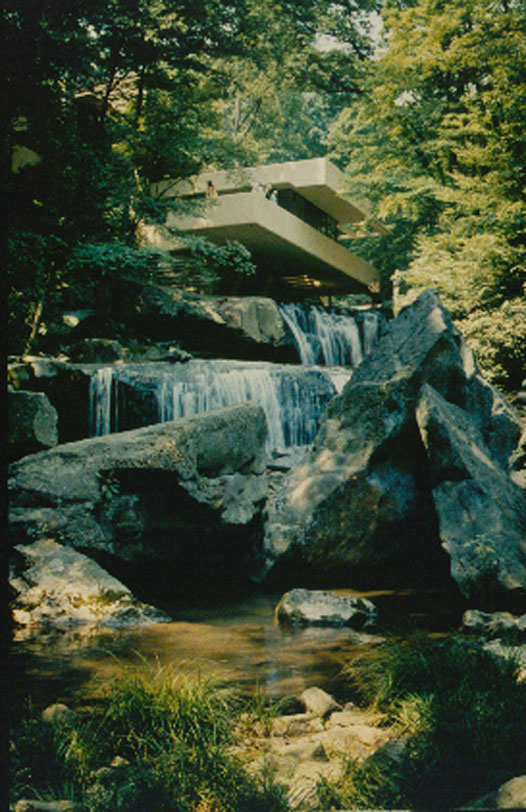 The physical qualities of Falling Water are probably the most important things for you to know about this home designed by Frank Lloyd Wright.
Starting with its location in a secluded area of Bear Run Pennsylvania, its location is over a small stream that runs underneath the house. 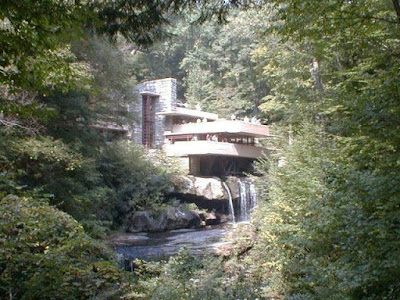 The house and its windows are not oriented to the four compass points. The building sits with each of its corners pointed towards each of the four compass points which allows for more consistent light to travel across the building and into its windows. When the house was first built, it was not surrounded with his much vegetation and old growth trees. The geography surrounding the home is different now because the trees are taller and there are many more of them. The undergrowth is also denser. 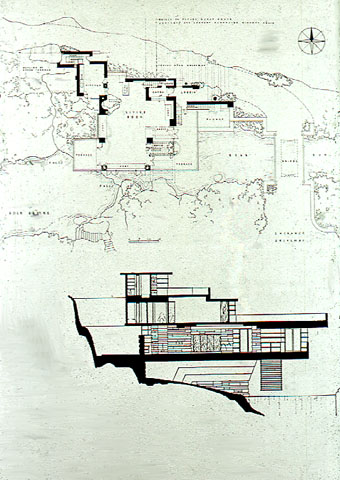 The main house, called, “falling water,” is entered into by walking across a short bridge that runs across the stream. In addition to this, there are also a series of smaller structures located on the hill above the building itself. This includes a garage, a covered walkway, and guest quarters.
All of the buildings incorporate poured concrete slabs, balconies which are cantilevered out from the main structure. 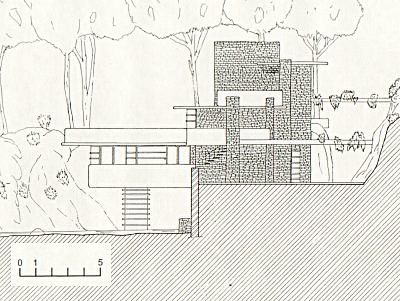 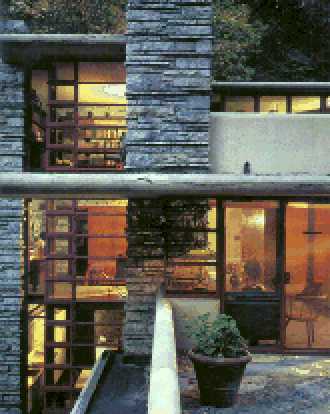 
For my complete course with videos, texts and study guides please visit:
http://art-and-art-history-academy.teachable.com/ 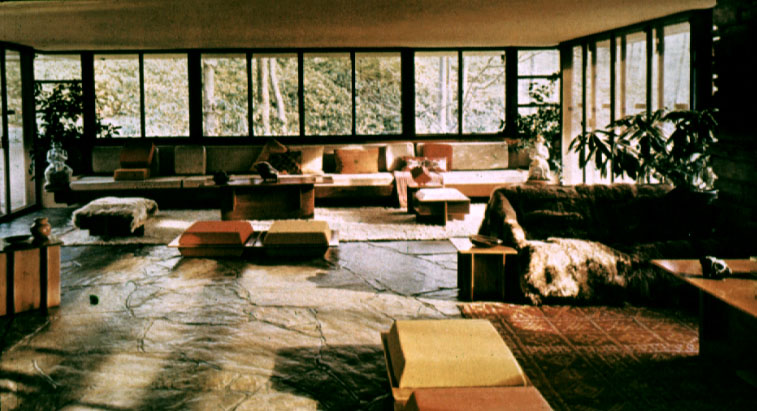 The interior rooms of the home have very low ceilings, which are inset often with indirect lighting designed by the architect himself. The furniture in many or most of the rooms was designed by the architect and is actually built into the home. In the living room the main feature is a large stone hearth placed atop a boulder that used to be the boulder on which the family sunned itself. It is in the center of the home and has a large built in metal cauldron that can be swung over the fireplace to warm wine or other liquids. However the metal is so heavy that it is fairly ineffective. 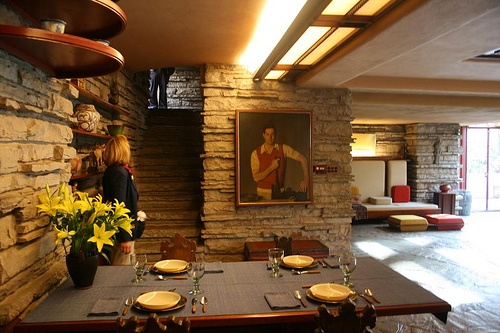 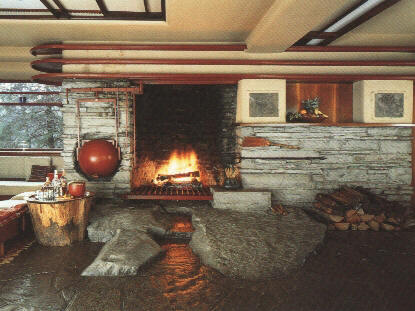 There are several stairways that wind in and out of the low ceiling interior rooms up to bedrooms that also have cantilevered balconies with windows built into the corners of the rooms. These interior bedrooms contain built in storage units that were designed originally for small yachts and small residential boats. These interior storage units save on space. 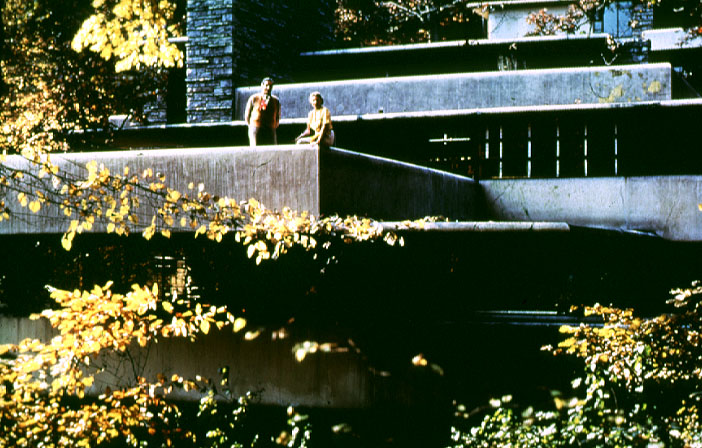 When the building was originally designed Frank Lloyd Wright probably use the wrong proportions, or at least figured out the loads and weights on the cantilevered porches incorrectly. As a result of this, the porches began to sag and in recent years a series of cables have been run through the overhanging porches in order to correct this mistake. 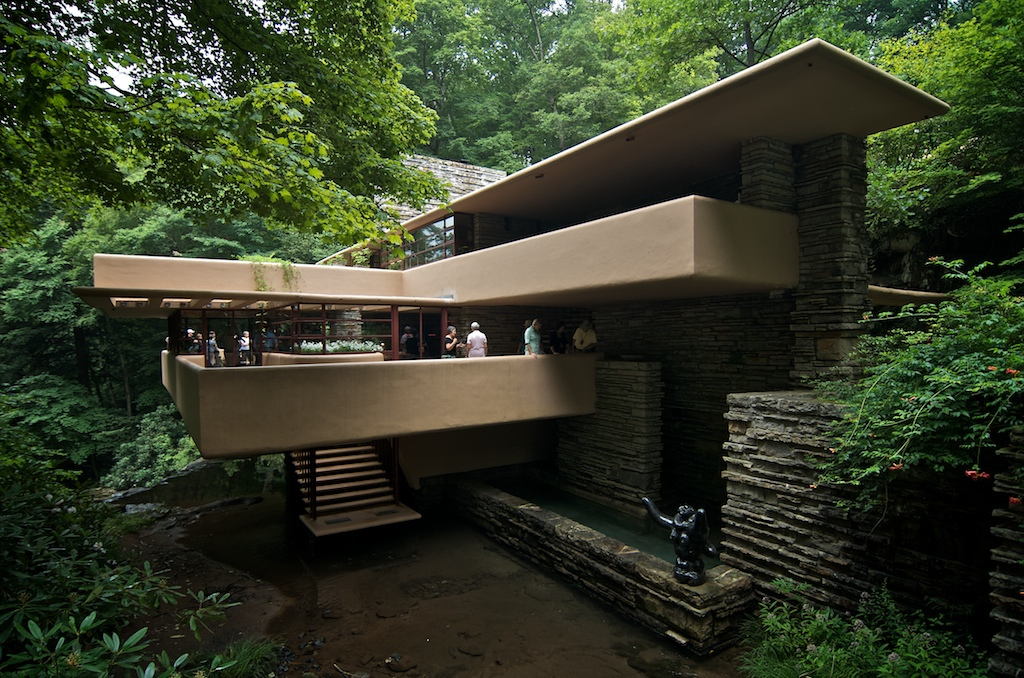 The context and design of the building are fairly complex and interesting. One of the things about Falling Water and other buildings by Frank Lloyd Wright are that she had a series of concepts in mind before he began to build his structures. Some of these main concepts that Wright incorporated into his buildings are the ideas that the building needs to be part of the environment and also very private on the interior. The use of overhanging porches is part of a way of screening the view from outside, however, the interior views provide a sense of connecting the outside environment with the inside. This is further complemented by the use of stones and masonry that is used both on the interior and exterior of the building and the stone itself is quarried locally. 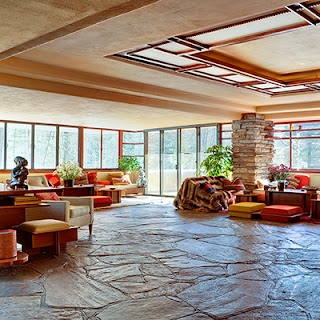 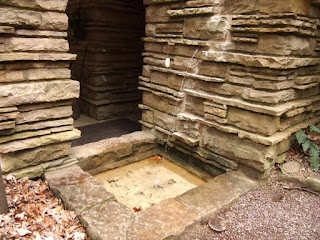 The small waterfall/stream that runs through and under the home is also accessed by a series of floating steps, today they have an additional bracing because they often get damaged by floating bits of logs and other detritus, but originally the steps, like the balconies, cantilevered and floated above the stream itself. The use of the home as a vacation home where people would go swimming in the stream is also complemented by some exterior showers built into the walls on the exterior of the house. 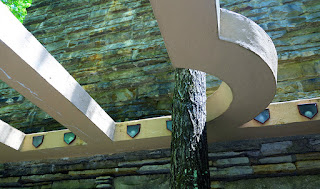 Frank Lloyd Wright, was a very dramatic person, and part of this is expressed in his ideas surrounding how the home should be used as well as how the geography was incorporated in a way that was unexpected by the patrons who ordered or commissioned him to design their home. It does carry over some concepts from his other buildings dealing with privacy provided by overhanging balconies, the use of native materials such as the stone, the handmade quality and high level of craftsmanship that was used, as well as Frank Lloyd Wright idea that the fireplace or hearth of the home should be used as the literal heart of the home itself. 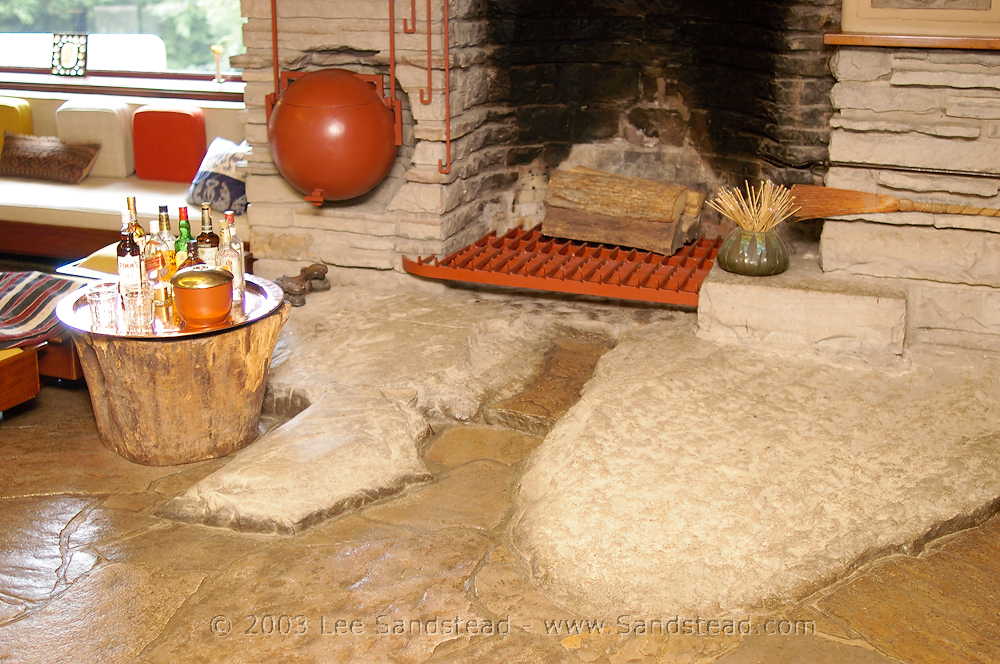 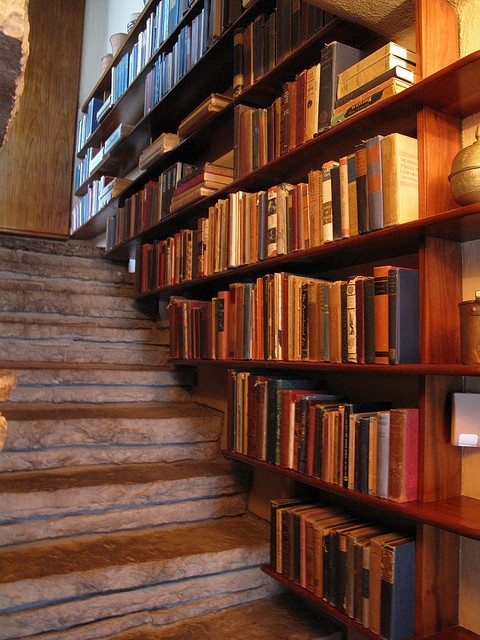 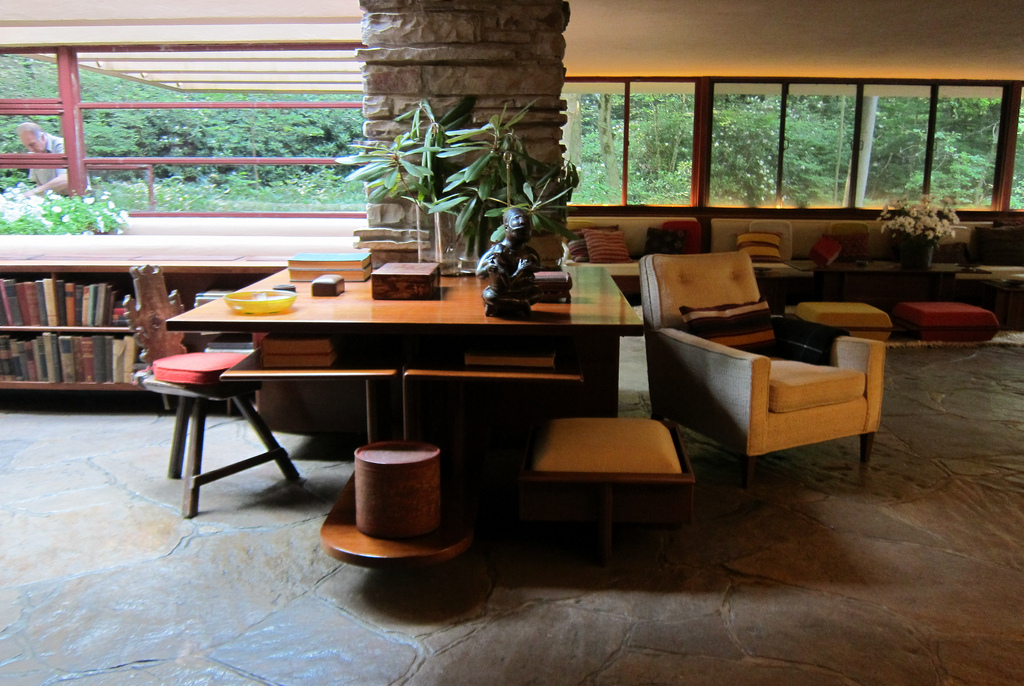 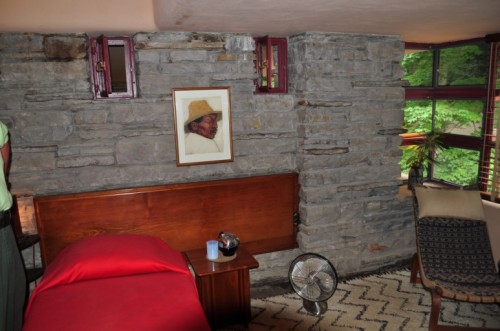 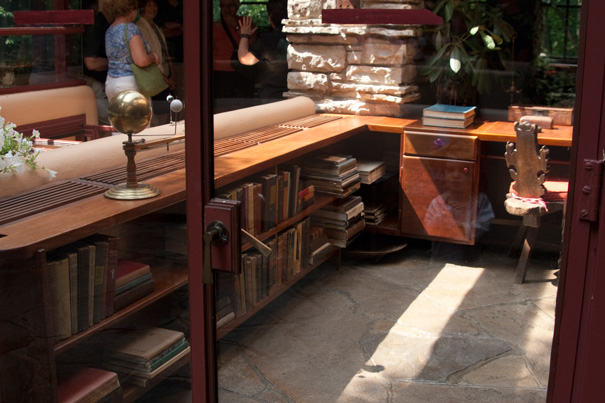 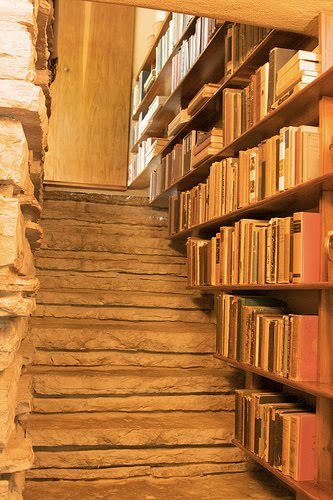 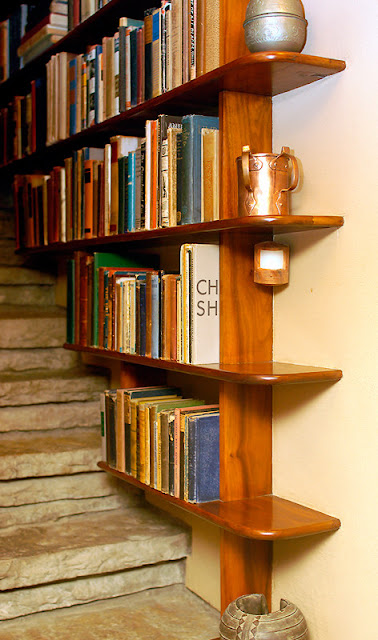 Attention to detail was also prime in Frank Lloyd Wright’s view of architecture and also expressed some of his philosophies about using natural materials. For example, Frank Lloyd Wright insisted that the masonry be created out of the native flagstone found in the area and is laid out in irregular levels and courses that were very time-consuming to create.
Frank Lloyd Wright also, unlike many architects today, felt it was important that he designed the furniture as well as even the placement of furniture and art on the interior of the structure. There are anecdotes in which Wright might visit one of his homes and replace knickknacks and art that had been moved by the owners. He even designed, or had a hand in designing, what kinds of carpets and small sculptures will be placed on the bookshelves and floors.


For my complete course with videos, texts and study guides please visit:
http://art-and-art-history-academy.teachable.com/