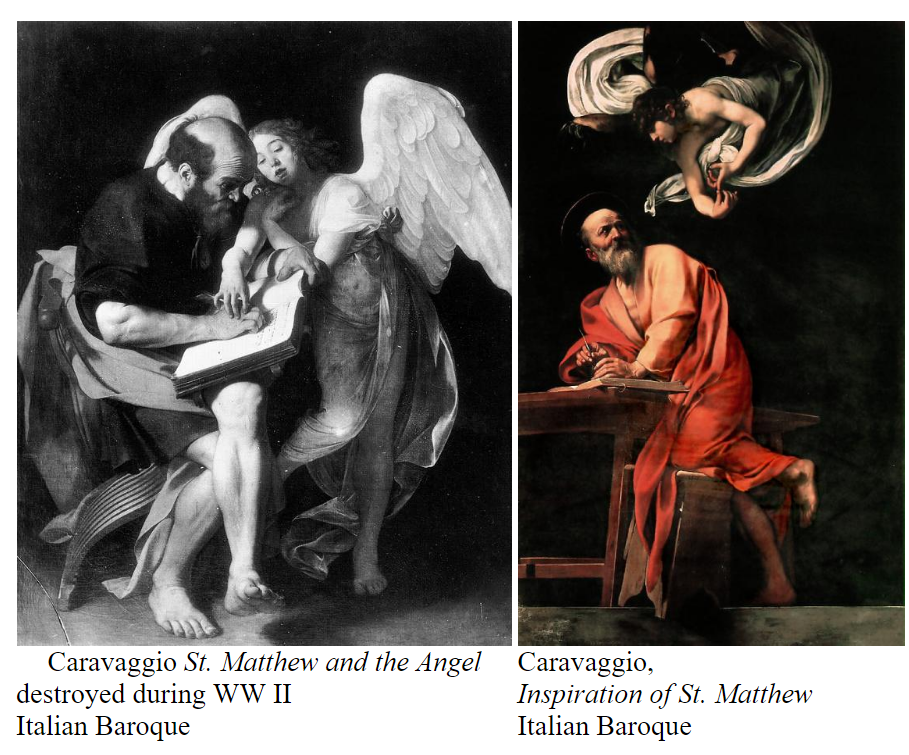 Form:  Although only a black and white reproduction survives the image entitled St. Matthew and the Angel, we know that originally would have looked very similar in color and value structure to the Inspiration of St. Matthew.

Some major differences do exist however.  The point of view is quite different in both as is the costuming and the interaction of the two figures.  In the image on the left, Matthew is bare legged, entwined with the angel in a transparent gauze like gown and his facial expression is rather dumb.  Although the viewer is placed in a vantage point from above, the viewer is still confronted with the bare feet of the saint as they project out into the foreground.  The image on the right is just the opposite in almost every way.

Iconography:  The iconography of this scene concerns itself with an image in which Matthew composes his gospel long after the death and ascension of Jesus.  Matthew is described as having received divine inspiration and guidance for his account from an angel.  Nevertheless, the angel in the left hand image is guiding Matthew's hand in a rather provocative manner.  This manner, coupled with the bare legs and befuddled almost senile expression on the saints face is what ultimately led to this image being rejected by the patrons.  Caravaggio then painted its replacement the Inspiration of St. Matthew.

Context:  It is precisely this kind of irreverence and rebellious "thumbing his nose" at the patron that both earned Caravaggio his notoriety as well as his infamous reputation. 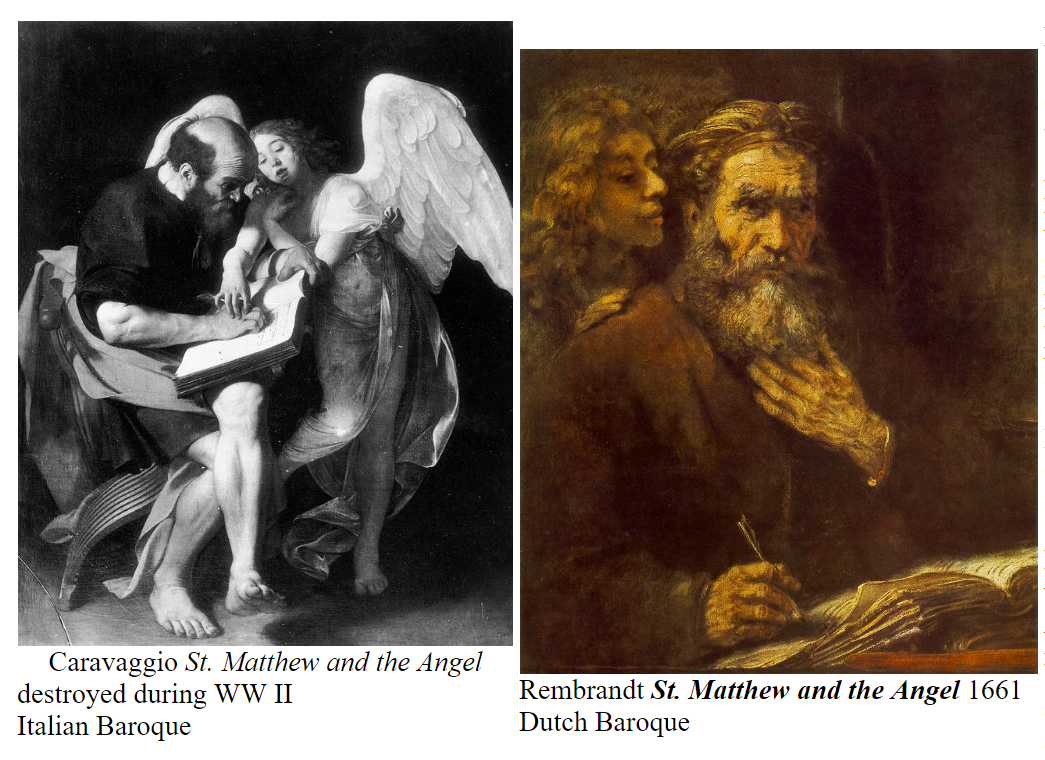 Form:  As in the last comparison only a black and white reproduction survives the image entitled St. Matthew and the Angel, we know that originally would have looked very similar in color and value structure to the the painting by Rembrandt.
Rembrandt painted his image more than 50 years after Caravaggio painted his but Rembrandt's portrait of the saint follows many of the same schema as Caravaggio.  Both use tenebrism as a way of creating a focus on St. Matthew and to heighten the drama.  In this way and for this reason, Rembrandt, and other artists who copy Caravaggio's style are often referred to as caravaggisti which literally means a follower of Caravaggio.

Iconography:  Rembrandt depicts Matthew in a similar manner to Caravaggio however, in his depiction Matthew is not as aware of the angel as in either one by Caravaggio.

Rembrandt also incorporates and element of the genre imagery in his work.  Matthew looks like one of the Jews that he might have known in Amsterdam and Rembrandt also attempts to authenticate the Persian or middle eastern quality of the image by providing Matthew with a turbine.

Context:  Many artists, including Rembrandt, Velázquez, Gentileschi and others took their cue form the works of Caravaggio and we refer to them all as Caravaggistis.