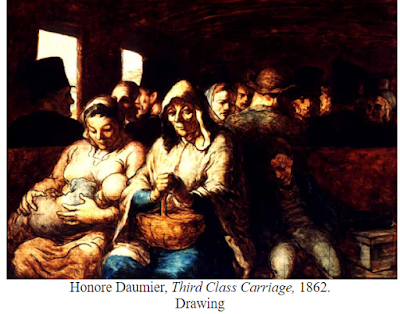 Form: These images all use reduced earthtoned palettes.  The compositions are symmetrical and stable.  The space is fairly shallow and arranged in bands with the focus of the image in the foreground.

One of the most important aspects of these images is that Daumier has created multiple copies of the same image by using a process called grid and transfer or squaring.

"Squaring" in painting, simple technique for transferring an image from one surface to another (and sometimes converting the image from one scale to another) by non mechanical means. The original work to be transferred is divided into a given number of squares; the same number of squares is then marked off-- with charcoal or some other easily removable medium--on the surface of the receiving area. The contents of each square of the original are then drawn in the corresponding square of the reproduction. The use of the grid ensures the accurate placement of images onto the reproduction.
The Egyptians used squaring at least 5,000 years ago. It has been used to transfer cartoons onto murals, to transfer preparatory drawings onto canvas paintings, and to alter the scale of any work in the same media. 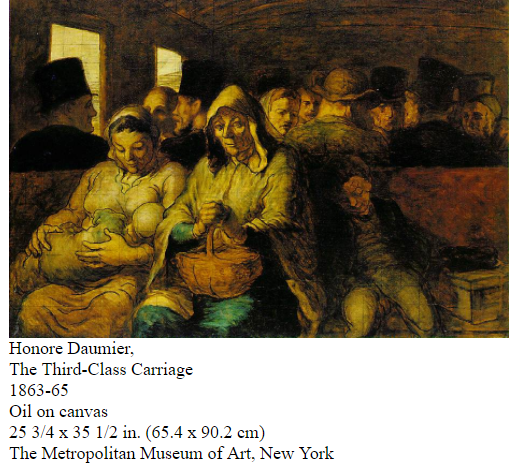 This process is important because it demonstrates the influence of mechanical reproduction (photography and printmaking) on the practice of fine art. Daumier is influenced by the technologies used to create his cartoons in the newspapers even when he makes fine art. Daumier would have used the process of "squaring" to reproduce images like this on to lithographic stones and printmaking plates.
This process was also used during the Renaissance.  Check this out:
http://www.clevelandart.org/techniques/squaring.html Daumier's work is realistic but it is still stylized in a cartoon like manner.  His portraits of everyday people are more caricatures than attempts to capture a realistic or photographic realism.

Iconography:  Daumier is a lot like Hogarth.  Even in his use of the technology of printmaking to communicate and sell his work.  The iconography of Daumier's work (like Hogarth) deals primarily with Parisian and or French culture and its social organization.  His work often deals with social injustice but often his work documents and is a commentary on the structure of French society.

Honore Daumier, a French artist, was deeply interested in people, especially the underprivileged. In Third-Class Carriage he shows us, with great compassion, a group of people on a train journey. We are especially concerned with one family group, the young mother tenderly holding her small child, the weary grandmother lost in her own thoughts, and the young boy fast asleep. The painting is done with simple power and economy of line. The hands, for example, are reduced to mere outlines but beautifully drawn. The bodies are as solid as clay, their bulk indicated by stressing the essential and avoiding the nonessential. These are not portraits of particular people but of mankind.
Hogarth's Third Class Carriage is also a commentary on the compressed and cramped existence of the French "third class" or lower class.  Even though they are doing the bulk of the work their carriage is decidedly less comfortable than the first class carriage below.  Notice also that the wealthy people in the first class carriage are not conversing or leaning against one another.  Their facial expressions are much more detached and aloof as well.  This in some ways demonstrates Daumier's empathy for the lower economic classes.  In some ways he is very Rousseau like in his egalitarianism. 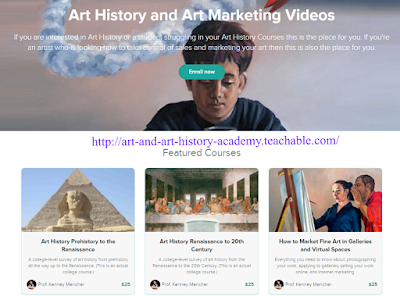 Posted by Kenney Mencher at 8:00 AM