Why is Francis Bacon so important? 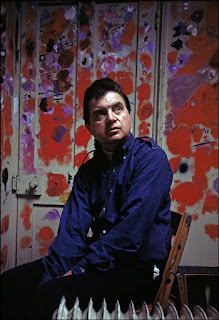 The biography of Francis Bacon is filled with bizarre anecdotes about him trying on women’s clothing when he was a kid, a film in the 1998 featured his relationship with a burglar named George Dyer fell through his studio skylight into his home and he became lovers with a guy. The guy who played James Bond plays Francis Bacon’s lover. Elements of the film and his biography are quite surreal however, when they first started exhibiting his work at one point he was rejected from exhibit for not being surreal enough. 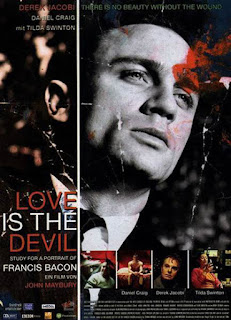 Again, context is everything and Francis Bacon can be linked to other art giants of the 20th century such as Lucian Freud and other Surrealists. The fact that he comes from the upper crust of English society probably did not hurt his career. As an upper-class educated white male (although many biographies insist he didn’t have much education as a child because he was asthmatic) his position in in wealthy English society during the 1930s and 40s Francis Bacon had access to design schools and art history. His formal education, more or less as an interior and furniture designer.

I’m sure his education provided him with enough information that he could in some ways see the art of art history and incorporate ideas from earlier periods into his work later on. Probably some of the biggest influences on him were the early surrealist movement of Dada however, it’s clear his knowledge of art history and such figures as Rembrandt as well as Edvard Munch are clearly referenced in his work. So Francis Bacon is clearly the air to a long continuous line of European artists who reference art history and re-appropriate ideas from earlier periods. 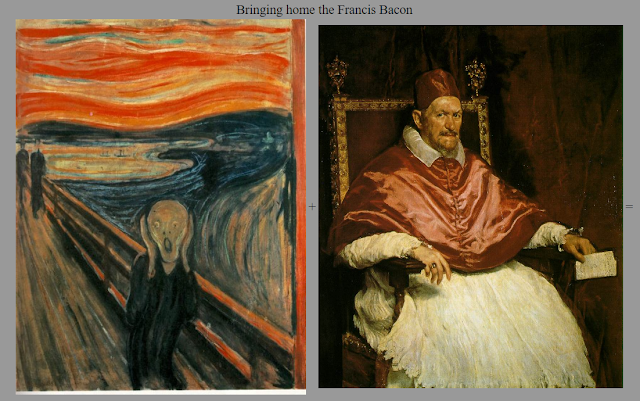 In the same way that some pop musicians “sample” earlier works and incorporate things like baselines and themes into new compositions Francis Bacon borrowed from Velasquez, Edward Munch and Rembrandt. Almost in a form of a kind of the equation in which one plus one plus one equals Francis Bacon. 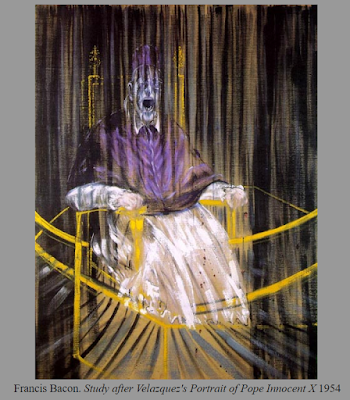 If you were to describe his work in terms of the formal qualities probably one of the most interesting and important elements in his work is that he paints on the reverse side of canvases. I learned this in watching a documentary video about him in which he described part of his process. He explains that one day she had run out of canvases and so flipped a canvas to the raw side that was on prime unfinished and he liked how the mark making he made was permanent and indelible and so he decided to continue working on raw canvas.

Today, this is caused a lot of problems for conservators and museums that hold Bacon’s work in their collections. The reason being that oil paint interacts with open weave cotton or linen canvas and has a kind of rotting effect on the canvas that the oil paint is adhered to. That’s one of the reasons why artists gesso or prepare the canvas. It keeps the canvas from rotting or interacting in a way with the oil paint in such a way that the painting will deteriorate over time. Bacon was not afraid to experiment with materials and with ideas. 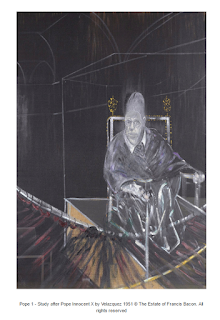 The color in Francis Bacon’s paintings are probably strongly influenced by Munch’s painting and also from other expressionist artists such as Ernst Ludwig Kirchner. These artists used color often straight from the tube in a nonlocal highly your or saturated way. The colors, and the randomness of the choices being very different from the idea of warm and cool colors used by the Impressionists who often used nonlocal color. 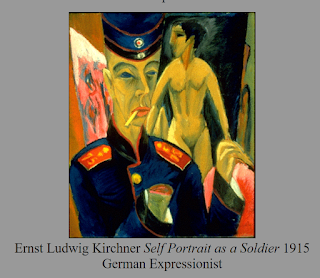 The paint texture of these reverse canvas paintings is often very thin with flight thick paint called impastos in various areas. More important than the color and the paint quality are probably his use of lines and some geometric forms. For example, in his study after Velazquez’s portrait, not only does Bacon smear the paint in vertical long stripes, he also does a similar thing to the face in which he smears the face in vertical stripes. He surrounds the figure with almost cartoonlike motion lines at the base of the figure which gives the overall composition a sense of flaring from the bottom and moving up towards the top in an explosive way. The yellow diagonal and almost horizontal lines surrounding the throne are references to the throne but Francis Bacon also used similar forms and arrows like this in many of his other paintings. Some historians have interpreted this as being taken from his training as a designer. 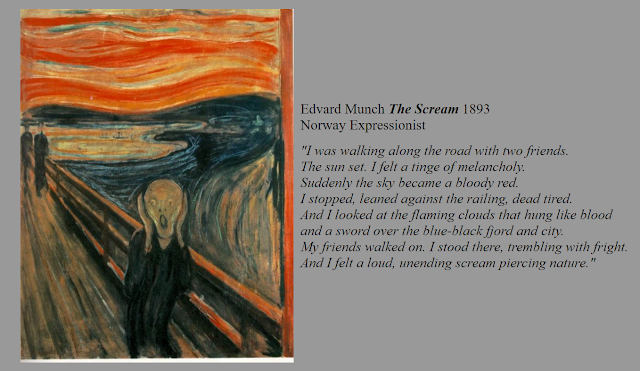 Francis Bacon is not really interested in traditional things such as the accurate portrayal of anatomy, or shading and value structure. When he uses paint, and the way he uses it, is probably closer to how the German expressionists used paint as a way to portray feelings and or emotions, especially those that are unsettling or violent. The symbols Bacon uses in many of his paintings speak to some of this unease or violence. 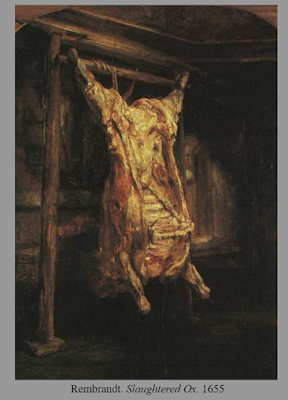 Doing an iconographic analysis of Francis Bacon’s paintings, one can see that he is clearly references art historical sources but uses the symbols in a kind of reversal or reinterpretation of them. It is very possible that Bacon is referencing his own sexuality and in particular his proclivity towards rough gay sex that included fairly violent fantasies acted out by his “rough trade” sex partners. 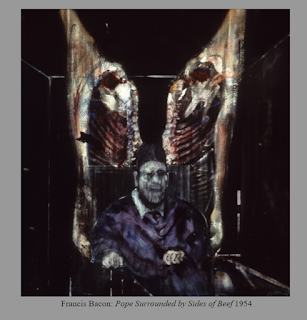 Another strong influence on his iconography and imagery is that he collected some medical journals and was very interested in 19th century scientific photographers such as Eadweard Muybridge. In one documentary Bacon talked extensively about the imagery in some 19th century dental journals that showed mouths being held open by medical instruments. This is directly referenced in the mouths in many of his paintings. In the documentary, Bacon talked about his fascination with these images and that he found the flesh of the open mouths “beautiful” and “sensuous.” 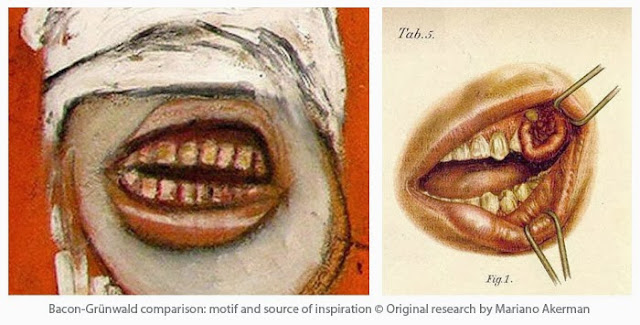 The most popular interpretations of Bacon’s series of “Pope” paintings after Velazquez are that they are an expression of the authoritarianism of the Catholic Church and possibly how the Church might view his sexual orientation and proclivities. However, he seems to have never made a definitive statement as to what he intended them to mean.
The facts are as follows:

He collected art books and medical journals that he used as reference material, he began painting his “Popes” in 1946 and stopped painting them in the in the mid-1960s and even called the series “silly.” Although he is known to own many reproductions of Velazquez’s painting of Pope Innocent, historians often comment on the fact that he did not see the painting when he visited Rome in 1954.

When you research Bacon’s work many of the scholars who write about and interpret the work often include their own “baggage” of ideas in their interpretations of the work often making connections and leaps to film references and other imagery they assume Bacon would have known. In keeping with the Dada and surrealist notions that their paintings came directly out of their own unconscious and dream state Bacon’s works are perfectly aligned in their mission however, it’s possible that the interpretations of the work were meant to be points of departure for the audience viewing them. Bacon might not have had a conscious intention of what they meant to him and what the symbols meant. 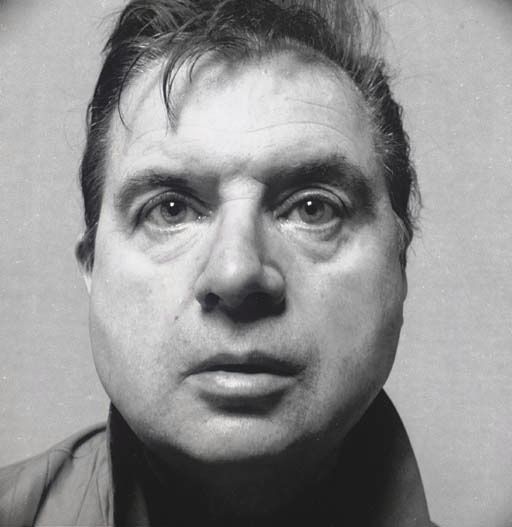 Posted by Kenney Mencher at 8:05 PM