What you need to know about the Stele of Hammurabi c.1780 Mesopotamia 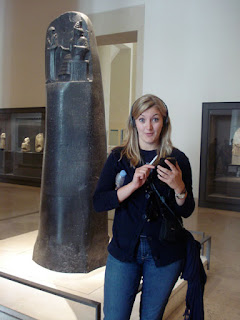 The context of this carving is probably one of the most important parts about it. This carving was a code of laws that was published in the middle of a populated area so that everyone had access to the laws involved with citizenship in the Babylonian Empire.


Probably, one of the most significant things about Babylonian culture is that by the time of Hammurabi they had already developed a highly-sophisticated form of writing called cuneiform. Cuneiform began more or less as a pictographic form of writing but at some points made the transition into an alphabet that became the standard writing system for the entire Mesopotamian world. Every city state along Tigris and Euphrates used cuneiform as a means to keep records and to track laws and events. This is despite the fact that they each had a separate dialect in terms of their spoken language.

The so-called, “Code of Hammurabi,” outlines a series of important laws and their equivalent punishments for breaking them. The majority of these laws revolve around retribution for breaking the law by paying, literally, in terms of commodities for infractions. For example, we all know the phrase, “an eye for an eye a tooth for a tooth.” However, many of the laws concern themselves specifically with equivalent values for things such as human life being equal to a certain amount of livestock to repay someone’s death warmer. Another example, if the house falls down with someone in it that was made by an architect the architect must be placed in a house and have a house all on him and kill him in return. But, the architect may also by himself out of this consequence buy providing payment to the family to exact their revenge. 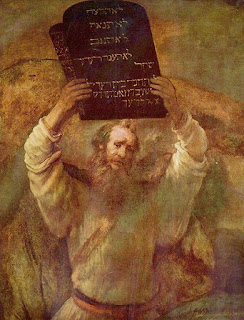 “The Code of Hammurabi,” is probably the basis for Jewish law and the 10 Commandments in a very abbreviated form. The Jewish people, who were called the Hebrews at the time, were nomadic group of people who traveled through Mesopotamia and probably adapted a shortened version of the Babylonian code as their own.

The iconography or symbols used in this are both literary and artistic. The system of writing that is used on this relief sculpture is called cuneiform and it is a pictographic writing that probably was first established in the early 3000s BCE and evolved over time into a more abbreviated type of writing that was adapted to several languages from Mesopotamia including Sumerian and Babylonian.

The sculpture at the top of the incised cuneiform writing depicts two major figures and their roles in Babylonian culture. The figure on the left represents Hammurabi. He is standing in a votive position. He is clothed in traditional kings clothing and has a beard which in this culture and many others is most likely a symbol of wisdom and leadership. Seated on a throne to the right is the God Shamash who is the God of light and enlightenment. The God is depicted as being larger than the King. If the God Shamash stood up he would be twice as tall as the standing Hammurabi to his left. The God also has a beard and has rays of light coming from his shoulders. 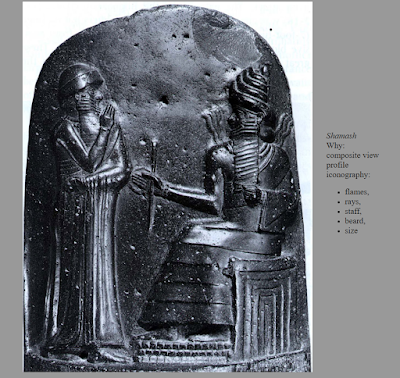 The three steps upon which the god rests his feet are iconographic of this meeting taking place on a mountain top.  The larger seated figure is the god Shamash.  (The use of size to indicate importance is referred to by Stokstad as hieratic scale.)  Both Shamash’s size and the flames surrounding his represent his larger than life divine status.  The flames surrounding his head are icons of his role as god of light or enlightenment and they symbolize power and ideas in much the same way our comic books represent figures with a lightbulb above their heads to represent a good idea.  This meeting is symbolic of Hammurabi’s divine right to rule and pass judgment.  Shamash hands over a staff of rule or rod.  This represents Hammurabi’s divine right to act as Shamash’s earthly representative.

This course is the actual content of a course I teach at an accredited college in California called Ohlone college.