St. Peters art and Architecture during the Baroque 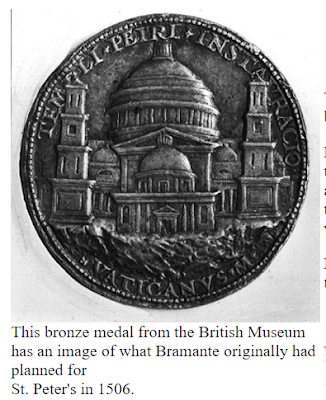 ¹ba.roque adj, often cap [F, fr. MF barroque irregularly shaped (of a pearl), fr. Pg barroco irregularly shaped pearl] (1765)
1: of, relating to, or having the characteristics of a style of artistic expression prevalent esp. in the 17th century that is marked generally by use of complex forms, bold ornamentation, and the juxtaposition of contrasting elements often conveying a sense of drama, movement, and tension
2: characterized by grotesqueness, extravagance, complexity, or flamboyance
3: irregularly shaped--used of gems -- 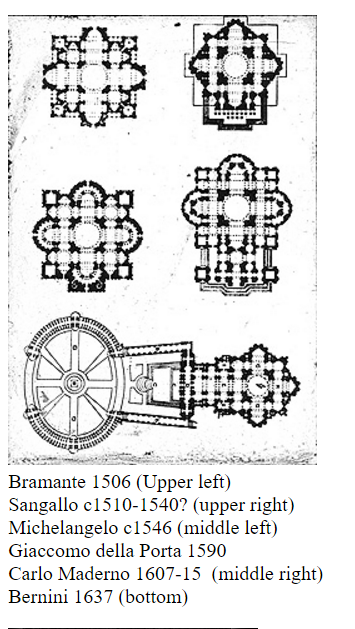 The changes in the plan of St. Peter's in Rome also exemplify the changes in style from the Renaissance to the Baroque periods.  If you look at the overall changes in form they actually become more and more ornate, complex and even theatrical in design as we move through the periods.
Form:  The Plan of St. Peter's goes through several radical changes over time.  It started as a basilican tau plan ("T" shaped) in 315 CE.   When Pope Julius ordered the original building torn down Bramante designed the building to be based on a Greek cross central plan.  Unfortunately, Bramante's design was a little unstable and Sangallo redesigned the plan.  Sangallo and Michelangelo both thickened up the walls and slightly simplified Bramante's original design.   Michelangelo also redesigned the dome and the facade of the structure.  His design was to create a more egg shaped or pointed dome than Bramante's original design because the shallow half sphere of Bramante's design was structurally a bit unstable.  Michelangelo's design was then completed by Giaccomo della Porta in 1590.


Iconography: Bramante's design is based on the conception of the ideal temple plan as laid out in Vitruvius's texts and copied by architects such as Michelangelo and Palladio.  The use of the dome falls in place with the Renaissance conception of classical forms such and makes reference to the dome on the Pantheon. 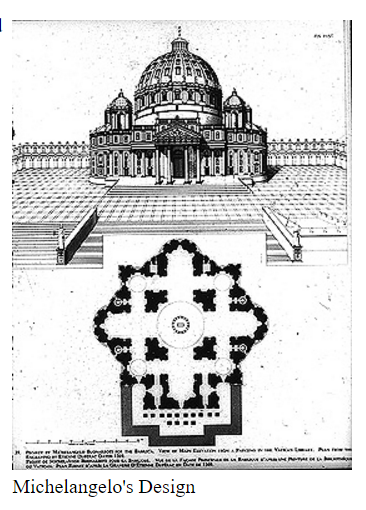 Form:  Carlo Maderno in 1607-15 didn't so much redesign the building but add to it.  Maderno lengthened the nave of the cathedral converting it from a central plan to a Latin cross basilican plan which makes the building appear as a crucifix from above.

Iconography:  Maderno's redesign is symbolic of several things.  First, it is a kind of assertion of Maderno as an artist and architect that he is remodeling the design of such greats as Bramante and Michelangelo.  It is a kind of arrogant display of power.  Almost like when gangs spray paint over the "tags" of other gangs.

The iconography is also symbolic of Catholic ideas.  The redesign is almost a rejection of the central church plan and a return to basic Christian iconography.  The Reformation had already occurred and in some ways, images of the crucifixion and of the crucifix are intrinsic to the Catholic conception of Christianity.  The Church and Christ's sacrifice, symbolized by the symbol of the crucifixion are symbolic that this is the portal to God.

Form: Bernini's arms were commissioned by Pope Alexander VII (1655-67).   Originally it was meant to be a completed ellipse that surrounded the piazza however, it was never completed.

Iconography: Bernini created the egg shaped atrium/plaza that are the "arms" of St. Peters.  Instead of using the traditional circle as the form, Bernini creates a "baroque" twist to the schema by making the shape an ellipse.

The addition of this ellipse to the overall program of buildings changes the shape of the complex as a whole.  The entire structure then appears to look like a key (which is the symbol of Peter's role in the Church) from above.  Bernini also conceived of the arms as a symbol of St. Peter's arms embracing the faithful.  See his drawing at right. 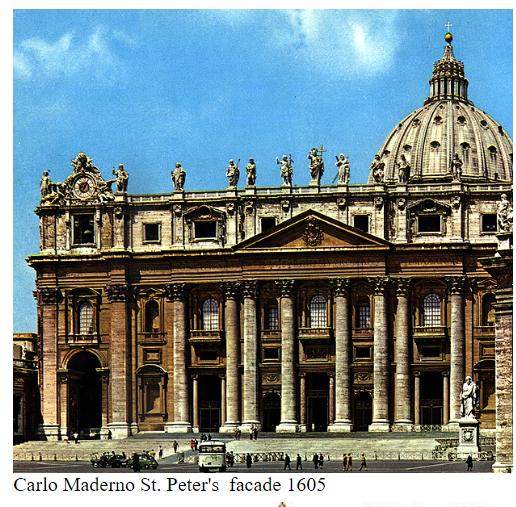 Carlo Maderno St. Peter's  facade 1605 Form:  Maderno's facade is almost the perfect example of the term "Baroque."  It is extremely complex and uses a classical vocabulary but with some very Mannerist twists.  The facade of the structure is really a combination of two facades.  The pediment above the central doors is too far down the building.  This is very similar to Palladio's design for the Church of San Giorgio Maggiore, Venice. Begun 1566.

Initially the facade appears to have a symmetrical standard formula for Corinthian order buildings but over all the combination of the forms is irregular. 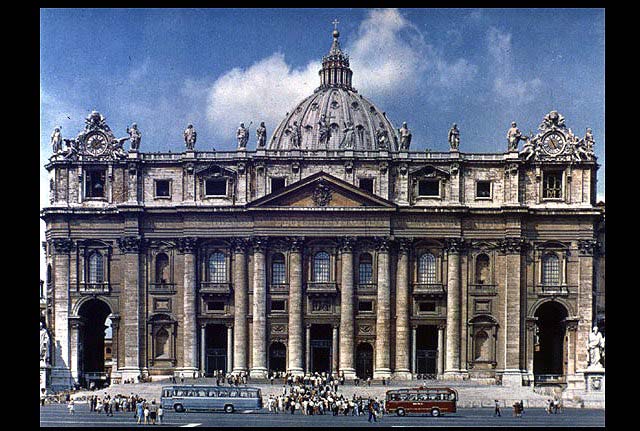 The facade is not one straight line across.  Instead the building undulates and shifts backwards and forwards in an irregular almost unpredictable pattern.  There are doubled columns combined with flattened pilasters.  The undulation of the facade is a little disorienting and creates a dramatic play of light and shadow across the facade which augmented by the facade's color which is two toned.  The top of the building is a different color than the bottom.

St. Peter's has the mark of almost every important Italian artist from the 1500's to the 1700's.  Even when the chance to redesign the over all structure or even the exterior facade, Gian Lorenzo Bernini still took it upon himself to redesign, or at least redecorate the interior of the structure.

There are many places where Bernini's has redesigned tombs, stairways and altars.  The two most important are Bernini's Baldacchino 1624-1633 or canopy located directly under the dome at the crossing and his Cathedra Petri 1656-1666 (Chair of St. Peters) located in the eastern apse. 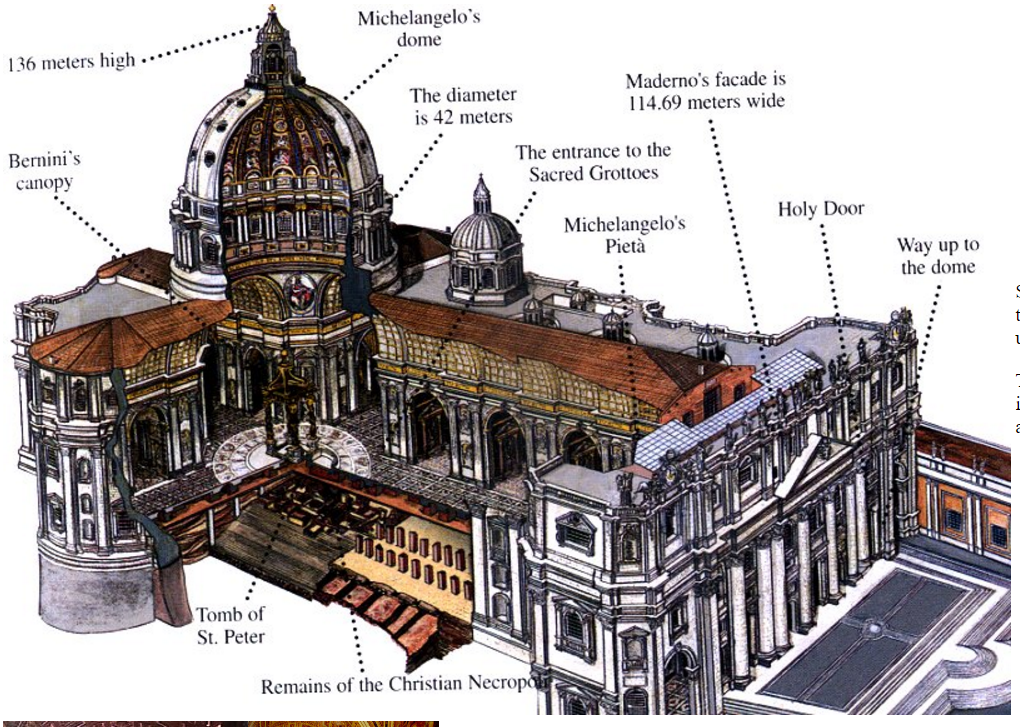 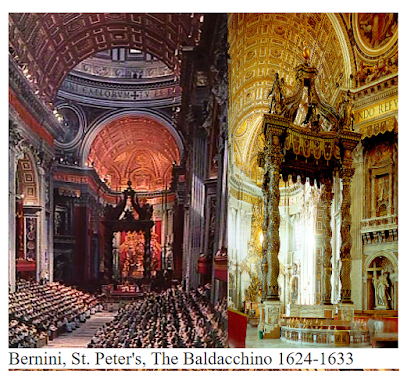 Form: According to the Brittanica,


Bernini's, famous immense gilt-bronze baldachin executed between 1624 and 1633. Its twisted columns derive from the early Christian columns that had been used in the altar screen of Old St. Peter's. Bernini's most original contribution to the final work is the upper framework of crowning volutes flanked by four angels that supports the orb and cross. The baldachin is perfectly proportioned to its setting, and one hardly realizes that it is as tall as a four-story building. Its lively outline moving upward to the triumphant crown, its dark colour heightened with burning gold, give it the character of a living organism. An unprecedented fusion of sculpture and architecture, the baldachin is the first truly Baroque monument. It ultimately formed the centre of a programmatic decoration designed by Bernini for the interior of St. Peter's.

The ornamentation and use of different materials is an excellent example of the Baroque style.  The overall form is of a tent like canopy that is cast in bronze.  The materials, bronze gilded with gold trim, is a striking and almost gaudy use of materials.  The columns are classical but literally with a "twist."  Atop the structure are banners adorned with the "Barbarini bees" (the Pope's family's coat of arms.)  Above that is a kind of diorama like scene of winged victory figures and cherubs that carry the papal crown as if they are about to descend and crown Peter. 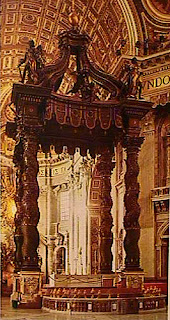 Iconography:  The size and use of precious materials is a conspicuous consumption of materials which heightens its value.  In fact, tour guides tell the story that Bernini ran out of bronze for its construction and the pope authorized him to remove and melt down the doors of the Pantheon for bronze.  The tour guides say, "Whatever the barbarians didn't destroy, the Barbarini did."

The structure was built over the crossing of the nave and transept, under the central dome and above the mortal remains of St. Peter, the first Pope.  The form of the tent probably is symbolic of the relationship of the first Jewish temple, which was in a tent, and the first Christian basilica St. Peter's. 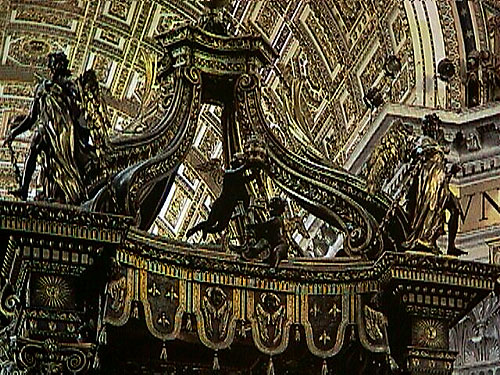 Bernini's most spectacular religious decoration is the Throne of St. Peter, or the Cathedra Petri (1657-66), a gilt-bronze cover for the medieval wooden throne (cathedra) of the pope. Bernini's task was not only to make a decorative cover for the chair but also to create a meaningful goal in the apse of St. Peter's for the pilgrim's journey through the great church. The seat is seemingly supported by four imposing bronze figures representing theological doctors of the early church: Saints Ambrose, Athanasius, John Chrysostom, and Augustine. Above, a golden glory of angels on clouds and rays of light emanates from the Dove of the Holy Spirit, which is painted on an oval window. The cathedra was produced about the same time as the piazza, and the contrast between these two works shows Bernini's versatility. Both works were done for the Chigi pope, Alexander VII (1655-67), who was one of Bernini's greatest patrons. The tomb that Bernini designed for Alexander VII (1671-78; St. Peter's) was largely executed by his pupils.

Notice how this is very similar in its use of Baroque forms and materials to the Baldachino above.  The work is a multi media work of art.  The chair is bronze, the clouds and cherubs are made out of stucco and or plaster that has been gilded with gold and the rays of light bursting from the stain glass window are wooden rods coated with gold leaf.  Even the use of the stain glass window is part of Bernini's use of dramatic lighting which may have been influenced by the use of dramatic lighting in some paintings and possibly even the opera.  Beneath the chair and the figures of the saints is the altar which is made out of different colored marbles and granites.  In the Renaissance period, this eclectic use of materials would have been considered anti classical and too ornate, however, during the Baroque period, heightened drama and ornamentation is commonplace.

pi.las.ter n [MF pilastre, fr. It pilastro] (1575): an upright architectural member that is rectangular in plan and is structurally a pier but architecturally treated as a column and that usu. projects a third of its width or less from the wall
Posted by Kenney Mencher at 3:00 AM