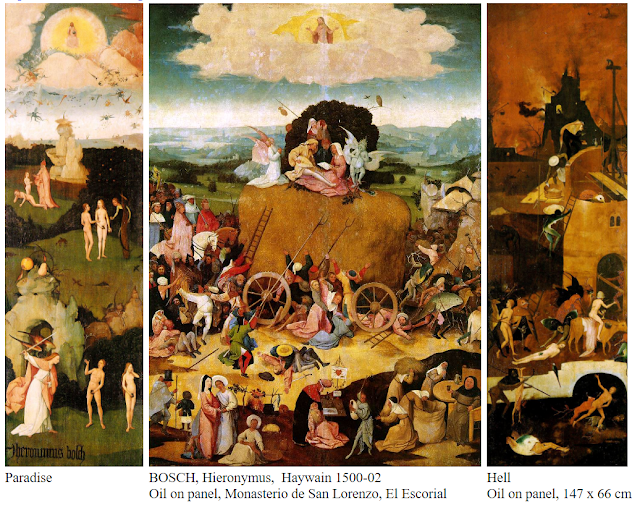 Context: The subject of sin and its punishments was central to all of Bosch's art. A famous triptych, The Haywain, contains a progression of sin, from Eden to hell, across its panels. In the central panel sin is represented through the metaphor of a large wagonload of hay for which a greedy world grasps. All the while, the wagon is being pulled by demons towards the right panel - which shows one of Bosch's earliest depictions of hell.

Get all the videos, and etext and study guides for $50http://art-and-art-history-academy.usefedora.com/ 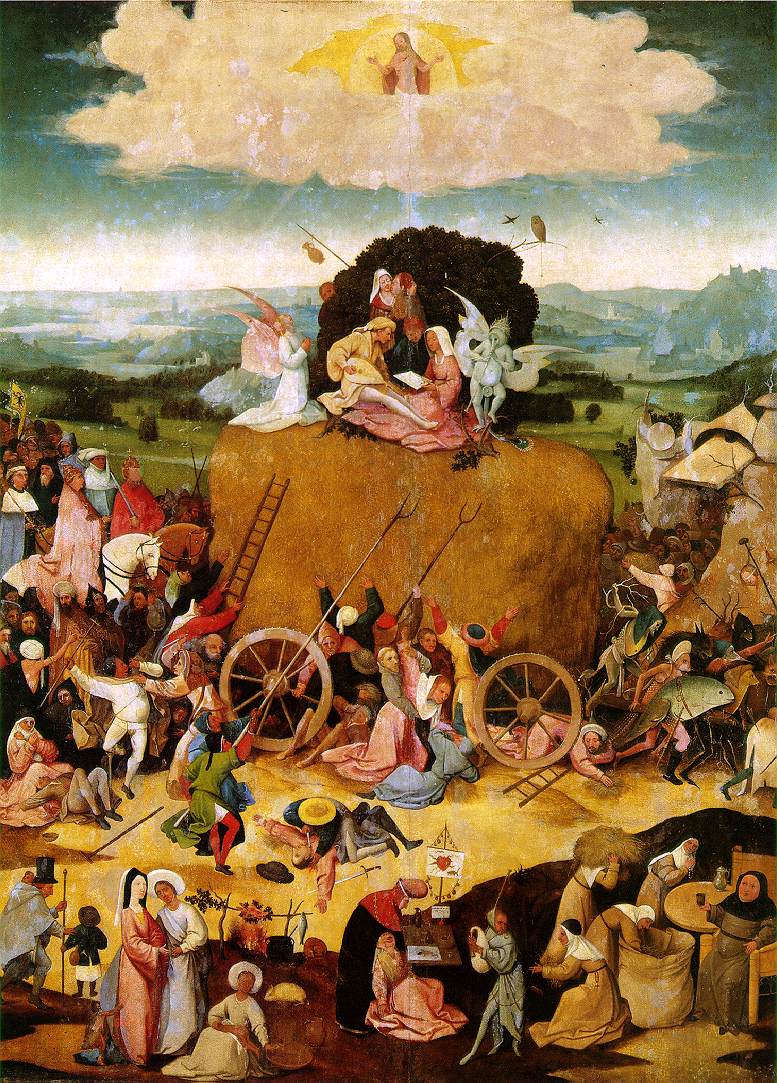 Form: Interestingly enough, Bosch again is collaging together elements from images by Giotto in his Last Judgment and Masaccio's Expulsion as well as various elements and compositional devices one might find in the Tympanum of Gothic and Romanesque Churches such as those found at Autun.

In the sky we see an image of God almost as if he is in a Last Judgement scene. The composition is very similar to Giotto's Last Judgment. The arrangement and scale of the angels or possibly even some demons is in a semi- circular form as in Giotto's.

Beneath, in the garden, we the arrangement of the figures in this continuous narrative scene is based on various standard compositions for each story. For example, the creation of Eve uses the same poses as Michelangelo does about ten years later in his Sistine Chapel panel.

Iconography: The arrangement of this panel is hierarchical. The scene at the top, may represent creation but the weird bug like demons grouped at the bottom coupled with the angels who are higher up in the picture plane, may indicate that this is the fall of the angels which is echoed by Adam's expulsion at the very bottom. An interesting, Catholic icon is represented by God the father as he pulls Eve from Adam's rib. God is wearing the papal crown.

Form: The composition of the center scene is fairly symmetrical. The hay wagon that sits in the center of the image creates the bottom of pyramidal shape that is completed by the figure who sit atop the wagon and God in heaven who looks over the scene.

Iconography: The overall scene is one that represents our unavoidable journey to damnation. It is a bit pessimistic.

Atop the Hay wagon, angels pray for us and demons also vie for our attention. A vessel, possibly representing the holy vessel is atop a pike, while opposite this is an owl, representing knowledge and death, sits atop another branch surrounded by blackbirds (death?).

Below the wagon are scenes of chaos, murder, lust and avarice. Basically all the seven deadly sins are represented in one guise or another and even the clergy are not immune to gluttony in the lower right hand corner.

Get all the videos, and etext and study guides for $50http://art-and-art-history-academy.usefedora.com/
Posted by Kenney Mencher at 10:22 PM