The last couple of years, I’ve been doing some studies of art historical artifacts that aren’t paintings and drawings. I found that in the way that I looked very closely at the paintings that I have studied, such as by the old Masters like Velasquez, I learned a lot by copying their work. So I decided to apply the same kind of thinking to some prehistoric art as well as other pieces that I really love such as ancient Greek art. So I filled up a couple of sketchbooks with things that I was looking at and I thought that I would share one here. 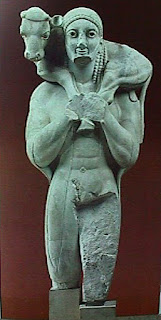 For example, Artifacts from The Acropolis of Athens, is a study of a couple of sculptures that I was familiar with from teaching survey level art history but always wondered about the context in which they were found. I attended some lectures at Stanford and one of the things that I learned was that at the top of the Acropolis was a sort of burial ground for sacred artifacts that were destroyed during the wars on Athens. When Pericles and the Athenians around for 450 BCE started to clean up and restore the Acropolis, one of the major projects was the rebuilding of the Parthenon, they buried in of reverential way many of the great statues and statues of gods and goddesses that had been vandalized.

In subsequent excavations of the graveyards and of the Acropolis they unearthed many broken statues. One of the ones that they unearthed that they’re not sure if it matches with its base is the sculpture called “The Moscophoros” a.k.a. “The Calf Bearer.” 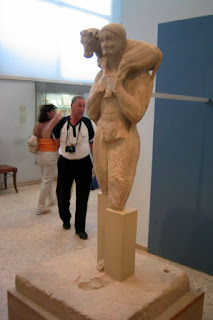 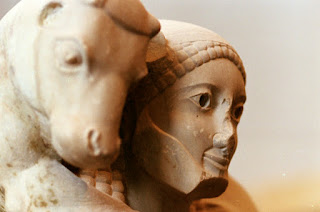 Form:  Like the earlier Kouros from the Metropolitan, this sculpture possess the archaic smile, would have been polychromed and is stylized in a orientalizing fashion.  Unlike the Kouros the is figure probably had precious stones placed in the eyes and the beard and clothing would indicate that this it is an attempt at a more naturalistic representation of a middle aged or older male figure.  The calf the sculpture holds is very realistic and the naturalistic representation of it is somewhat similar to the Vapheio cups.  The base of the sculpture is inscribed. 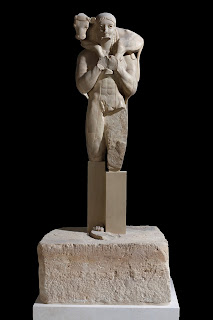 Iconography:   The inscription is from an individual named Rhonbos who dedicates the statue to Athena.  Gardner suggests that this sculpture's clothing is an invention of the artist and does not represent accurately the clothing of the times but is probably meant to dignify the sculpture in some way.  The beard is probably meant as an icon of age and therefore wisdom.
Context: We cannot fully explain what the meaning or function of these kouroi(plural for kouros and kore), however, the inscription on this sculpture and the fact that it was located in the rubble of the Acropolis (it was used as land fill) indicates that it was probably a sculpture gifted to the religious complex and was used as a votive figure.  It is also likely that Rhonbos was an important individual, or at the very least a wealthy one who in being a patron also raised his own status somewhat.