Get all the videos, and etext and study guides for $20
http://art-and-art-history-academy.usefedora.com/
This altar is a perfect example of how altars looked and were made during the early Renaissance or some art historians refer to it as the late Gothic.
Physically, it is very similar to several other altarpieces you’ll be looking at during this period. For example, Giotto’s altar as well as Cimabue's.  It shares many of the same qualities that both the artist Giotto and Cimabue incorporated into their altarpieces. It is symmetrical, meaning Mary is in the center of the image and flanked by important characters who are important to Catholicism and Christianity in general. It incorporates gold-leaf as its background as well as using tempera paint which is made from a yolk and minerals and this is called egg tempera paint. It is painted on wood and is extremely large in this case it is 7 feet tall by 13 feet long.
In terms of its style, this altarpiece and the depiction of the figures in it incorporate many of the same qualities from earlier periods such as the Byzantine period and the late Gothic periods. The faces on most of the characters share in a similar quality to Giotto attention of the ways paintings and depictions of the human form. First of all, the anatomy of the faces are typically Byzantine or late Gothic. The nose is a little too long and the eyes are a little too far up in the forehead. The gestures and anatomy of the figures are a little awkward and unnaturalistic. Space is primarily constructed by using what’s called intuitive perspective, stacking the figures up as if they are standing on bleachers or steps, which is called vertical perspective and a little bit of size scale differences. If you look at the throne on which the Virgin Mary is seated, you will see that the orthogonals or lines that lead into the background almost seem to be using one point perspective but if you trace the lines out they would be incorrect in terms of linear one-point perspective. Remember that linear perspective does not get used until around the 1420s.

The drapery, or clothing, of each of the figures is closer in it’s rendering to painters such as Giotto in his "Ognisanti Altar." Also, similarly to Giotto, Duccio also has some of the figures looking at the Virgin Mary. Duccio also uses the same hieratic scale that Giotto and Cimabue use, meaning that the figures of the Virgin Mary and Jesus seated on her lap are larger than the less important figures and are also placed in the center of the composition.

On the reverse side of the altarpiece are scenes from the life and times of Jesus and his accomplishments almost arranged as if it’s a comic book. The scenes incorporate the same types of stylistic elements as the front of the altar, for example the use of intuitive perspective, vertical perspective, and even light and shadow to some degree. However, unlike Giotto’s painting it is very hard to locate a single light source in this painting and therefore we cannot say that it exhibits very much chiaroscuro.

In terms of the symbols or iconography used in this painting they are very similar to many of the pieces by Pisano, Cimabue, and Giotto. On the front part of the altar is a clear depiction of the Virgin Mary surrounded by a series of Saints and important religious figures that serve to frame and amplify the importance of the Virgin Mary and Jesus. The fact that the Virgin Mary and Jesus are larger than everyone else and dressed in Royal colors such as purple and blue indicate their importance. Another thing that amplifies the importance is that some of the figures are looking At the Virgin Mary and Jesus seated on the throne. As an earlier Romanesque examples as well as in Giotto and Cimabue the “Throne of Wisdom,” are used as the center of this image. The use of expensive materials such as goldleaf and blue and red pigments made from semiprecious stones such as lapis lazuli also served to heighten the importance of the central figure.
On the reverse side of this altarpiece, sometimes referred to as the verso, there are several important scenes from the life and times of Jesus that are very similar to other scenes from other artists such as Pisano, Giotto, and Cimabue.
The scenes that parallel the other artists use of similar iconography include, “The Last Supper,” “Christ entering Jerusalem,” and various others. The small panel in the lower left-hand side that depicts “Christ Entering Jerusalem,” is probably the most important one because in this instance you could compare it to Giotto’s fresco of the same name. However, in comparison, Duccio does not have the same command of intuitive perspective that Giotto does and his spaces less convincing than Giotto’s painting of the same subject. Included in this are the ways in which things such as humanistic gesture and created. 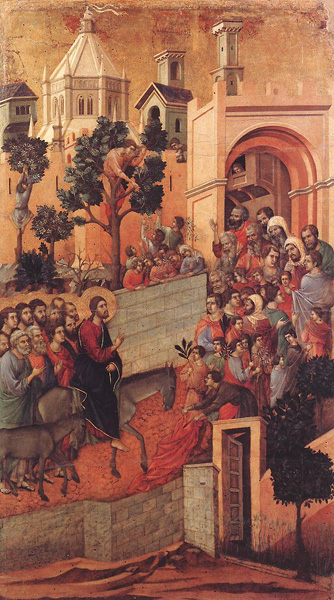 The Scene of Christ Entering Jerusalem, contains all of the basic elements that Giotto’s painting has in terms of its iconography, Jesus is entering Jerusalem riding on a donkey and accompanied by his disciples. One figure is throwing a down in front of the donkey as if it is a carpet, children are in the trees throwing down palm branches to keep the dust down on the road and to honor Jesus’s entry into Jerusalem and we also see the town walls itself in both images. Hieratic scale is used to show the importance of the main figures in Duccio’s painting however in Giotto’s, (On the right) all the figures are roughly about the same size and the spaces were unified.
Here is the Bible passage that both are based on.
Matthew Chapter 21

1
When they drew near Jerusalem and came to Bethphage on the Mount of Olives, Jesus sent two disciples,
2
saying to them, "Go into the village opposite you, and immediately you will find an ass tethered, and a colt with her. Untie them and bring them here to me.
3
And if anyone should say anything to you, reply, 'The master has need of them.' Then he will send them at once."
4
This happened so that what had been spoken through the prophet might be fulfilled:
5
"Say to daughter Zion, 'Behold, your king comes to you, meek and riding on an ass, and on a colt, the foal of a beast of burden.'"
6
The disciples went and did as Jesus had ordered them.
7
They brought the ass and the colt and laid their cloaks over them, and he sat upon them.
8
The very large crowd spread their cloaks on the road, while others cut branches from the trees and strewed them on the road.
9
The crowds preceding him and those following kept crying out and saying: "Hosanna to the Son of David; blessed is he who comes in the name of the Lord; hosanna in the highest."
10
And when he entered Jerusalem the whole city was shaken and asked, "Who is this?"
11     And the crowds replied, "This is Jesus the prophet, from Nazareth in Galilee."

This painting is that it was made originally for Cathedral in Siena Italy in 1308 and was commissioned for about 3000 gold florins, which according to the records is the highest paid amount for any painting up to that time. When the piece was unveiled, it was a major civic event in 1311 and many of the town’s people showed up to the church and also celebrated with music and feasting for three days. Alms and charity were given out to the poor during this event. Inscribed on the altar was the following,
“HOLY MOTHER OF GOD BESTOW PEACE ON SIENA AND SALVATION ON DUCCIO WHO PAINTED THEE.”
Get all the videos, and etext and study guides for $20
http://art-and-art-history-academy.usefedora.com/
Posted by Kenney Mencher at 6:08 PM