I'm looking for other artists have the punch that other powerful homoerotic artists have.  There's a lot to see in his work and a lot to enjoy. 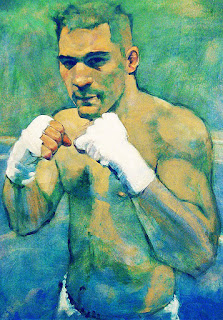 I think if you look at this work on the left you'll see that he is using what artists referred to as nonlocal color. What I mean by this is he's using colors that you ordinarily wouldn't expect to find places such as the shadowing skin. Notice the blues that are used.  He really seems to have a handle on how colors relate to one another. Of course there's another part of his work that has to do with the content matter. He does do some other things and if you look at his other website you'll see that he has a range of work that would appeal to almost anybody. And I think this is a great quality to be able to appeal to a larger audience.

However, as I've chosen here boxers, are manly, muscular, and all of power.  The faces of his men are bruised, and black  eyes and are clearly strongmen.  This kind of appeals to me in a kind of Fight Club kind of way. 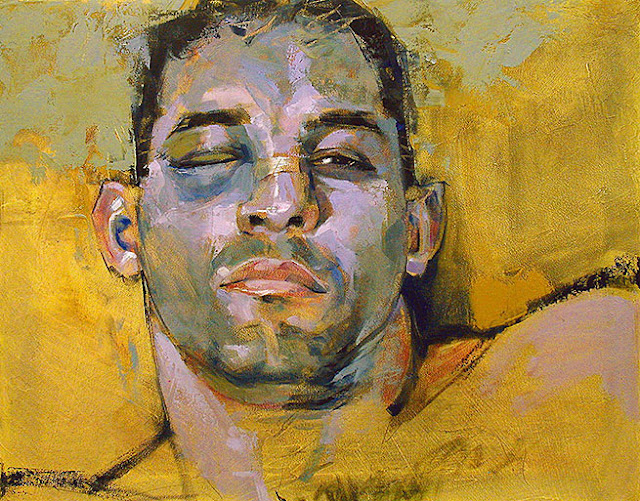 He also does do some other things that one could see as fashion or at least Tom Ford kind handsome men. 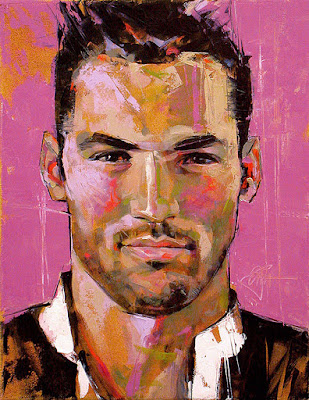 They in which he render faces is both powerful and handsome.  He seems to understand what a macho man looks like. I love the chiseled appearance of the jaw line and sculpted appearance of the lips and brow line. The use of orange and purple and peach eenhance this image and give it a power that leaps off the canvas.