There have been several variations on the biblical theme of David versus Goliath portrayed in both painting and sculpture before Gianlorenzo Bernini produced his version for the nephew of Pope Paul V in 1623. True to Baroque style, Bernini captured the character of David so full of energy and motion, the viewer is immediately drawn into the action. David is shown so involved in the movement of battle that the viewer feels compelled to get out of David's way, lest they themselves might be felled by the fatal stone about to be unleashed (Stokstad 758). This type of extreme motion is common to Bernini's, and most all Baroque sculpture.
Carved entirely in smoothly polished white marble and standing a life size 5 foot seven inches tall, Bernini's David is currently housed in the Galleria Borghese in Rome, Italy. It portrays a male figure, mostly nude, except for some loosely draped robes that appear to be falling from the figures body, a sling used as a weapon being drawn from the rear-side of the figure, and a small pouch slung over the left shoulder. The figure is wearing no armor, helmet, shoes or other materials suggesting he is a professional soldier. The figure is standing over what seems to be a warrior's armor & robes. A look of steely determination is portrayed on the character's face, and every muscle looks tautly drawn in the middle of strenuous physical action.
Though the symbolism may not be obvious to some, Bernini's portrayal of the heroic David is every bit as iconographic as many other Italian works, such as Giotto's Last Judgement (Arena Chapel, Padua. 1305) or Augustus of Prima Porta (Musei Vaticani, Rome. 100 C.E.). The fact that David is shown barefoot and nearly naked while standing over the finery of a warrior may suggest that the armor is not what makes David strong, but his unswerving faith in both God and himself. The falling drapery modestly hiding David's nakedness might lead the viewer to believe that since this work was produced for the nephew of Pope Paul V, that this sculpture was truly intended for the depiction of a well known biblical story. It was likely not intended as a beard for titillation or an excuse to look at nudes under the guise of fine art. The fact that Bernini himself looked remarkably like the work he created is likely no mistake or coincidence. Many artists of this period would put themselves in their work, and Bernini was no exception. This may signify that he felt empowered by portraying himself as an underdog triumphing over a particularly difficult work of art in it's completion. This work is considered a breakthrough in its composition and form, as it directly engages the viewer by its powerful depiction of humanistic motion. The depiction of actual muscle strain in the figure as well as the strain shown on the face may also portray the intensity of the artist's exhausting input into the sculpture itself.
Compared to other sculptures of David portrayed by Donatello and Michelangelo, Bernini shows a far more natural depiction of David in form and structure. Bernini does, however, portray David as a much older person than the other artists, as well as how the character is described in the Bible. David's actual age is estimated at around thirteen years of age at the time of his triumph over Goliath. Donatello portrays David as a young teen of about the age of thirteen, and Michelangelo portrays him a little older at maybe seventeen to twenty years old. Bernini shows a more mature David that appears to be somewhere between twenty and thirty years old. This was likely no accident, as Bernini seems to be adding his own features to the figure. As he was far older than a young teen when the sculpture was produced, if he portrayed himself as thirteen years old on his David, nobody would likely recognize the informal self portrait included on the work. Donatello puts his David (Museo Nazionale del Borgello, Florence. 1428) in a fanciful garden hat, slouching almost playfully and Michelangelo shows his David (Galleria dell'Accademia - originally in the Palazzo Vecchio, Florence. 1504) merely standing still and gazing into the distance in the nude. Bernini portrays David as a man of action with robes flying off his body from the extreme nature of his movement, expressing the strength, power and fury of his action in every part of his body and face.
Most Baroque artworks that emerged at the time of Bernini's David show far more action, drama and movement that most previous works. This was a time of extreme social change, and works such as this were merely a reflection of the struggle and social anxiety of the times. Bernini would come to produce many other dramatic sculptures that helped define the Baroque era. As this was one of the most recognized and famous, it likely set the stage for him as well as others to take sculptural art to a new level of 'high drama' during the Baroque period in Europe.

Document converted to HTML by Jeff Gross on July 27, 2001


The context of The Ecstasy of St. Theresa exemplifies Baroque art because it is considered to be Gianlorenzo Bernini's most controversial and beautiful sculptures.  The Baroque movement "was encouraged by the Catholic Church, the most important patron of the arts at that time, as a return to tradition and spirituality" (Artcylcopedia.com); however, Gianlorenzo Bernini depicts St. Theresa in the state of spiritual and sexual ecstasy.  Her neck is flung back, eyes are closed, mouth partially open, telling of her elation. Although only her face, hands, and bare feet are visible, the bends and folds of her garment reveal a passionate body beneath in her moment of climax. Never before had a Saint been depicted in the state of sexual ecstasy, yet St. Theresa's autobiography allowed Gianlorenzo Bernini to create such a controversial piece of work.  Looking now at the other figure in this sculpture, the angel's face is thought, by many, to be the most beautiful face ever created.  The face is perfectly symmetrical; each feature is perfectly positioned.  The eyes are aligned, the nose has a perfect slant, and the lips are just the right fullness.  Gianlorenzo Bernini balances perfect beauty and sexual ecstasy to achieve the spirit of Baroque art.
Created between 1645-1652, Gianlorenzo Bernini's The Ecstasy of St. Theresa is one of the most talked about sculptures in history.  "The religious sculptures he did from the 1640s on were perhaps the last flourish of great Christian art" (Economist, 87).  In terms of its form, The Ecstasy of St. Theresa is made of different materials and puts a spin on classicism. The iconography of The Ecstasy of St. Theresa is very Baroque because it depicts the most dramatic point in the saint's life and caters to the notion that God equals light.  In terms of context, the sculpture is one of Gianlorenzo Bernini's most controversial and beautiful works of art. Gianlorenzo Bernini's stunning masterpiece, The Ecstasy of St. Theresa, epitomizes the high drama of 17th century Baroque art.
Works Cited:
"Artists by Movement: The Baroque Era." Artcyclopedia.com.
Baroque, in art and architecture. The Columbia Encyclopedia, Sixth Edition.
Economist. 09/06/98, Vol. 349 Issue 8087, p87, 2/3p, 1bw.
The NewsHour with Jim Lehrer Transcript.  "FURY OF CREATION" April 30, 1998.
The New York Times. April 26, 1998, Sunday, Late Edition - Final, Gian Lorenzo Bernini, Art, Section 2; Page 42; Column 3.
Wilkins, Ann Thomas.  "Bernini and Ovid: Expanding the Concept of Metamorphosis."  International Journal of the Classical Tradition Winter2000,     Vol. 6, Issue 3, p383, 26p, 4bw. 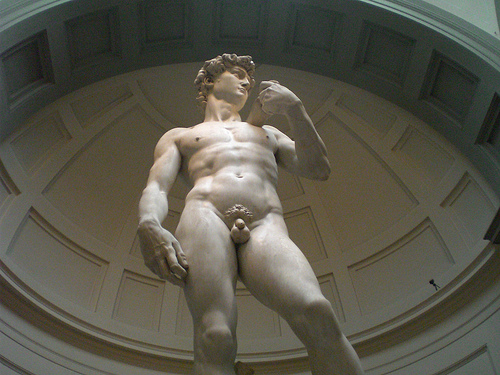 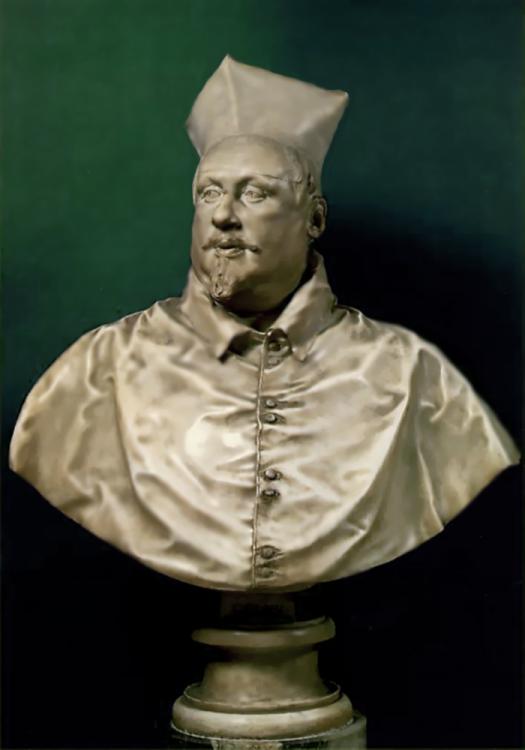 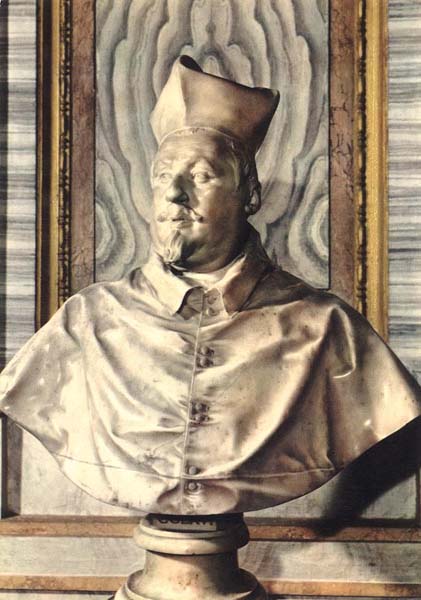 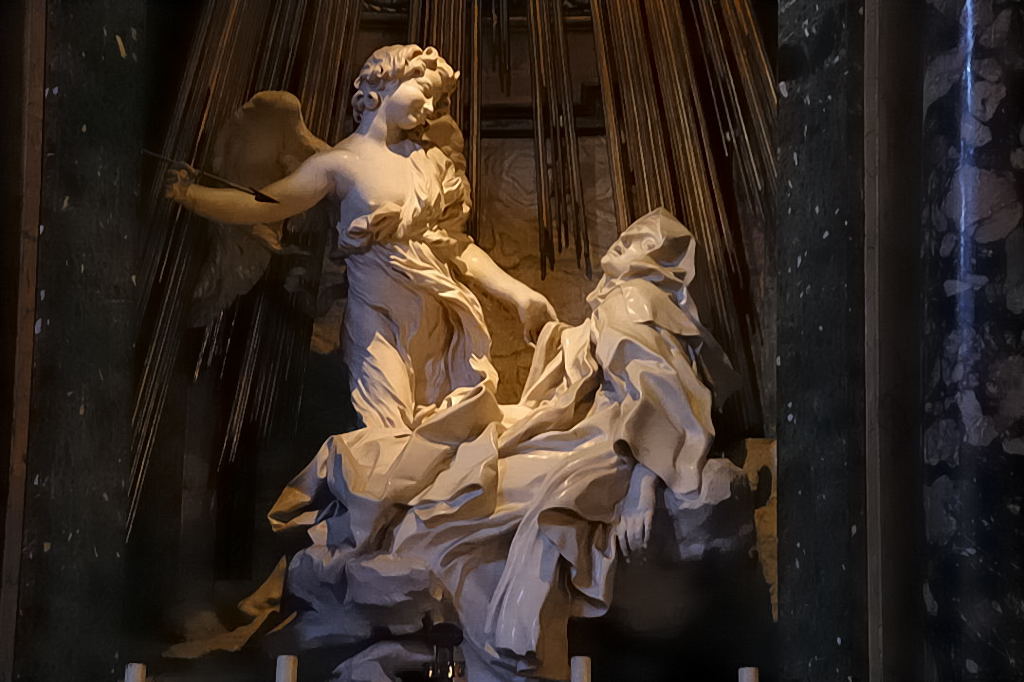 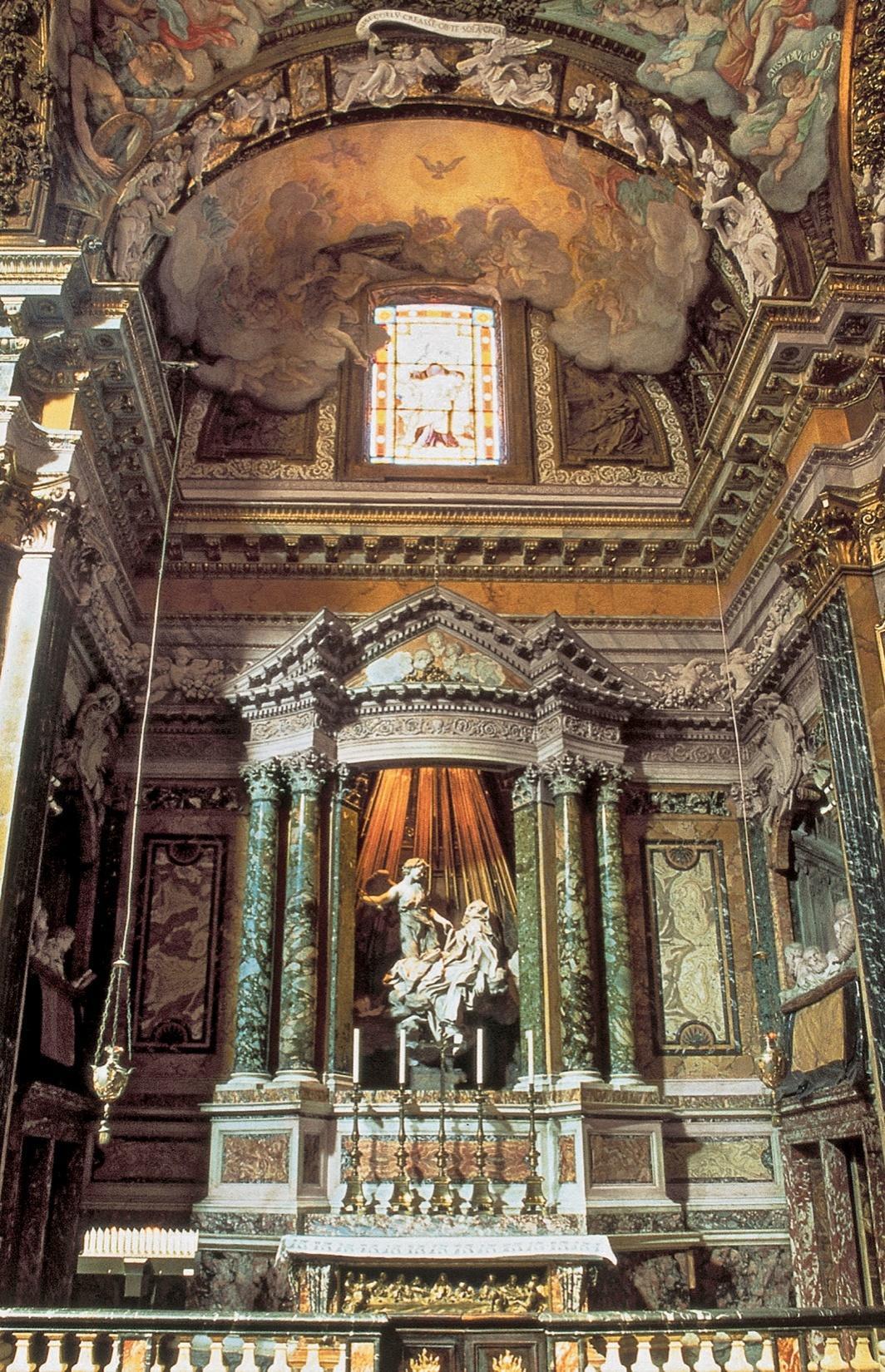 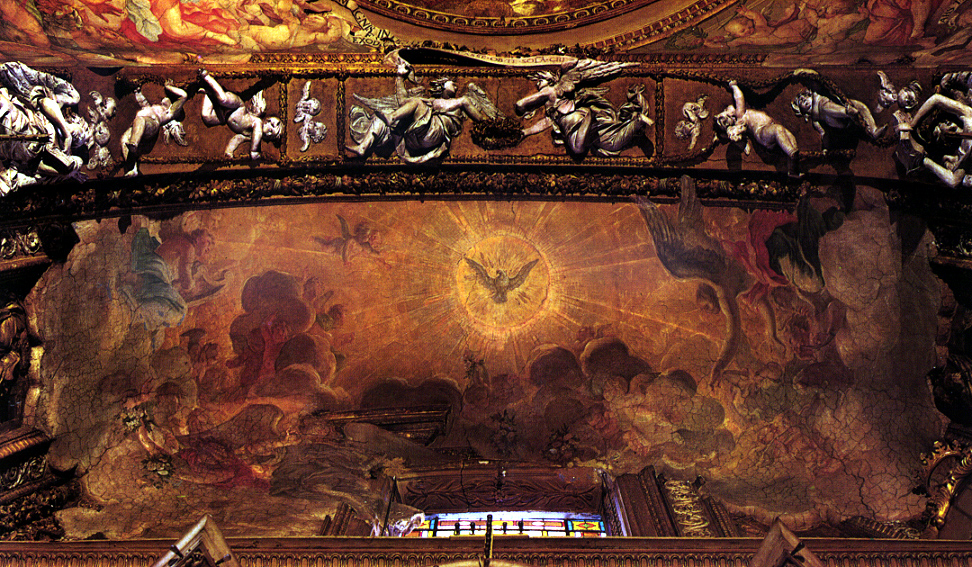 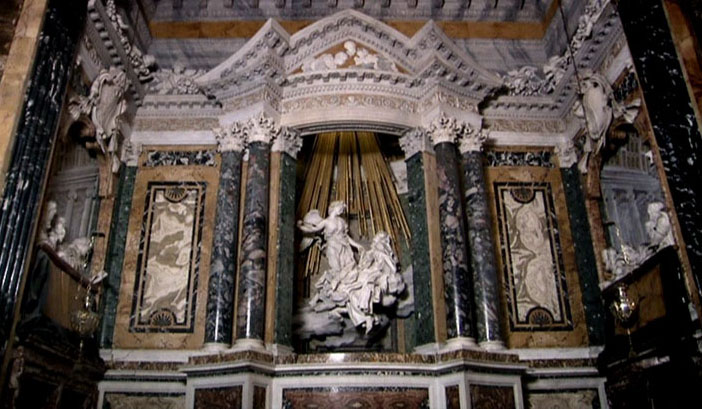 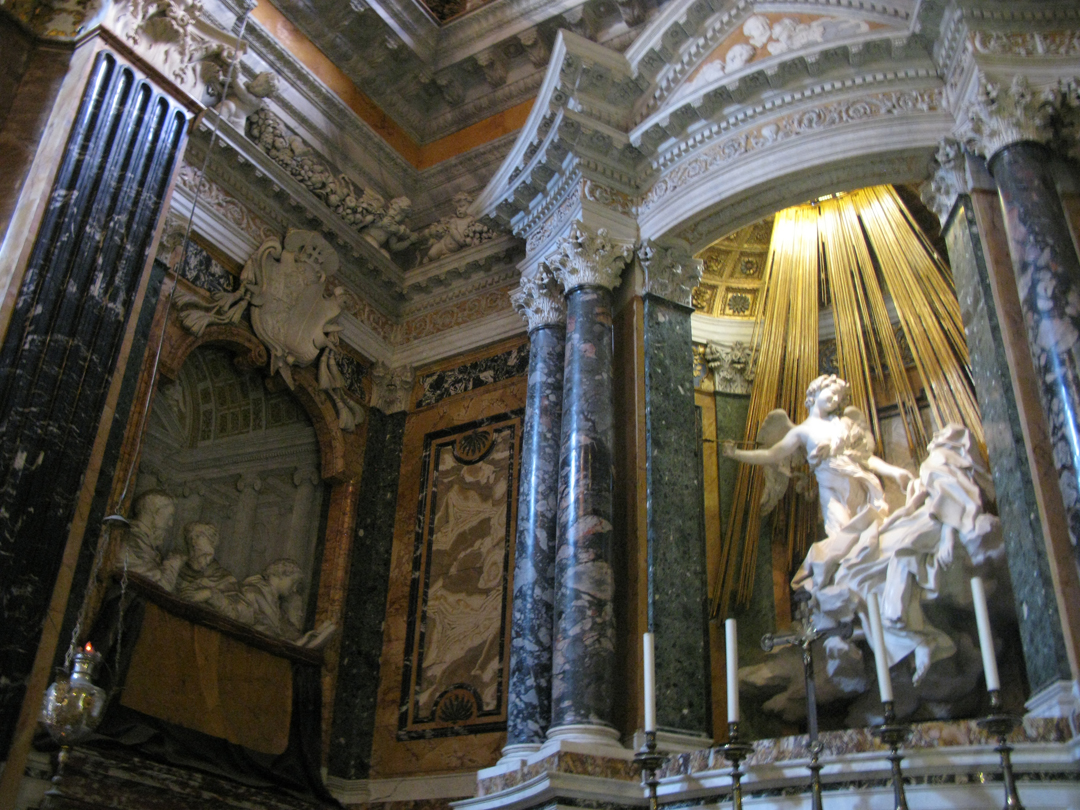 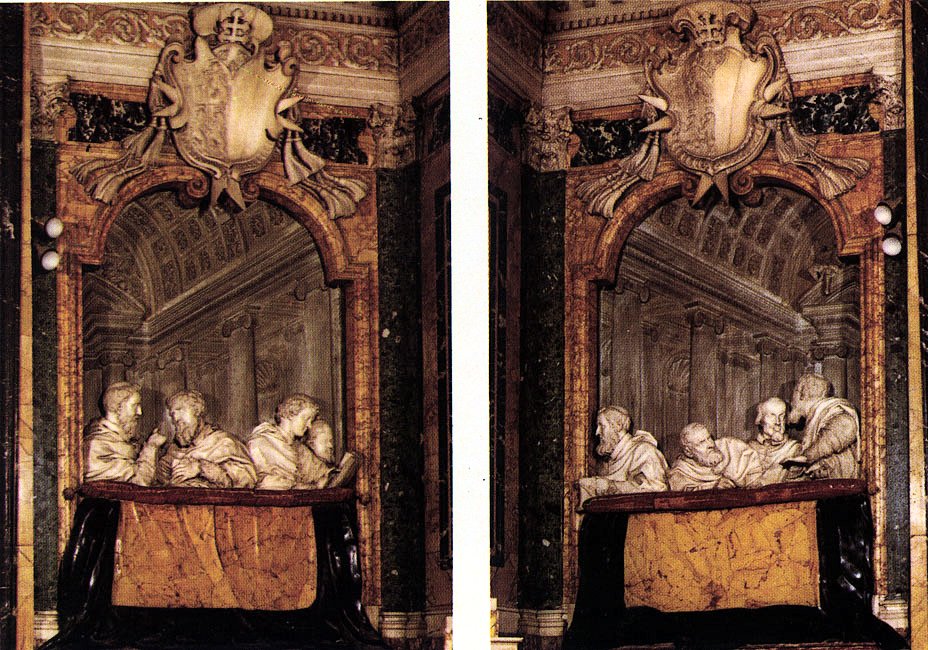 Posted by Kenney Mencher at 2:52 PM