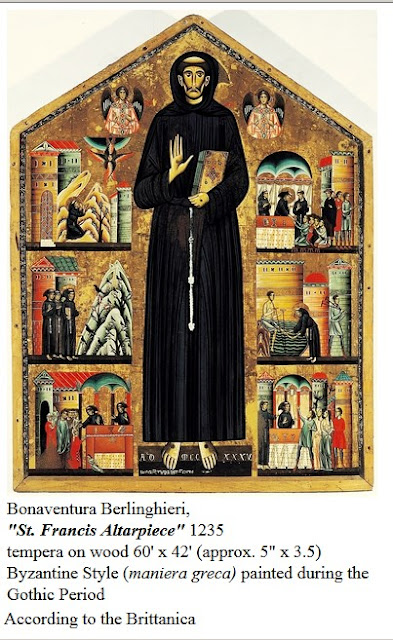 For the complete on-line course with all the videos in order, a PDF textbook and study guides please visit:
http://art-and-art-history-academy.usefedora.com/

Written by Annette Abbott
Context continued:  Many paintings like this have a rather Byzantine flavor or style to how they are painted.  This formulaic attempts to emulate Greek icons is what Vasari (an art hsitorian from the late 16th C) called the maniera greca in Italy.


from Francis Of Assisi, Saint
The Franciscan rule of life. Although he was a layman, Francis began to preach to the townspeople. Disciples were attracted to him, and he composed a simple rule of life for them. In 1209, when the group of friars (as the mendicant disciples were called) numbered 12, they went to Rome to seek the approval of Pope Innocent III, who, although hesitant at first, gave his oral approbation to their rule of life. This event, which according to tradition occurred on April 16, marked the official founding of the Franciscan order. The friars, who were actually street preachers with no possessions of any kind and with only the Porziuncola as a center, preached and worked first in Umbria and then, as their numbers grew, in the rest of Italy.
The early Franciscan rule of life, which has not survived, set as the aim of the new life, "To follow the teachings of our Lord Jesus Christ and to walk in his footsteps." Probably no one in history has ever set himself so seriously as did Francis to imitate the life of Christ and to carry out so literally Christ's work in Christ's own way. This is the key to the character and spirit of St. Francis. To neglect this point is to show an unbalanced portrait of the saint as a lover of nature, a social worker, an itinerant preacher, and a lover of poverty.
Certainly the love of poverty is part of his spirit, and his contemporaries celebrated poverty either as his "lady," in the allegorical Sacrum Commercium (Eng. trans., Francis and His Lady Poverty, 1964), or as his "bride," in the fresco of Giotto in the lower church of S. Francesco at Assisi. It was not, however, mere external poverty he sought but the total denial of self (as in Letter of Paul to the Philippians 2:7).
He considered all nature as the mirror of God and as so many steps to God. He called all creatures his "brothers" and "sisters," and in his "Canticle of the Creatures" (less properly called by such names as the "Praises of Creatures" or the "Canticle of the Sun") he referred to "Brother Sun" and "Sister Moon," the wind and water, and even "Sister Death." His long and painful illnesses were nicknamed his sisters, and he begged pardon of "Brother Ass the body" for having unduly burdened him with his penances. Above all, his deep sense of brotherhood under God embraced his fellow men, for "he considered himself no friend of Christ if he did not cherish those for whom Christ died."
"The Franciscan rule of life.."   Britannica 2001 Standard Edition CD-ROM.   Copyright © 1994-2001 Britannica.com Inc.   November 16, 2002.

Context and Critical points of view:  The previous section is a a biography of St. Francis's life however, Francis represents a pivotal figure that represents the transition in thinking between the Gothic period and the Renaissance. Previous to the life of St. Francis, the Catholic Church was the sole source of information about God for the layman (every day non-clergy).  The Church interpreted, interceded and imposed a very clear point of view about God's teachings and was the sole source of biblical interpretation.  In fact, laymen were not even allowed to own a Bible, not that they could afford one since they were hand written and very expensive.  This point of view and religious/political system meant that everyday people could not actually "know" God for themselves and supported and maintained a point of view that one was born to a place on this earth that was unchangeable.
Francis's point of view that "To follow the teachings of our Lord Jesus Christ and to walk in his footsteps." Breaks with this tradition and demonstrates the beginning of a point of view in which the lay person could not only have a direct experience of God but also alter their behavior in accordance with their knowledge without needing to consult the Church for interpretation.  This is important and interesting because aside form the ideas exhibited in the teachings of Thomas Aquinas, this represents the beginning of a change in the way of thinking and the stirrings of individual critical thought.  The art that follows, after the Byzantine period and in the late Gothic and Early Renaissance exhibits a new and critical point of view of the world.
Posted by Kenney Mencher at 8:17 AM