The dome and Florence Cathedral is one of the most famous domes in the world. In terms of its context, or contextual analysis, the dome in the cathedral itself are central to any understanding of Renaissance art. The baptistery of the dome has some doors on it with gilded panels that Michelangelo named the so-called “Gates of Paradise,” and two major competitors worked on it one was named Brunneleschi and the other Lorenzo Ghiberti. The competition for the decoration of these doors in 1401 is one of those stories that art historians love to tell. In a nutshell, Brunneleschi lost the competition for the decoration of the doors because his panel was not illusionistic enough when compared to Lorenzo Ghiberti’s. I’ve since read in a couple of tour books that counsel that judge the doors actually awarded it to both Brunneleschi and Ghiberti as a joint project however Brunelleschi might’ve been a bad loser and decided to not work with Ghiberti. 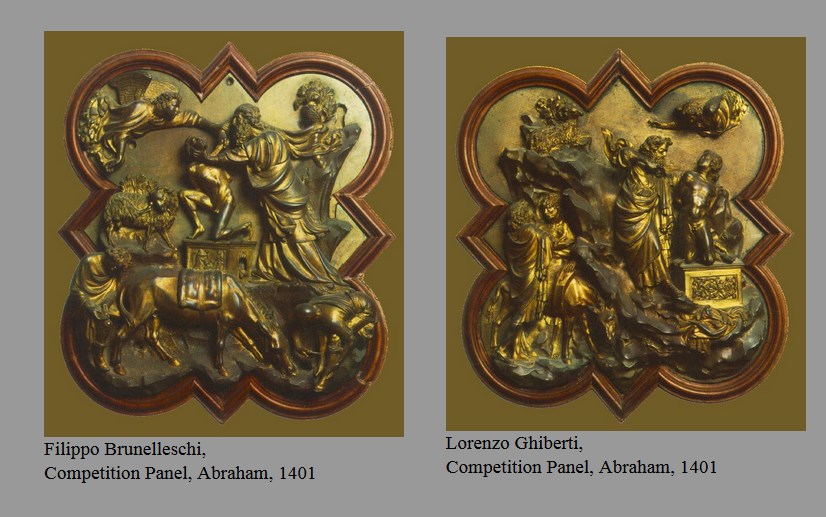 Despite this, or because of this, it’s possible that it freed Brunneleschi up to work on the dome of the cathedral that had been roof less, or in this case dome less for close to 100 years.

In earlier videos and projects for this class I discussed how Florence was the home or possibly the starting place of the Italian Renaissance due to the fact that it was a republic and also that they valued an education in the humanities. In any case despite those theories Florence had a lot of money because it was doing very well in terms of trade and whenever there’s money available there is also building projects and money left over for the arts. This is probably why Florence Cathedral was completed in the 1420s.

Historians have theorized that Brunelleschi having seen the Pantheon and other Roman ruins around Florence may have been very inspired by these ruins and came up with some unique ideas about how to complete the dome for Florence Cathedral which was so incredibly large that at the time they had no idea about how to span the space effectively. 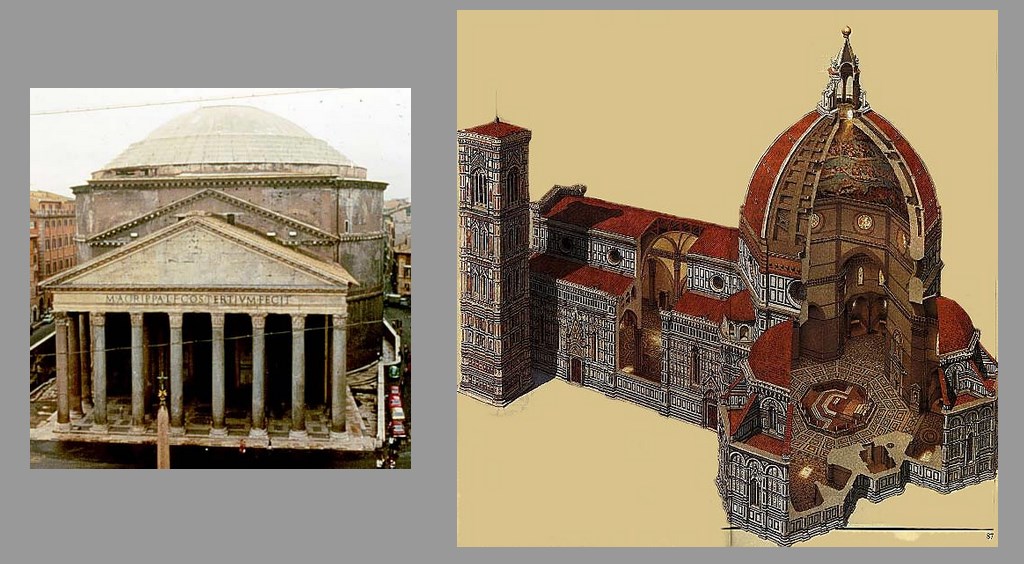 If you recall the Pantheon was constructed most likely under the guidance of Hadrian using a unique combination of cement, arches, and coffers that allow the dome to become thinner and lighter as it neared the top and also had a ring of arches constructed in the drum of the dome which acted as additional supports. This is very innovative, however it’s not really the technology that Brunelleschi used when he designed the completion of the dome in Florence. 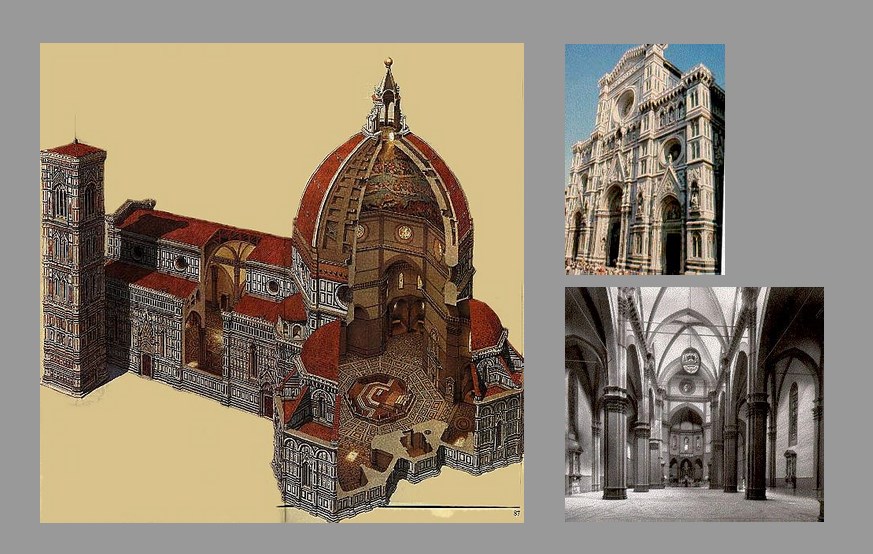 The anecdote, or story concerning Brunneleschi winning the commission to complete the dome is that Brunelleschi having shown the town elders some ideas, either in models or in drawings, about how the dome could be completed was scoffed at. The way that he convince them, according to legend, is that he took an egg and cracked it on the tabletop so that it stood erect. I’m not sure if this story is accurate but it does kind of demonstrate one of the concepts about building a kind of onion shaped dome that had become popular during the Renaissance especially in Florence and in Pisa. The basic concept behind Brunneleschi’s dome is using an egg like shape but also somewhat relates to the flying buttresses and the double dome construction found on the baptistery at Pisa Cathedral. 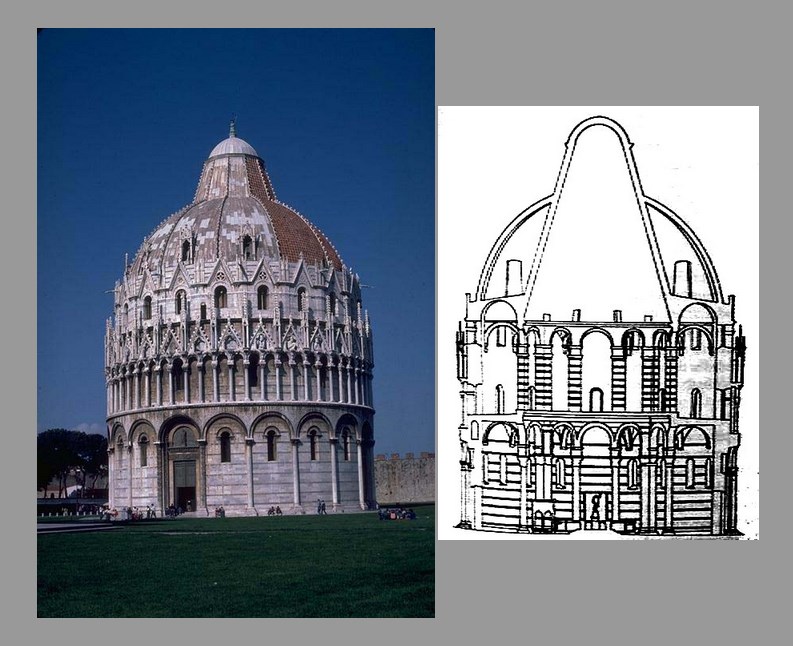 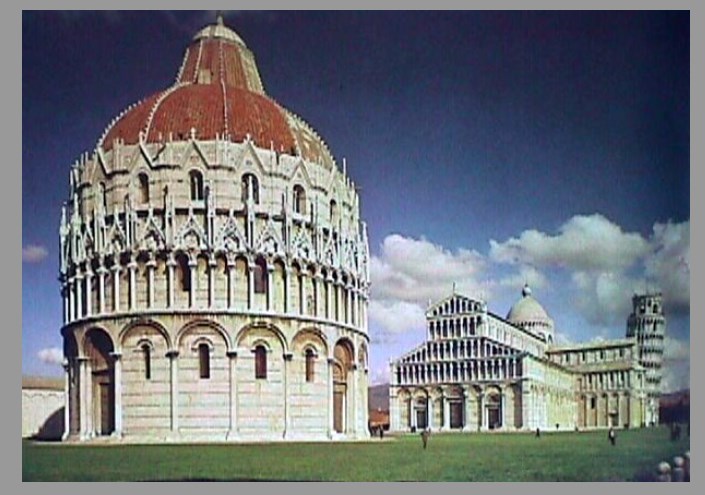 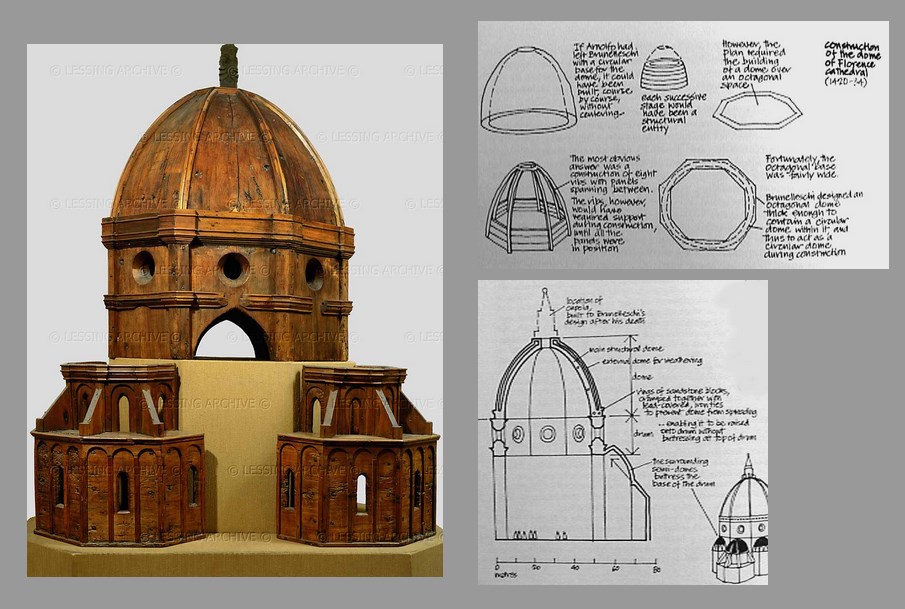 In this next section, I’ll do a formal analysis which discusses the double walled construction and egg like shape of the Florence Cathedral designed by Brunelleschi. 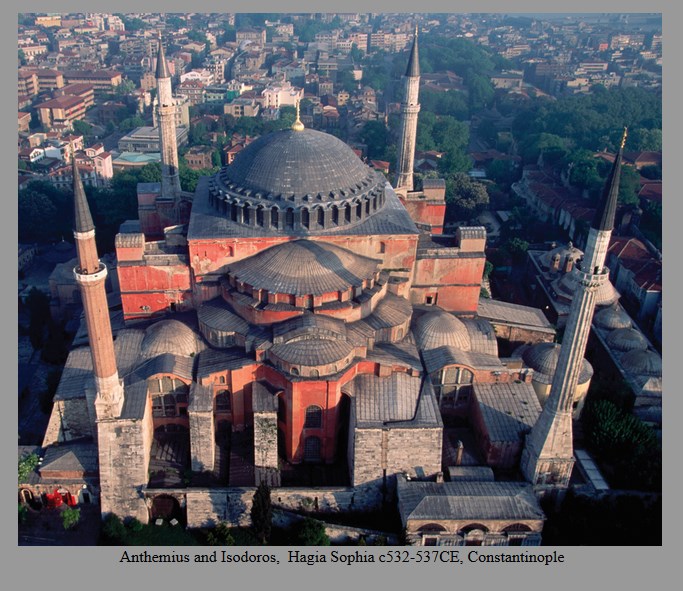 To begin with Brunneleschi decided to design the dome as an octagon with facets rather than a complete smooth dome. This is a logical way to handle it and would allow Brunneleschi more flexibility in terms of creating a type of skeleton that he would tie together with layered veneers of planks that were tightened in such a way that they actually were trying to spring out from the center of the dome. He also reinforces that dome with an exterior dome that allowed for the interior dome to be more supported. Since the interior timber rigging was springing out from the center of the dome Brunelleschi chose to counterbalance the forces by putting a type of lantern or counterweight at the very top of the dome which pressed down on the entire structure. He also surrounded the base of the dome with a series of half domes that act very similarly to the half domes found on the Byzantine Cathedral of Hagia Sophia in Istanbul.

Some of the additional features that he incorporated into the dome itself were that he also used a herringbone pattern of masonry, brickwork, to complete the interior filling in between the facets of the dome. There’s a story in which Brunneleschi created a plank and actually stood out over the interior of the dome and tried the masonry process himself before he would allow anyone else to do it. 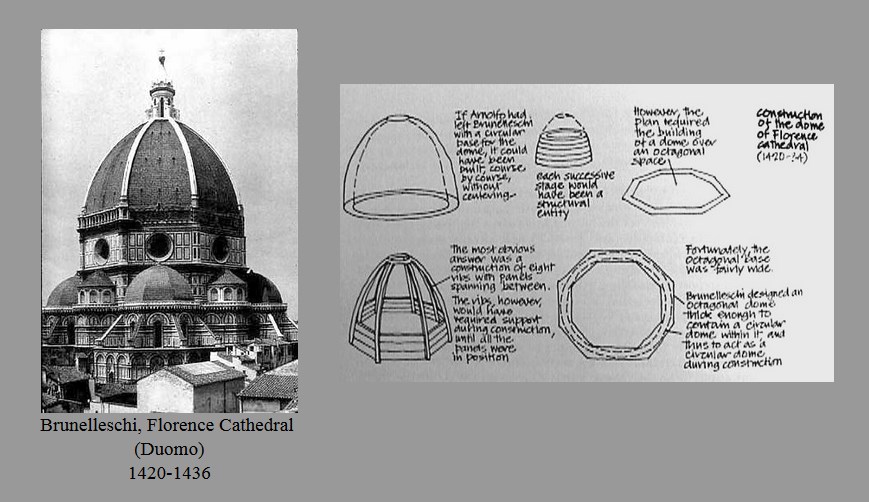 Other technological kinds of things that are involved with the building of the dome are that he also designed a series of ratchet type gears and devices in which he could reverse the direction of the cranes simply by flicking a switch.

In terms of how the dome itself looks it is not really a great example of Renaissance decoration. Although it’s large and beautiful and octagonal it isn’t really a transcendent aesthetic work of art but rather a work of engineering that demonstrates Renaissance ways of thinking and in this way the dome is symbolic or iconographic of Florence’s power intellectually and financially.

If you were to combine a contextual and iconographic analysis of the dome what you might conclude is that while the dome, and domes like it, relate back to the building of domes in ancient Rome and triumphal arches, it probably is more symbolic of how powerful and innovative the Florentines were in the 15th century.
Posted by Kenney Mencher at 4:46 PM