Depictions of Women in the Renaissance and Baroque


"Man is the measure?"
Women's roles during the Renaissance 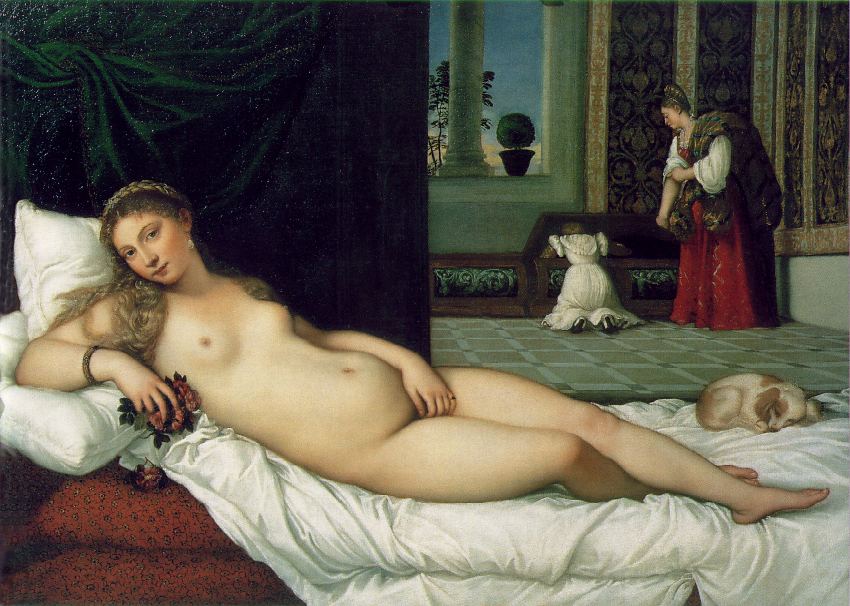 TIZIANO Vecellio (Titian) The Venus of Urbino 1538 Oil on canvas, 119 x 165 cm
Galleria degli Uffizi, Florence, Italian Renaissance In the background of Titian’s painting entitled "The Venus of Urbino" (1538) are two women looking inside or placing things inside a chest. This chest or cassone is most likely a dowry chest, in which case the women are then preparing the chest with gifts for the upcoming nuptials. Venus, the goddess of beauty, nude in the foreground, presides over the event, but there’s something wrong with this picture. Venus is really the Duke of Urbino’s courtesan (mistress) and the title of the painting is just a disguise to make a nearly pornographic portrait palatable. This kind of double meaning in a painting is common during the Renaissance especially in portrayals of women.
What is also interesting about this images is that the artist chose to juxtapose the eroticized female form with commodities or luxury items.  By playing the textures and body of the female against expensive fabrics, fur, fruit, and dowery chest containing the family jewels and porcelain, the artist is also making the human female form another commodity which can be bought and sold.  In this way, the wealth of the patron is also eroticized.  This device is played off again and again throughout the history of art.
The cassone is a familiar object in the upper class Renaissance home. Provided by the bride’s family and kept throughout her life the chest is symbol of her marriage. The decorations on the chest are designed to educate the woman who owns it. The images that adorn cassoni relate familiar classical and biblical narratives concerning the lives of great women. For example, San Francisco’s "Legion of Honor" has a panel from a cassone by Jacopo del Sellaio that depicts the "Legend of Brutus and Portia," circa 1485. Both Plutarch (AD 46-119), a Greek historian, and Shakespeare (1554-1616) in his play "Julius Caesar," depict Portia as a strong and loyal wife. In Shakespeare’s "Julius Caesar," Portia exclaims, "Think you I am no stronger than my sex, Being so fathered and so husbanded?" (Act 2, i, 319-320) and stabs herself in the leg to prove to Brutus that she can bear any discomfort for him. After she learns of Brutus’ defeat, she kills herself by swallowing hot coals. Another cassone from the Louvre depicts the Old Testament story of Queen Esther and her self-sacrificing patriotic acts that saved the Jewish people. The subtext of these tales is not just loyalty but self-sacrificing loyalty in the face of adversity.
Titian's painting has been the subject of much observation.  It's interesting that so much positive "press" has been associated with this image considering how much it has been vilified in the past.  Mark Twain, in his biography Tramp Abroad, recorded his response to his encounter with the Titian painting:

Christine de Pisan's The Book of the City of Ladies 1405

Christine de Pisan (also spelled Pizan) was one of the first feminists ever to right a treatise on women's rights. Her text is a response to the earlier the misogynic doctrines of the popular Roman de La Rose by Guillaume de Lorris. Although a response to Roman de La Rose it is not surprising, because of the early date of her text, that although she argues for equality she is still careful to preserve some elements of the status quo. The City of Women's arguments for equality are written as a series of imaginary or perhaps divinely inspired questions in which she speaks with "Lady Reason" who serves as the work's guide to the questions Christine poses.


11. CHRISTINE ASKS REASON WHY WOMEN ARE NOT IN THE SEATS OF LEGAL COUNSEL; AND REASON'S RESPONSE.
"Most high and honored lady, your fair words amply satisfy my thinking. But tell me still, if you please, why women do not plead law cases in the courts of justice, are unfamiliar with legal disputes, and do not hand down judgments? For these men say that it is because of some woman (whom I don 't know) who governed unwisely from the seat of justice." "My daughter, everything told about this woman is frivolous and contrived out of deception. But whoever would ask the causes and reasons of all things would have to answer for too much in this question, nor would Aristotle be at all sufficient, in spite of all the many reasons which he gives in his Problemata and Categoriae. Now, as to this particular question, dear friend, one could just as well ask why God did not ordain that men fulfill the offices of women, and women the offices of men. So I must answer this question by saying that just as a wise and well ordered lord organizes his domain so that one servant accomplishes one task and another servant another task, and that what the one does the other does not do, God has similarly ordained man and woman to serve Him in different offices and also to aid and comfort one another, each in their ordained task, and to each sex has given a fitting and appropriate nature and inclination to fulfill their offices. Inasmuch as the human species often errs in what it is supposed to do, God gives men strong and hardy bodies for coming and going as well as for speaking boldly. And for this reason, men with this nature learn the laws - and must do so - in order to keep the world under the rule of justice and, in case anyone does not wish to obey the statutes which have been ordained and established by reason of law, are required to make them obey with physical constraint and force of arms, a task which women could never accomplish. Nevertheless, though God has given women great understanding - and there are many such women - because of the integrity to which women are inclined, it would not be at all appropriate for them to go and appear so brazenly in the court like men, for there are enough men who do so. What would be accomplished by sending three men to lift a burden which two can carry easily? But if anyone maintained that women do not possess enough understanding to learn the laws, the opposite is obvious from the proof afforded by experience, which is manifest and has been manifested in many women -just as I will soon tell - who have been very great philosophers and have mastered fields far more complicated, subtle, and lofty than written laws and man-made institutions. Moreover, in case anyone says that women do not have a natural sense for politics and government, I will give you examples of several great women rulers who have lived in past times. And so that you will better know my truth, I will remind you of some women of your own time who remained widows and those skill govern - both past and present - in all their affairs following the deaths of their husbands provides obvious demonstration that a woman with a mind is fit for all tasks."

Posted by Kenney Mencher at 6:48 PM