Ajax and Achiles playing a game. It was found in Vulci, Italy but was manufactured most likely in the studio of a potter named Andokides in Greece 540-530CE. and then exported. 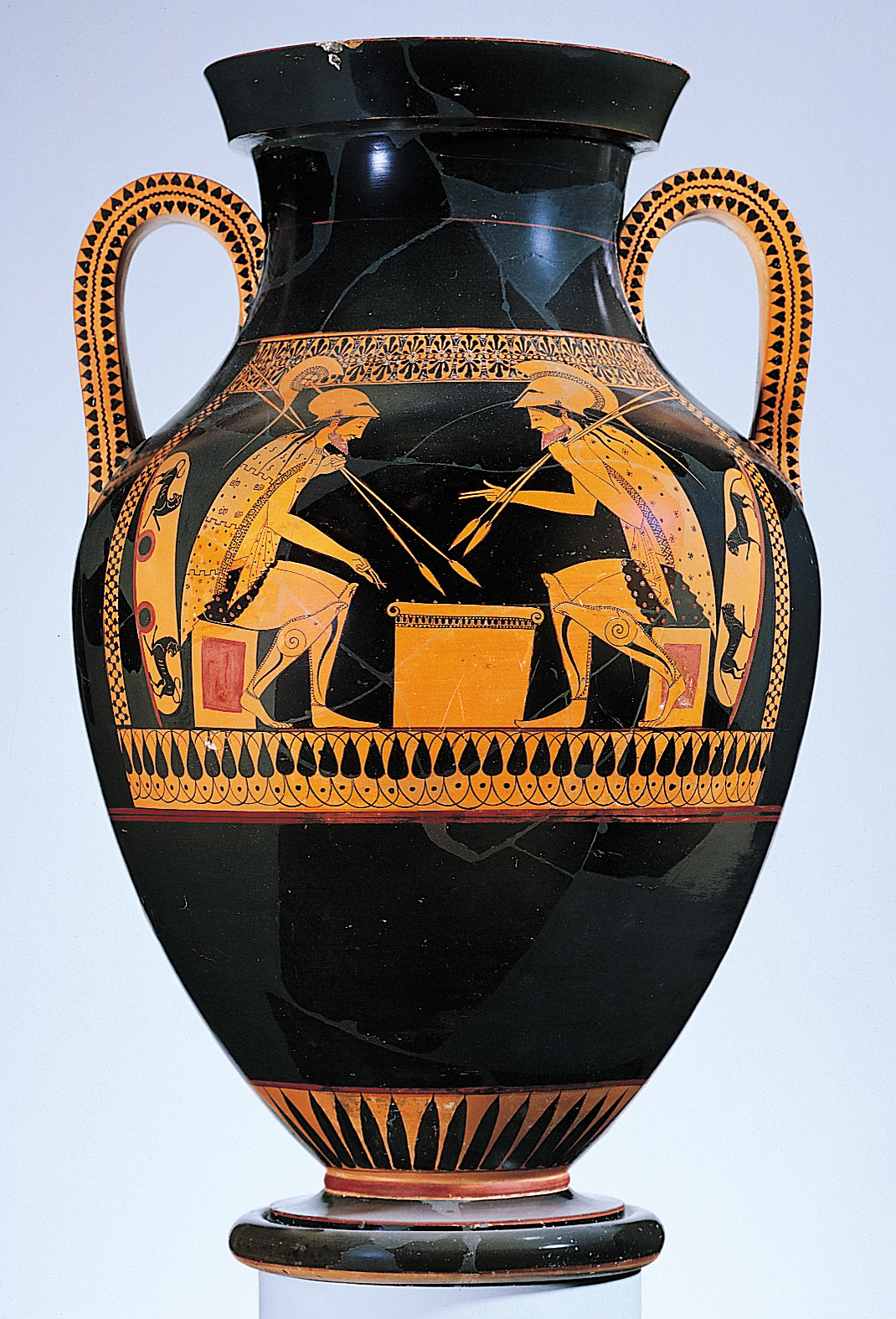 The Andokides Potter.
The "Bilingual Amphora with scenes of two soldiers playing a game."
It is not known who painted this vase.

The scenes probably depict Ajax and Achiles playing a game. It was found in Vulci, Italy but was manufactured most likely in the studio of a potter named Andokides in Greece 540-530CE. and then exported. 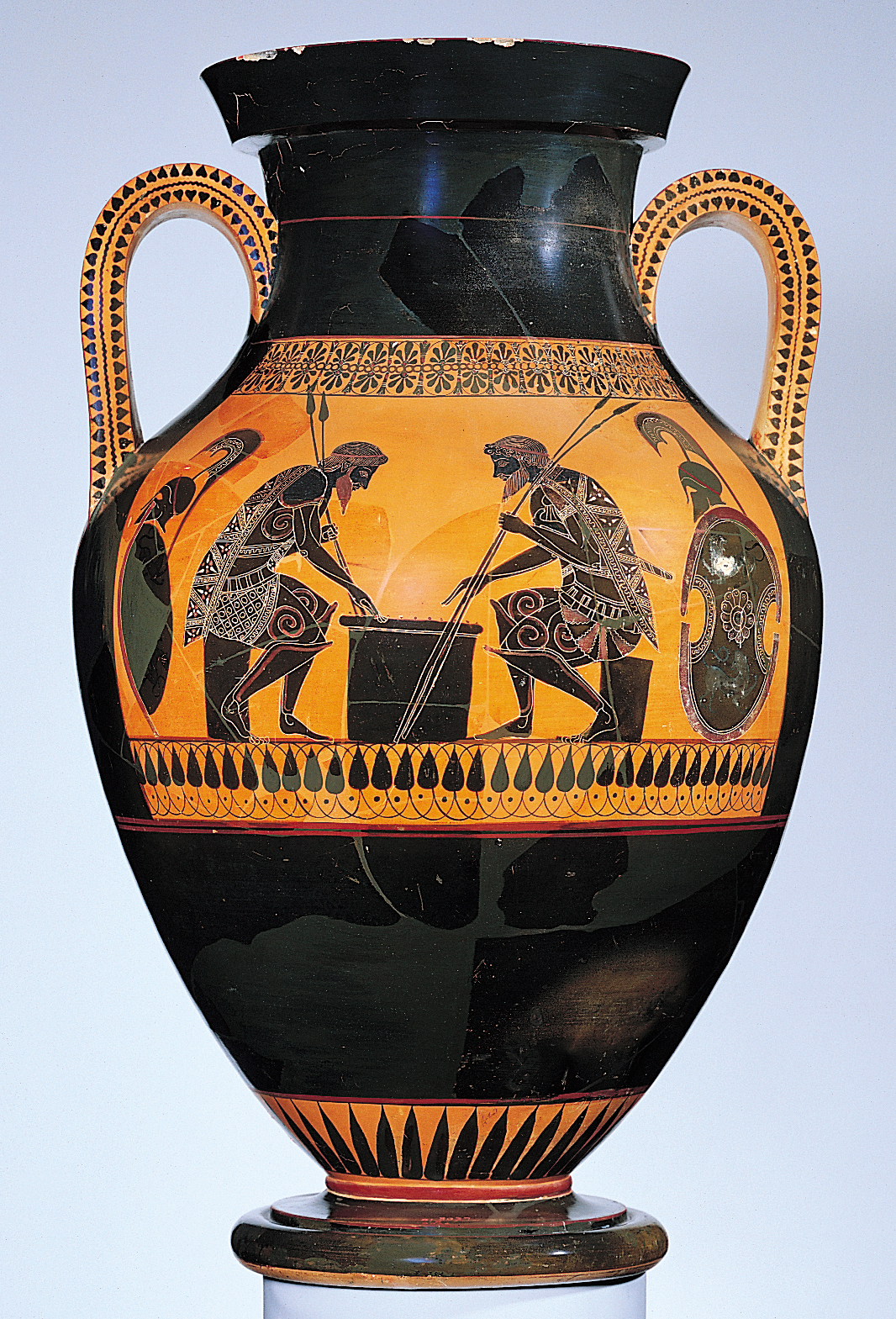 The history or provenance of the vase is a little confusing because most people want to claim that the painting on the vase might have been done by the Potter named Andokides. In sixth century Greece it was common for there to be a division of labor between the Potter who made the vases and vessels on a Potter’s wheel and a Potter’s assistant who may have decorated the vase. We see that in several vases where there are actually signatures by both the Potter and the painter on the vase. In this case, this vase is not signed. The reason why people attribute it to the painter Andokides was because a historian in 1901 named Beazley made an attribution based on the similarity in the painting style to other vases with signatures by Andokides. The proof that this vase was painted and made by the same artist is not clear so the best we have are educated guesses.

This vase called the bilingual amphora is probably made by a Potter named Andokides and possibly painted by Andokides however, there are small differences in style, sort of like a handwriting in line quality, between each side. The lines and the way things are drawn look a little bit different on each side and this may suggest that another painter participated in making the decorations on the other side. We also don’t really know if Andokides hired a separate painter to be his painter and all he did was throw the vases and then hand them to decorators after he was done.

Other important contextual data about the Potter Andokides is that contemporary historians believe that it’s possible that the red figure type of pottery was born in his workshop. It’s also believed that Andokides was possibly the student of the Potter that we studied named Exekias.

This vase has two types of decoration on it. On one side it has a more traditional black figure style of decoration in which the figures skin is almost a silhouette that is filled in with black glaze. The reverse side of the vase uses what art is sometimes referred to as “figure ground reversal.”

Figure ground reversal is actually just a fancy way of saying the image becomes positive and negative and you can see slightly different things in it for example look at this diagram. Essentially, what the Andokides painter was able to do was make the skin color of the characters the red of the clay which makes a little bit more sense by painting all of the space around the figures with a darker glaze. However, this looks more realistic and became a favorite style when we get into the high classical age of ancient Greece. So the fact that there are red figures on one side and black figures on the other is an important detail. The fancy way of saying this is that the painter was bilingual, meaning he spoke to languages in terms of visual style the black figure and the red figure.

The next important formal elements concern the overall scene and its composition. On both sides of the vase there is a ovoid or rectangular-ish shape that defines a scene in the center of the amphora. This is a shift away from the horror vaccui that the earlier phases of pottery exhibited. Now there are some decorations that are on the handles and a leaf or organic design that helps to define the major scene in the center. Seated in the center of this “scene” are two men, on one side wearing the armor on the other side book ended by their armor and shields, playing a game on a low box. Both of the figures on either side are depicted in profile view and the anatomy of each is very realistic and fairly naturalistic in terms of proportion and shape although there are some suggestions of stylize in the forms of legs and feet geometrically. Sometimes the anatomy looks like it’s been reduced to geometric shapes. The faces are still fairly cartoonlike and the eyes, although the head is in profile appear to be in frontal view.

Horror vaccui is exhibited in the ornamentation of the clothing and the armor which has intricately carved or incised lines that describe different kinds of shapes for example flower patterns. This is called scraffito and is accomplished by taking a sharp metal needle or awl and incising intricate designs into the glaze probably before the pot has been fired.

The title that Beazley gave this pot is, “Ajax and Achilles playing a dice game.” Although a majority of vases depict the low in battle in which the two heroes from Homer’s “Iliad and Odyssey,” this could be just two soldiers playing a board game. However, the majority of scholars overwhelmingly describe the scene as specifically Ajax and Achilles playing a dice game because of its provenance in the Iliad. Since this is a reasonable assumption we can probably take the iconographic analysis a little bit more deeply and examine why there are so many depictions of soldiers and so many depictions of heroes from Homer’s famous books.

Most likely the depiction of heroes from Greek literature had a twofold purpose. In some ways the heroes on these vases are very similar to our depictions of people like George Washington crossing the Delaware or famous war monuments. They are part of the culture and they also depict the values of the culture that are most highly prized. In this case it’s a way of reinforcing the idea of establishing oneself through battle and through heroic acts. One of my professors, Herbert Broderick from Lehman College at City University of New York, suggested the idea of a cult of “death” or heroic death that is reinforced by depicting famous warriors. Almost like the Norse mythology that deals with falling in battle will bring you immediate entrance into Valhalla the Norse heaven.
Posted by Kenney Mencher at 2:30 PM