The Blinding of Polyphemus c675 BCE 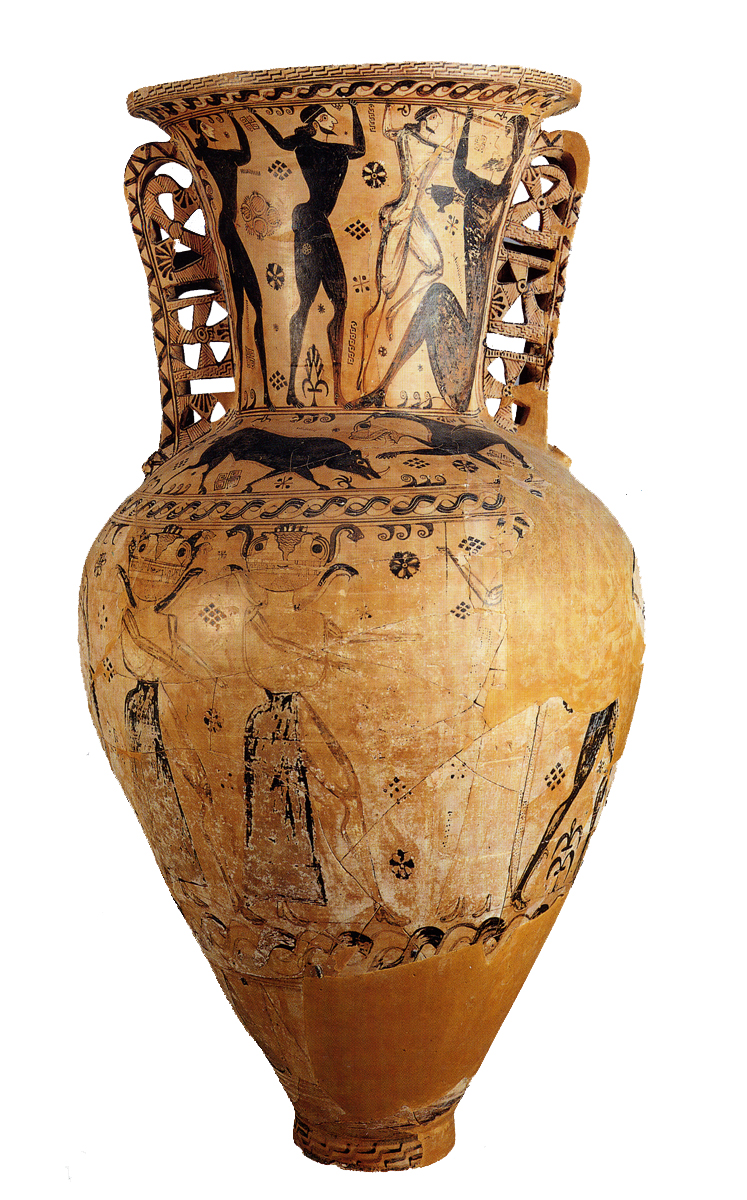 Formal Analysis
This phase is painted with slip and on engobe and then fired. It was thrown on a wheel and it was considered an “amphora” design because it has two handles. (The Greek word for “to carry” is “amphora.”)
It was most likely a decorative item because the handles would make this vessel hard to hold and the handles themselves are delicately ornamented. The ornamentation on the handles themselves reflect the Orientalizing style.

The figures on the top register are fairly naturalistic views of the human body in profile. The eyes are depicted in a frontal view. The bodies are well muscled and are fairly accurately proportioned. There is one giant creature on the right-hand side who has a spear being driven into his eye by the other three figures. Two of the figures have a black silhouetted body while one has been painted with a lighter glaze that appears almost white. The second major scene is located in the middle fret. This scene depicts a boar as well as some other kinds of animals. This scene is divided from the bottom scene with a rope like pattern. 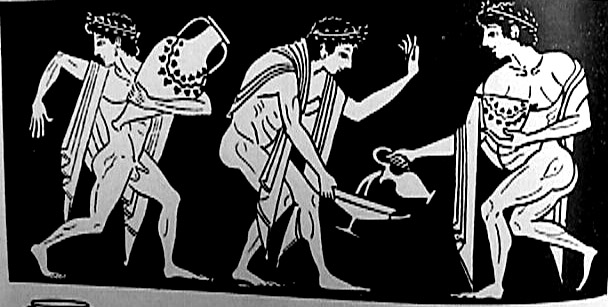 Iconographic Analysis
There are three distinctive scenes on this vase. Two of them it’s very clear what they represent the central one is not. Starting from the top the scene that we see in the topmost register is a scene in which Odysseus and his men are blinding the monster/giant Polyphemus.

The story from the Odyssey concerns Odysseus trying to return home after the Trojan wars. His men and he arrive on an island that is dominated by the sons of the God Poseidon.  These giants are all single eyed giants called Cyclopses. This relates to the architecture at Mycenae in which they thought giant monsters, the Cyclops, moved the large blocks of stone.

Odysseus and his men land on the island and enter into the one eyed giant’s cave.

The giant named Polyphemus is not home. In Polyphemus’s absence Odysseus and his men helped themselves to the food in the giant’s cave.

Polyphemus comes home to his cave and is preceded by his flock of sheep. Odysseus is men in stunned silence watch as the one eyed giant roles a large boulder in front of the entrance of the cave. Polyphemus sees what Odysseus and his men have done in his cave and responds by eating several of Odysseus’s men. Odysseus convinces the Cyclops to stop. He explains that he has magic in his head and if the Cyclops eats it he will not benefit from it. Odysseus also introduces himself by the name of “Nobody.”   Then Odysseus and his men offer the Cyclops wine, the Cyclops has never had one before. The Cyclops drunkenly falls asleep. Although the Cyclops is asleep the men cannot escape because the boulder is in front of the door.

Odysseus and his men sharpen and fire harden the tip of a great spear or timber. They then plunge the hot tip into Polythemus’s eye. Polyphemus tries to find the men to get them but cannot because the men have hidden themselves tied to the bottom of the sheep knowing that Polyphemus must let out the sheep to graze. Polyphemus in order to let his sheep out roles the boulder back but stands in the doorway and feels the top of each sheep to see that it’s not a man. However, Odysseus and his men are tied to the bottom of the sheep and they escape.

Look at the vase an amphora can see that the two men behind Odysseus are painted in a darker color, this is probably just to distinguish them from the leader who is coded in a lighter color. You can also see between the Cyclops who is as tall as a man while he is seated and Odysseus is a small decoration that looks like an amphora. All of the elements in the story are in the picture. We have Odysseus and his men, a spear, a wine vessel, and a giant who is trying to push the spear out of his eye. There are several themes and ideas that are presented in this vase and the tail of Odysseus and Polyphemus is at the top of it. It’s not random that they chose a story from the major work of art of the era. Odysseus is a heroic type and this is really important to the Greek world. One idea is that in these tales of the Iliad and the Odyssey that were written down somewhere in the ninth or eighth centuries B.C.E. establish a new standard for what it means to be Greek. Odysseus is the prototype of a great hero for the Greeks because he is both intelligent and physically able. He is also clever. In opposition to this the Cyclops in a way represents the other point of view.

The Cyclops has only one I and can see things only in one way. He is a giant and physically powerful however he represents the opposite of what Odysseus and his men are which is people who can see two points of view and also allow themselves to be clever as well as relying on strength and heroic physical action. Think of him as the Superman of the day.

The next scene we see is just underneath the scene in which Odysseus blinds the Cyclops.  The scene underneath it is called the Caledonian Boar Hunt. It’s another story of heroism in which a monstrous boar attacks a city and the men band together to defeat it. Both stories also deal a little bit with the theme called hubris. Hubris is a theme that will have to talk about quite a bit in this class.

Hubris is when an individual is so full of pride and arrogance that they commit an act that offends the gods. In Greek mythology the gods always visit revenge on that person. In the tell of Odysseus he was boasting that he was more powerful than Poseidon at one point and so Poseidon did not allow him to come home for many years after the Trojan wars. Poseidon was punishing Odysseus for his acts of hubris. The Caledonian Boar was sent because the King had offended the goddess Artemis by not paying tribute to her. So she sent the boar as punishment. In most cases of hubris the people of committed the act need to make reparations by doing something heroic and thoughtful. Heroic and patriotic acts are the most powerful ones that any man can make in the ancient Greek world. It’s basically a form of propaganda to get people to be good soldiers and citizens. Sort of like our stories about George Washington never lying. 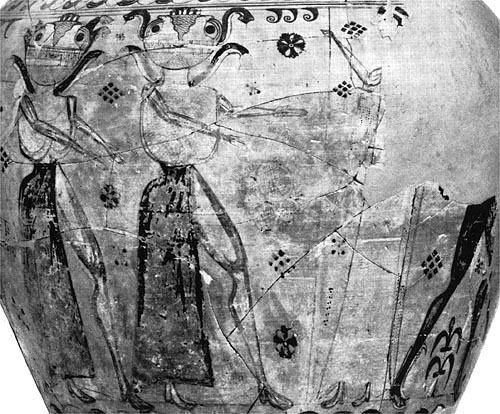 The image beneath the boar hunt is a representation of the three Gorgons who are the unfortunate offspring of two other gods. They are described as being so hideous that one turns to stone if they look at them. They have horrible men’s faces and snakes for hair. The hero Perseus uses his intelligence to kill them. He shines up a shield and looks at a blurred reflection of the Medusa and cut her head off and uses it later to defeat his enemies. I suppose if you look at Greek art you could say that you can judge a book by its cover. In the story of Medusa and Perseus as well as the story of the Cyclops their physical deformities match the character of the creature. Both Cyclops and Medusa are described as being very ugly and in some ways treacherous. If you go back to Minoan art you’ll remember that King Minos’s son the Minotaur was punishment for an act of hubris on his part and also represented in some ways being bullheaded. One of the great things that’s a lot of fun about studying Greek art and Greek mythology is that you can use these themes over and over again and discuss them in complex ways. A lot of the themes that we’ve just discussed are often used even in today’s movies.  For example the Joker and the Penguin are both ugly creatures in opposition to how Batman/Bruce Wayne looks. What the character looks like exemplifies the inner qualities of that character. 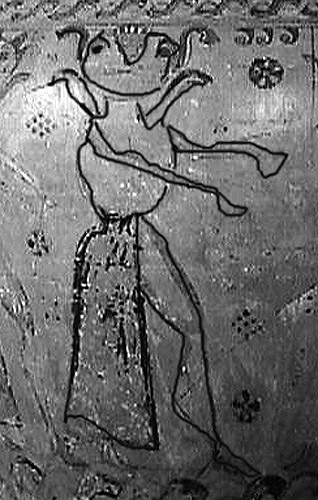