Cezanne, The Father of Cubism

"The greater the artist the greater the doubt; perfect confidence is granted to the less talented as a consolation prize. "As a painter, I become more lucid in front of Nature," Paul Cezanne wrote to his son in 1906, the last year of his life. "But that realization of my sensations is always very painful. I cannot attain the intensity which unfolds to my senses. I don't have that magnificent richness of coloration which animates nature." As Picasso famously said, it's Cezannes anxiety that is so interesting. But not only the anxiety. There are anxious mediocrity's too. It's the achievement that counts. If Cezanne was not a heroic painter, the word means nothing. This was evident to some of his friends and contemporaries, such as Emile Zola. They saw, as later generations have seen, that his painting was also a moral struggle, in which the search for identity fused with the desire to make the strongest possible images of the Other--Nature--under the continuous inspiration and admonishment of an art tradition that he revered. He compared himself, not quite jokingly, to Moses: "I work doggedly, I glimpse the promised land. Will I be like the great Hebrew leader, or will I be able to enter it? "He was indeed the Moses of late 19th century art, the conflicted, inspired, sometimes enraged patriarch who led painting toward Modernism--a deceptive Canaan sometimes, not always flowing with milk and honey, but radically new territory all the same. The essential point, however, is that just as Moses died before reaching Canaan, so Cezanne never lived to see Modernism take hold--and he might not have liked what he saw, had he lived. It used to be one of the standard tropes of art history that Cezanne "begat" Cubism, and it is a fact that no serious painter since 1890 has been able to work without reckoning with Cezanne. But the idea that Cubism completed what Cezanne began is an illusion. It may be that Cezanne was reaching for a kind of expression in painting that did not exist in his time and still does not in ours. Instead of theory, he had "sensation," the experience of being up against the world--fugitive and yet painfully solid, imperious in its thereness and constantly, unrelentingly new. There was painting before Cezanne and painting after him, and they were not the same. But Cezanne's own painting matters more than its consequences. Inevitably, this deep innovator claimed he invented nothing. "In my opinion one doesn't replace the past, one adds a new link to it." Yes and no. Modernism's patriarch. by Robert Hughes, Time, 6/10/96, Vol. 147 Issue 24, p72, 4p, 7c CEZANNE, Paul -- Exhibitions; ART museums -- Pennsylvania -- Philadelphia

Seurat, The King of the Dot


Vincent Van Gogh Van Gogh's work and the details of his biography are so linked to his paintings iconography that it would be almost impossible to discuss Van Gogh without a brief overview of his life.  The following is an excerpt from the Encyclopedia Brittanica. 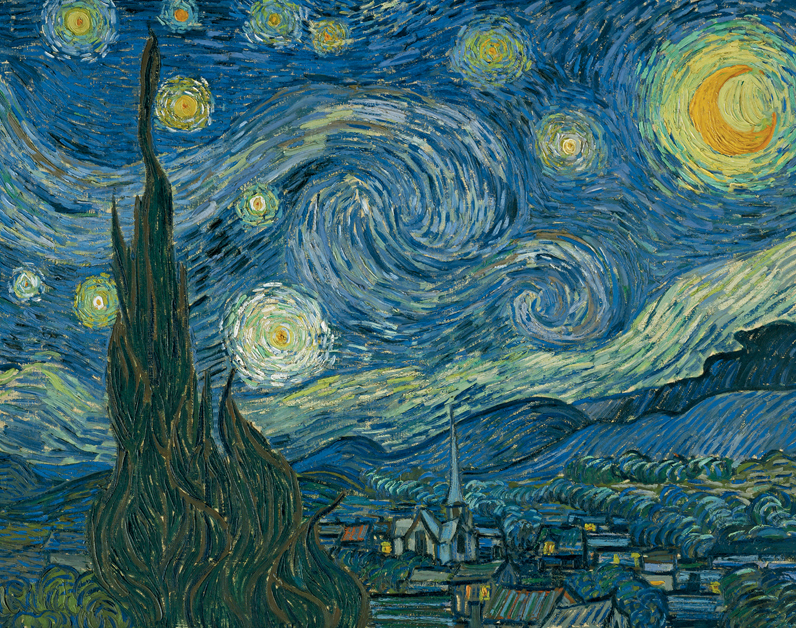 Form:  The texture of this painting is fairly rough because Van Gogh used thick impastos of paint.  Van Gogh also used straight umodulated out of the tube colors.  The dominant colors here are primary tones.  Van Gogh rendered most of the forms using outlines and contour lines and did not rely on value or chiaroscuro to define or describe his subjects.  In a way, this is more of a drawing with paint than a painting.  The brushstrokes in the sky are designed in sweeping large curvilinearcounterbalancing strokes.  Van Gogh's application of short dashes of colour one next to another is a demonstration of impressionist style optical mixing.  This is demonstrated especially in how he applied the blues of the sky. The composition is asymmetrical.  The large cyprus tree in the foreground dominates the image and its shape is echoed by the church's steeple in the background.

Iconography: This was painted while Van Gogh was locked up in an asylum in Saint-Remy, France. It was, of necessity, painted from memory unlike most of the rest of his work, which was painted either outdoors or as a still life.
The dominant elements in this painting are the sky, the stars in it, and the cypress tree in the foreground.  The fact that the sky is like a sea in motion could be read in any number of ways: as a clue as to the turbulence of Van Gogh's state of mind and or possibly an illustration of the unknown forces that move the universe.  The moon seems to radiate energy, but it does not appear friendly, or gentle, as one would imagine moonbeams to be. Instead it imitates the radiating waves one would find when a stone is dropped in a pond, disruptive.
The cypress tree in the foreground were often used as gravemarkers and were planted as memorials over graves.  In my interpretation, (Mencher's) the large tree in the foreground seems to connect the earth and the sky in a way that the steeple in the background cannot hope to.  This may possibly be Van Gogh's own ideas of the role of man in the world versus the role of nature in God's plan.  This idea being very similar to St. Augustine's ideas concerning the "City of Man and the City of God."  This is similar to Masaccio's interpretation in his painting The Tribute Money.
Context: Van Gogh was extremely religious in his early years, before he took up painting as an avocation. There is speculation that there is significance to the fact that there are eleven stars in the sky, taken from the Old Testament in the bible; the story of Joseph, " 'Look, I have had another dream,' he said, ' I thought I saw the sun, the moon and eleven stars bowing to me,' " Genesis 37:10


Iconography:  As in the "Starry Sky" the formal elements may be an expression of Vincent's internal world.  This painting was done in Vincent's own room in Arles. Note the cramped composition, the disproportion of the bed, the saturation of colors, and the odd angle of the paintings hanging over the bed. This, while done from life, does not accurately represent an external reality, it seems to represent his own 'internal' reality. Van Gogh was taken care of by his older brother Theo. As a result, he was allowed a certain amount of self-pity and malaise that other men his age and bearing could not afford to indulge themselves in. Theo sent him to Arles to 'rest', and Van Gogh was in a state of poverty and under-nourishment while living there, as well as hallucinations and acute depression. This resulting painting, nervous and cramped appearing as it is, is an accurate reflection on how he felt at the time, like the walls were pressing in on him, and all he could do was sleep. Like the religious fervor he had embraced earlier in life, Van Gogh became as equally obsessed with painting once he had decided it was his true calling, and felt that he must put on canvas the myriad demons within his own troubled mind.
Context: According to www.vangoghgallery.com,


" Vincent's Bedroom in Arles is one of the artist's best known paintings. The striking colours, unusual perspective and  familiar subject matter create a work that is not only among Van Gogh's most popular, but also one that he himself held as one of his own personal favourites.. because Van Gogh was so pleased with the painting he described it at great length in letters to his family. In fact, Vincent describes this painting in no less than thirteen letters and, as a result, a great deal is known about the artist's own feelings about the work.  In a letter to his brother, Theo, Vincent wrote:

' My eyes are still tired by then I had a new idea in my head and here is the sketch of it.
Another size 30 canvas. This time it's just simply my bedroom, only here colour is to do
everything, and giving by its simplification a grander style to things, is to be suggestive here
of rest or of sleep in general. In a word, looking at the picture ought to rest the brain, or rather
the imagination. The walls are pale violet. The floor is of red tiles.  The wood of the bed
and chairs is the yellow of fresh butter, the sheets and pillows very light greenish-citron.
The coverlet scarlet. The window green. The toilet table orange, the basin blue.
The doors lilac. And that is all--there is nothing in this room with its closed shutters.
The broad lines of the furniture again must express inviolable rest. Portraits on the walls, and
a mirror and a towel and some clothes.
The frame--as there is no white in the picture--will be white.
This by way of revenge for the enforced rest I was obliged to take.
I shall work on it again all day, but you see how simple the conception is. The shadows and
the cast shadows are suppressed; it is painted in free flat tints like the Japanese prints. It is
going to be a contrast to, for instance, the Tarascon diligence and the night café.'

asym.met.ri.cal or asym.met.ric adj [Gk asymmetria lack of proportion, fr. asymmetros ill-proportioned, fr. a- + symmetros symmetrical] (1690) 1: not symmetrical 2 usu asymmetric, of a carbon atom: bonded to four different atoms or groups -- asym.met.ri.cal.ly adv -- asym.me.try n ¹coun.ter.bal.ance n (1611) 1: a weight that balances another 2: a force or influence that offsets or checks an opposing force ²counterbalance vt (1611) 1: to oppose or balance with an equal weight or force 2: to equip with counterbalances
cur.vi.lin.ear adj [L curvus + linea line] (1710) 1: consisting of or bounded by curved lines: represented by a curved line 2: marked by flowing tracery <~ Gothic> -- cur.vi.lin.ear.i.ty n

Posted by Kenney Mencher at 8:41 AM