For all the videos in order with a textbook and study guides please visit:
http://art-and-art-history-academy.usefedora.com/Feel free to participate in the Survey Art History Facebook Group:
https://www.facebook.com/groups/SurveyArtHistory/

Chardin and Greuze:  Genre Scenes and Moralizing Art in the 1700's 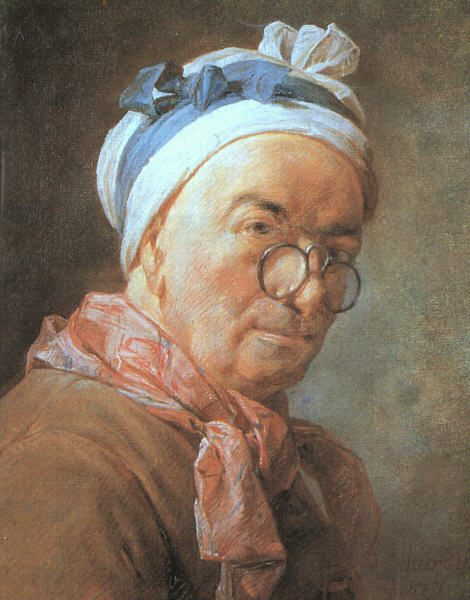 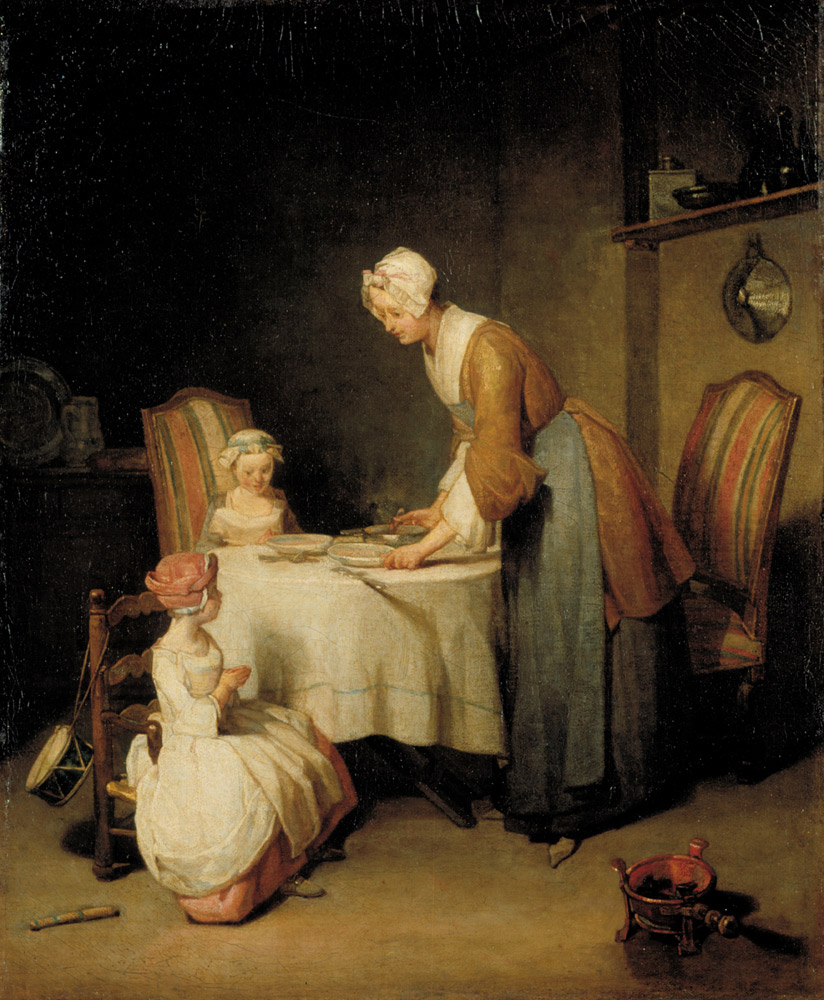 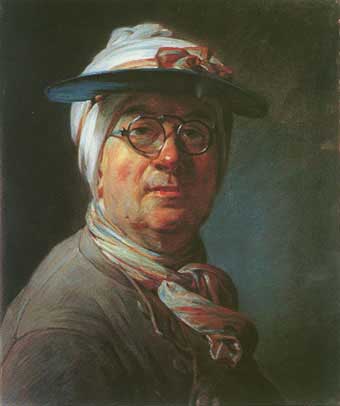 .
Context according to the Brittanica,


Chardin, Jean-Baptiste-Siméon
b. Nov. 2, 1699, Paris, Fr. d. Dec. 6, 1779, Paris
French painter of still lifes and domestic scenes remarkable for their intimate realism and tranquil atmosphere and the luminous quality of their paint. For his still lifes he chose humble objects ("Le Buffet," 1728), and for his genre paintings modest events ("Dame cachetant une lettre" [1733; "Lady Sealing a Letter"]). He also executed some fine portraits, especially the pastels of his last years. He was nominated to the Royal Academy of Painting in 1728. Born in Paris, Chardin never really left his native quarter of Saint-Germain-des-Prés. Little is known about his training, although he worked for a time with the artists Pierre-Jacques Cazes and Noël-Nicolas Coypel. In 1724 he was admitted to the Academy of Saint Luc. His true career, however, did not begin until 1728 when, thanks to the portrait painter Nicolas de Largillière (1656-1746), he became a member of the Royal Academy of Painting, to which he offered "La Raie" ("The Skate") and "Le Buffet," both now at the Louvre Museum.
Although not yet established, he was beginning to gain a reputation. In 1731 he married Marguerite Saintard, and two years later the first of his figure paintings appeared, "Dame cachetant une lettre." From then on Chardin alternated between paintings of la vie silencieuse ("the silent life") or scenes of family life such as "Le Bénédicité" ("The Grace") and half-figure paintings of young men and women concentrating on their work or play, such as "Le Jeune dessinateur" ("Young Man Drawing") and "L'Enfant au toton" ("Child with Top," Louvre) (and Soap Bubbles, c1733). The artist repeated his subject matter, and there are often several original versions of the same composition. Chardin's wife died in 1735, and the estate inventory drawn up after her death reveals a certain affluence, suggesting that by this time Chardin had become a successful painter.
In 1740 he was presented to Louis XV, to whom he offered "La Mère laborieuse" ("Mother Working") and "Le Bénédicité." Four years later, he married Marguerite Pouget, whom he was to immortalize 30 years later in a pastel. These were the years when Chardin was at the height of his fame. Louis XV, for example, paid 1,500 livres for "La Serinette" ("The Bird-Organ"). Chardin continued to rise steadily on the rungs of the traditional academic career. His colleagues at the academy entrusted him, first unofficially (1755), then officially (1761), with the hanging of the paintings in the Salon (official exhibition of the academy), which had been held regularly every two years since 1737 and in which Chardin had participated faithfully. It was in the exercise of his official duties that he met the encyclopaedist and philosopher Denis Diderot, who would devote some of his finest pages of art criticism to Chardin, the "grand magicien" that he admired so much.
An anecdote illustrating Chardin's genius and his unique position in 18th-century painting is told by one of his greatest friends, the engraver Charles-Nicolas Cochin, who wrote a letter shortly after Chardin's death to Haillet de Couronne, the man who was to deliver Chardin's eulogy to the Academy of Rouen, of which Chardin had been a member.

One day, an artist was making a big show of the method he used to purify and perfect his colors. Monsieur Chardin, impatient with so much idle chatter, said to the artist, "But who told you that one paints with colors?" "With what then?" the astonished artist asked. "One uses colors," replied Chardin, "but one paints with feeling."


He was nearer to the feeling of meditative quiet that animates the rustic scenes of the 17th-century French master Louis Le Nain than to the spirit of light and superficial brilliance seen in the work of many of his contemporaries. His carefully constructed still lifes do not bulge with appetizing foods but are concerned with the objects themselves and with the treatment of light. In his genre scenes he does not seek his models among the peasantry as his predecessors did; he paints the petty bourgeoisie of Paris. But manners have been softened, and his models seem to be far removed from Le Nain's austere peasants. The housewives of Chardin are simply but neatly dressed and the same cleanliness is visible in the houses where they live. Everywhere a sort of intimacy and good fellowship constitute the charm of these modestly scaled pictures of domestic life that are akin in feeling and format to the works of Jan Vermeer.
Despite the triumphs of his early and middle life, Chardin's last years were clouded, both in his private life and in his career. His only son, Pierre-Jean, who had received the Grand Prix (prize to study art in Rome) of the academy in 1754, committed suicide in Venice in 1767. And then too, the public's taste had changed. The new director of the academy, the all-powerful Jean-Baptiste-Marie Pierre, in his desire to restore historical painting to the first rank, humiliated the old artist by reducing his pension and gradually divesting him of his duties at the academy. Furthermore, Chardin's sight was failing. He tried his hand at drawing with pastels. It was a new medium for him and less taxing on his eyes. Those pastels, most of which are in the Louvre Museum, are highly thought of in the 20th century, but that was not the case in Chardin's own time. In fact, he lived out the remainder of his life in almost total obscurity, his work meeting with indifference.
It was not until the middle of the 19th century that he was rediscovered by a handful of French critics, including the brothers Edmond and Jules de Goncourt, and collectors (the Lavalard brothers, for example, who donated their collection of Chardins to the Museum of Picardy in Amiens). Especially noteworthy is the LaCaze Collection donated to the Louvre in 1869. Today Chardin is considered the greatest still-life painter of the 18th century, and his canvases are coveted by the world's most distinguished museums and collections.
(P.M.R.)
"Chardin, Jean-Baptiste-Siméon."   Britannica 2001 Standard Edition CD-ROM.   Copyright © 1994-2001 Britannica.com Inc.   December 28, 2002. 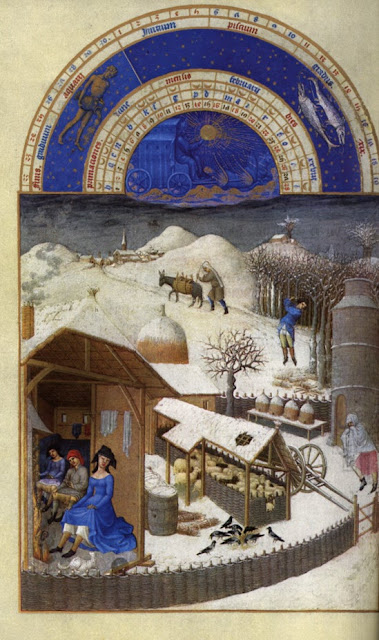 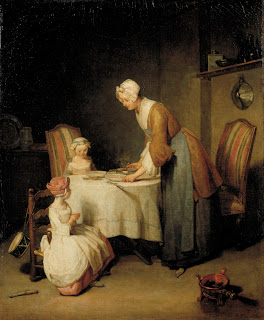 1) How do these images relate to the development of genre scenes between the Renaissance and the late Baroque periods? 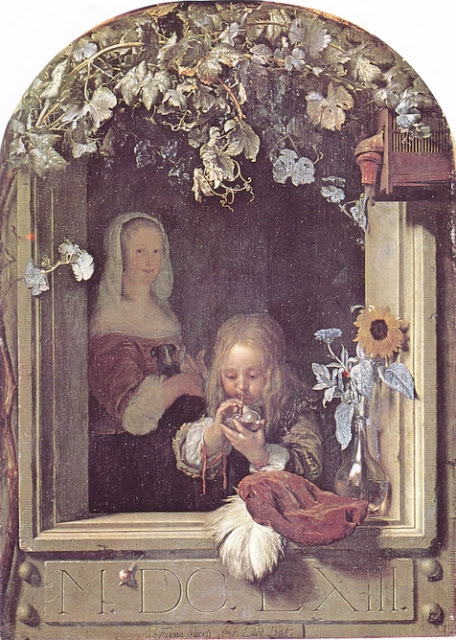 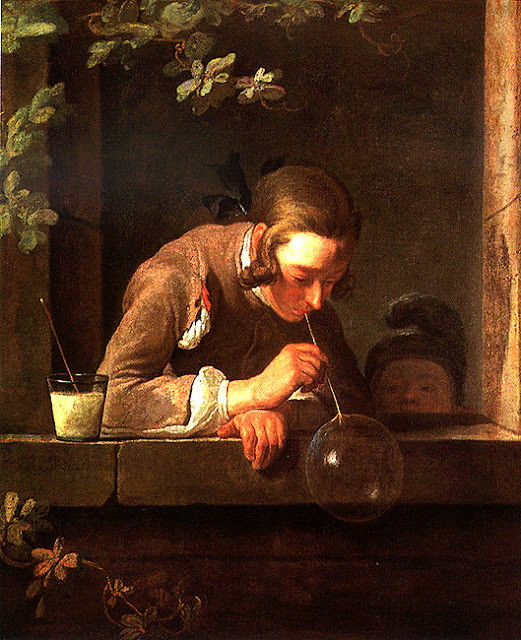 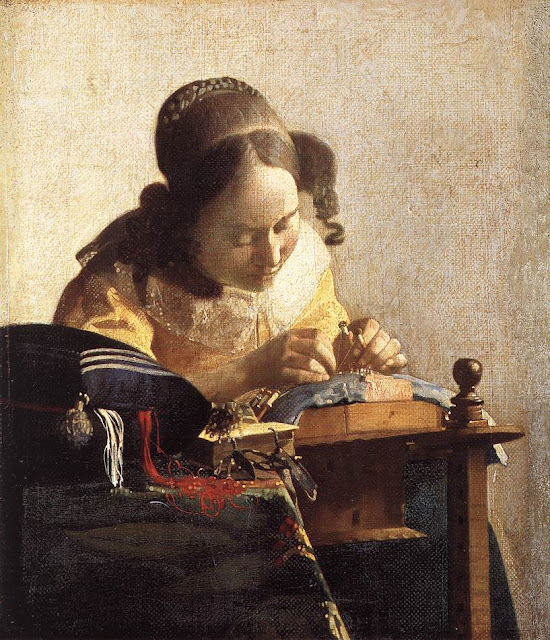 2) What kind of messages do each of these paintings communicate?  Are they similar or different? 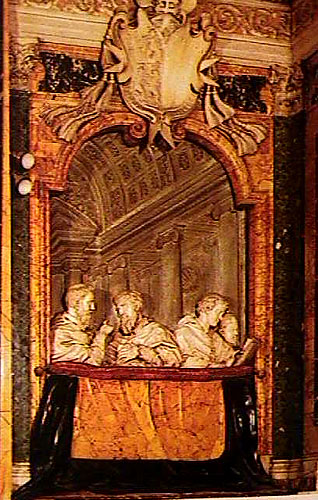 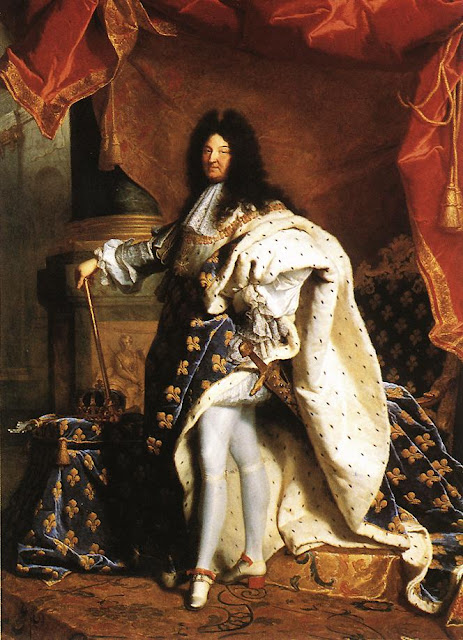 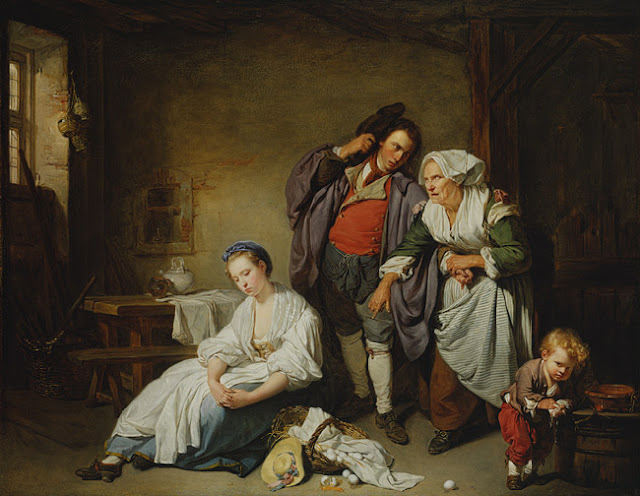 3) How might the development of theatre and opera relate to the creation of these works of art?