Caravaggio and His Influence

See them all in order with additional reading materials here:
https://www.udemy.com/u/kenneymencher/
Join our Facebook group:
https://www.facebook.com/groups/SurveyArtHistory/

6
"On that journey as I drew near to Damascus, about noon a great light from the sky suddenly shone around me.
7
I fell to the ground and heard a voice saying to me, 'Saul, Saul, why are you persecuting me?'
8
I replied, 'Who are you, sir?' And he said to me, 'I am Jesus the Nazorean whom you are persecuting.'
9
My companions saw the light but did not hear the voice of the one who spoke to me.
10 I asked, 'What shall I do, sir?' The Lord answered me, 'Get up and go into Damascus, and there you will be told about everything appointed for you to do.'
11 Since I could see nothing because of the brightness of that light, I was led by hand by my companions and entered Damascus.
12 "A certain Ananias, a devout observer of the law, and highly spoken of by all the Jews who lived there,
13 came to me and stood there and said, 'Saul, my brother, regain your sight.' And at that very moment I regained my sight and saw him.
14 Then he said, 'The God of our ancestors designated you to know his will, to see the Righteous One, and to hear the sound of his voice;
15 for you will be his witness 2 before all to what you have seen and heard.


For full text of the passage go here: http://www.nccbuscc.org/nab/bible/acts/acts9.htm

Context: Caravaggio's Conversion of Paul, was considered scandalous because in it he devotes so much of the canvas to the horse's rear. Visually he is literally "mooning" the audience. Observers also found Paul's prone position and the intermingling of his limbs with the horses somewhat objectionable. 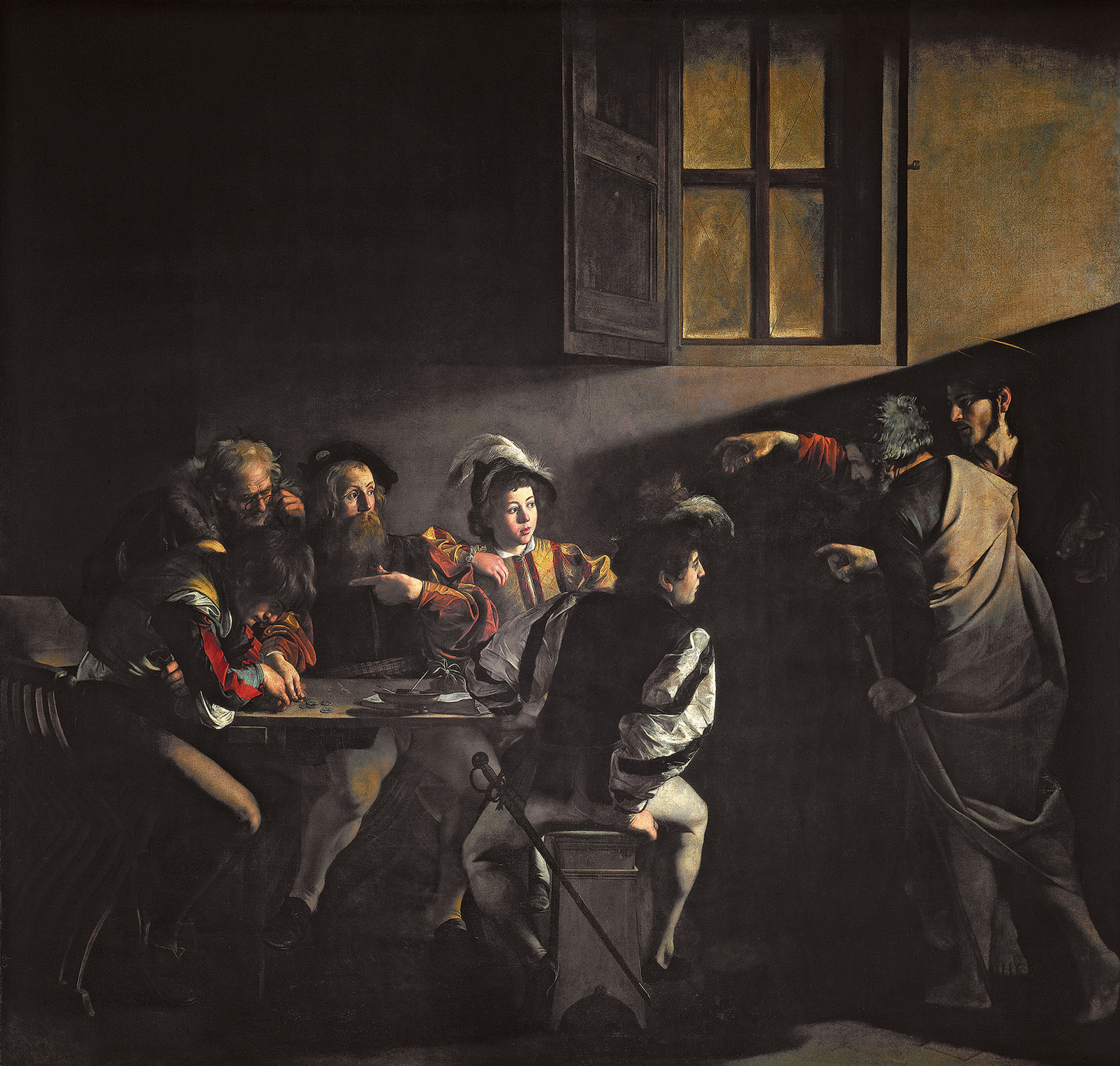 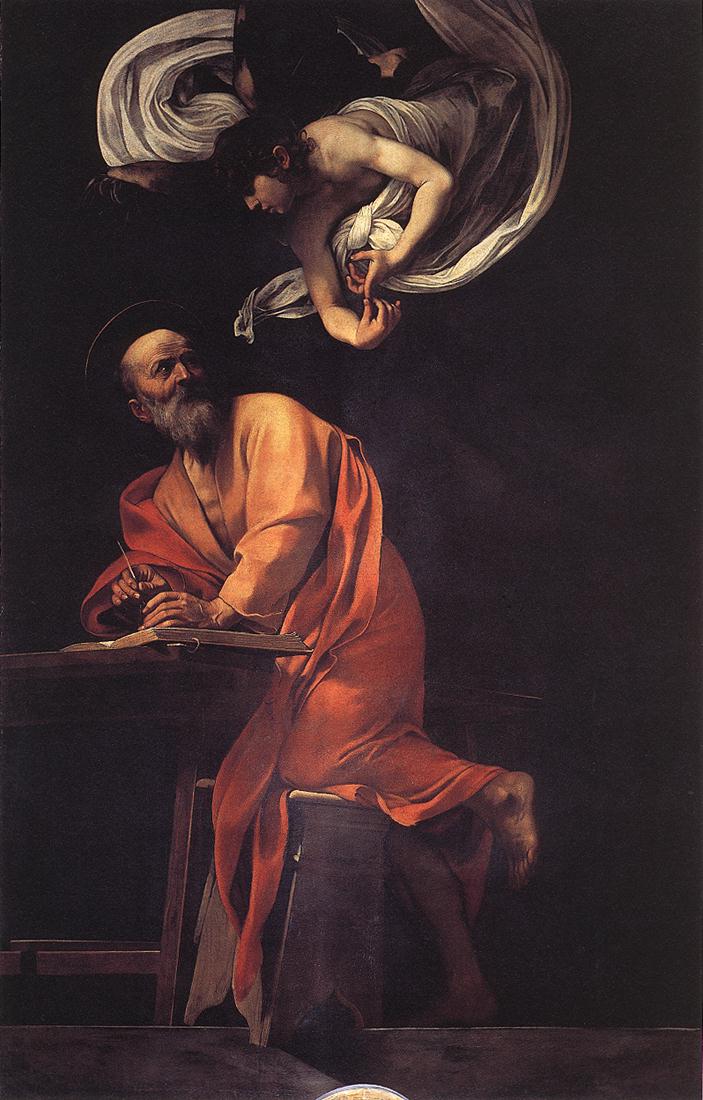 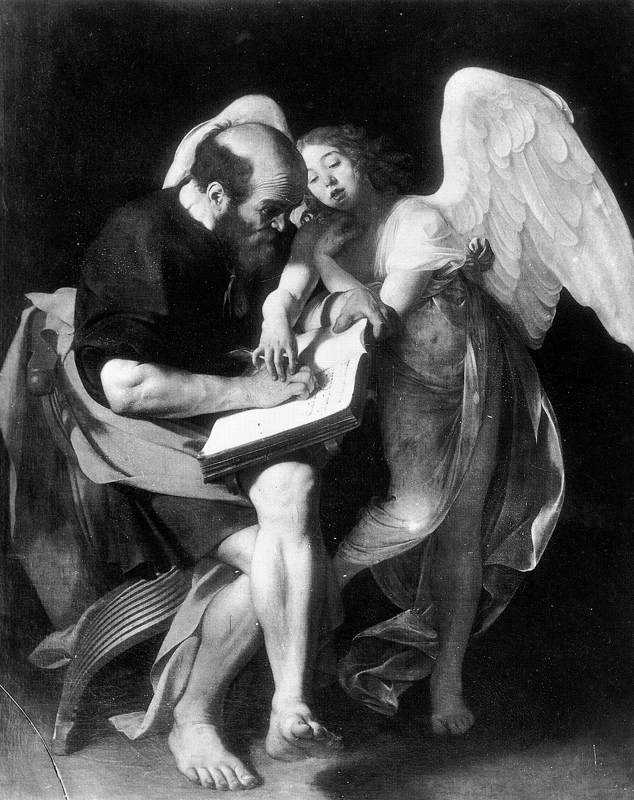 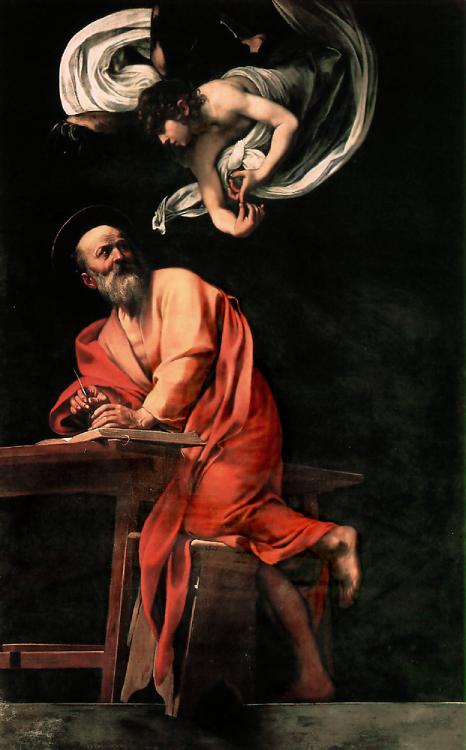 1
1 He entered a boat, made the crossing, and came into his own town.
2
And there people brought to him a paralytic lying on a stretcher. When Jesus saw their faith, he said to the paralytic, "Courage, child, your sins are forgiven."
3
At that, some of the scribes 2 said to themselves, "This man is blaspheming."
4
Jesus knew what they were thinking, and said, "Why do you harbor evil thoughts?
5
Which is easier, to say, 'Your sins are forgiven,' or to say, 'Rise and walk'?
6
3 But that you may know that the Son of Man has authority on earth to forgive sins" --he then said to the paralytic, "Rise, pick up your stretcher, and go home."
7
He rose and went home.
8
4 When the crowds saw this they were struck with awe and glorified God who had given such authority to human beings.
9
5 6 As Jesus passed on from there, he saw a man named Matthew sitting at the customs post. He said to him, "Follow me." And he got up and followed him.
10 While he was at table in his house, 7 many tax collectors and sinners came and sat with Jesus and his disciples.
11 The Pharisees saw this and said to his disciples, "Why does your teacher 8 eat with tax collectors and sinners?"
12 He heard this and said, "Those who are well do not need a physician, but the sick do. 9
13 Go and learn the meaning of the words, 'I desire mercy, not sacrifice.' 10 I did not come to call the righteous but sinners."
http://www.nccbuscc.org/nab/bible/matthew/matthew9.htm
Almost the the same account is given in Luke 5:27 http://www.nccbuscc.org/nab/bible/luke/luke5.htm


al.le.go.ry n, pl -ries [ME allegorie, fr. L allegoria, fr. Gk allegoria, fr. allegorein to speak figuratively, fr. allos other + -egorein to speak publicly, fr. agora assembly--more at else, agora] (14c) 1: the expression by means of symbolic fictional figures and actions of truths or generalizations about human existence; also: an instance (as in a story or painting) of such expression 2: a symbolic representation: emblem 2
apoc.ry.pha n pl but sing or pl in constr [ML, fr. LL, neut. pl. of apocryphus secret, not canonical, fr. Gk apokryphos obscure, fr. apokryptein to hide away, fr. apo- + kryptein to hide--more at crypt] (14c) 1: writings or statements of dubious authenticity 2 cap a: books included in the Septuagint and Vulgate but excluded from the Jewish and Protestant canons of the Old Testament b: early Christian writings not included in the New Testament
apoc.ry.phal adj (1590) 1: of doubtful authenticity: spurious 2 often cap: of or resembling the Apocrypha syn see fictitious -- apoc.ry.phal.ly adv -- apoc.ry.phal.ness n
ar.ca.di.an adj, often cap (1589) 1: idyllically pastoral; esp: idyllically innocent, simple, or untroubled 2 a: of or relating to Arcadia or the Arcadians b: of or relating to Arcadian Ar.ca.di.an n (1590) 1 often not cap: a person who lives a simple quiet life 2: a native or inhabitant of Arcadia 3: the dialect of ancient Greek used in Arcadia
According to the Brittanica,
Modern Greek ARKADHÍA, mountainous region of the central Peloponnesus of ancient Greece. The pastoral character of Arcadian life together with its isolation partially explains why it was represented as a paradise in Greek and Roman bucolic poetry and in the literature of the Renaissance. The region is not exactly coextensive with the present-day nomós (department) of Arkadhía, which extends on the east to the Gulf of Argolis. The capital of the nomos is Trípolis.


genre n [F, fr. MF, kind, gender--more at gender] (1770) 1: a category of artistic, musical, or literary composition characterized by a particular style, form, or content 2: kind, sort 3: painting that depicts scenes or events from everyday life usu. realistically
he.do.nism n [Gk hedone pleasure; akin to Gk hedys sweet--more at sweet] (1856) 1: the doctrine that pleasure or happiness is the sole or chief good in life 2: a way of life based on or suggesting the principles of hedonism -- he.do.nist n -- he.do.nis.tic adj -- he.do.nis.ti.cal.ly adv
neo.clas.sic or neo.clas.si.cal adj (1877): of, relating to, or constituting a revival or adaptation of the classical esp. in literature, music, art, or architecture -- neo.clas.si.cism n -- neo.clas.si.cist n or adj