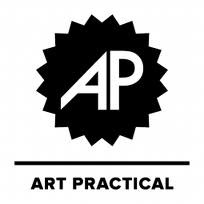 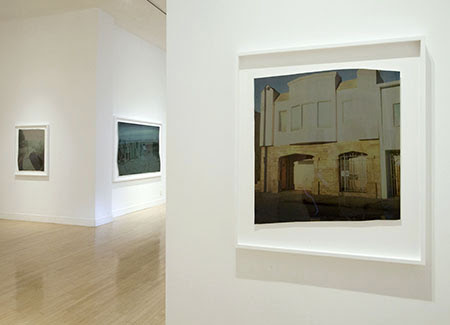 John Chiara's photographs of San Francisco omit the familiar icons that dominate popular perception of the city: Victorian row houses, cable cars, the Golden Gate Bridge. What Chiara captures is more subtle, but no less recognizable: a certain quality of light, filtered at times through fog or glaring off of the peach-and-white Mediterranean palette of the city's lesser-traveled neighborhoods. In the eighteen photographs that make up the exhibition de • tached at Haines Gallery, Chiara explores the Sunset, Excelsior, Ocean Beach and Visitacion Valley, inscribing his vision of the built environment into the collective memory of San Francisco.

Installed in a row near the beginning of the exhibition, Chiar's Somerset series transports the viewer down Somerset Street between Felton and Silliman in the Excelsior neighborhood. In each of the five photographs, the artist frames a house as viewed from the street. As the perspective shifts in each image, from 161 Somerset at Felton (2014) to 137 Somerset (2013), the effect is of looking out the window of a car as it drives down the street. The sense of irreverence and immediacy in the angular, haphazard composition and hastily trimmed, irregular paper of each photograph belies Chiara's meditative, time-consuming process. The artist employs his signature camera obscura, shooting positives onto Ilfochrome paper. What distinguishes these photographs from earlier work, such as the exhibitions Crestmont at Coral (2012) and Fort at Lime Point (2011), is the exposure. Take 167 Somerset at Felton (2013), depicting a midcentury house typical of the neighborhood. Here, Chiara overexposes the image to such a high degree that the shadows lose their density and opacity. Power lines raking across the facade of the house register as harsh white lines, and architectural details are flattened. The beiges and whites that dominate these neighborhoods are rendered glaring and bright in Chiara's lens. This unflinching perspective forces the viewer to reconcile halcyon images of San Francisco with these washed-out homes, frozen in time.

Unlike Chiara's past exhibitions, de • tached uses installation to amplify the content of each photograph. For example, a grid of nine photographs on the back wall of the gallery reads like a page torn from a real-estate magazine. Presented in this way, the large-format prints overwhelm as the viewer attempts to differentiate one stark home from another-a feeling heightened by the fact that some images are alternate views of houses that appear in other photographs in the exhibition. Chiara's emphasis on banality and repetition echoes Ed Ruscha's Some Los Angeles Apartments and the work of New Topographics photographers like Lewis Baltz and Robert Adams.

In contrast to these blinding streetscapes are a handful of muted, moody landscapes. The Great Highway at Balboa (2014) depicts Ocean Beach in the blue-green light of a cloudy day. Here, Chiara draws the viewer into the photograph with two crisp parallel lines cutting diagonally across the image: one where the sand meets the waves, and the other where the sea meets the sky. Tape residue from where the paper attached to the inside of the camera obscura mars the lower third of the photograph, but oddly doesn't distract from its ethereal quality. Rather, like in the overexposed photographs of homes, Chiara evokes a San Francisco that is both familiar and new.
- Danica Willard Sachs

To read the review online: www.artpractical.com

For more photos from the exhibition: www.hainesgallery.com